Finally, a Swamp Thing appearance outside of ST series 1! When I started rereading the chronology, I was very excited to see what Swampy appearances continued plot lines and which ones were one-off stories.
This issue deviates from the ongoing plot line of Swamp Thing (series 1) but there are references to past ST issues (primarily 1, 7 & 13). None of the Swamp Thing books from series 1 reference this Brave & Bold/Gotham encounter but based on Batman’s flashbacks and narration, this storyline would have taken place between ST issues 7 and 22.

If I had a nickle for every time Swampy got strung up by a bunch of yahoos, I’d have a few shiny nickles. 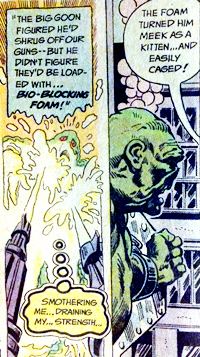 It looks like BB’s goons used the same goop that captured Swamp Thing in issue 13.

Storm Unit Alpha has got the goods! 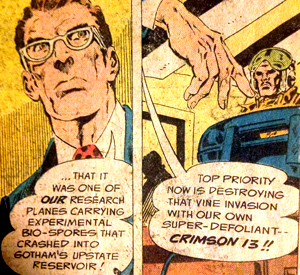 So we meet again Agent Jonathan Zero. We learn in later ST books that Zero becomes a pesky costumed villain. His alter ego doesn’t debut until issue 23 which leads me to believe this book falls within the previously stated ST issues 7 & 22.

Words to live by.

First  Swamp Thing is brooding over the hatred in man and now he and Bats are swinging around like kids on a playground. Where is the focus? Where is their drive?

“Like pygmies lost in a gigant…..” what’s wrong with your neck Batman?

Swamp Thing is always good for a farewell wave.

I love hotdogs. I would be devastated by a prank so dirty.

“Cigarettes from everywhere” was my grade school catch phrase.

I have been on the look out for this vinyl record for a very long time. 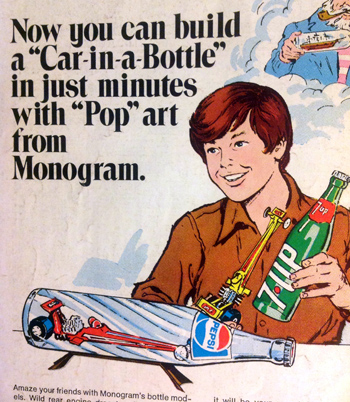 What kid wouldn’t want to build a car and then keep it in a bottle, never to be played with again?