There are two notable books in Swamp Thing’s history that never saw the light of day. The first book is issue #25 of series 1 and the second is issue #88 of series 2 (Rick Veitch’s time traveling Christ issue). Most Swampy fanatics have seen the unfinished pages and/or scripts but in case you haven’t, here is (well, most of it anyhow) the unpublished Swamp Thing #25 (series 1) by Ernie Chan and Fred Carillo. 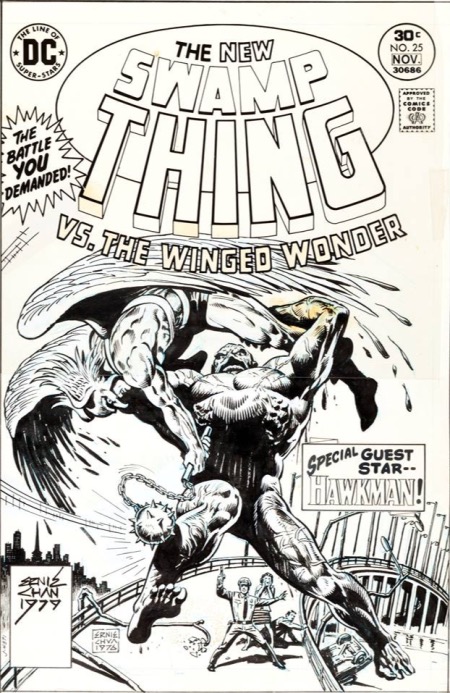 Swamp Thing #24 ended with the mention of an issue #25, pitting Swamp Thing versus Hawkman. Due to poor sales and decreased readership DC canceled the series and the book and subsequent story line went unfinished.

Many of these pages went up for auction a while back. The lucky collector who purchased the pages asked Yanick Paquette to create a cover for the story since the original cover had yet to surface. Paquette said he was asked to create the cover in the style of his New 52 Swamp Thing (below). Paquette drew the cover in 2013. Later that year the original, unfinished cover was discovered by Heritage Comics Auctions (above).

Page 1/Title page, pencils
Based on the bottom panel, and how issue #24 ended, I’m going to guess that Alec Holland and Ruth Monroe fled the scene after Thrudvang’s tragic, Temple of Doom style demise. Maybe, while fleeing the scene, they were pursued by Colossus resulting in them crashing their truck. I don’t know, just guessing. 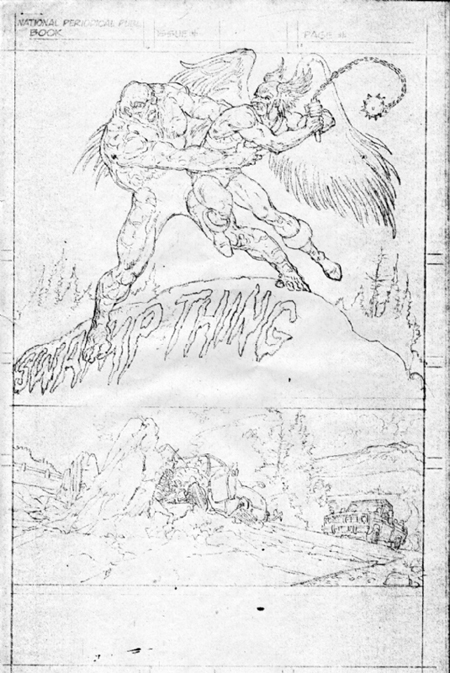 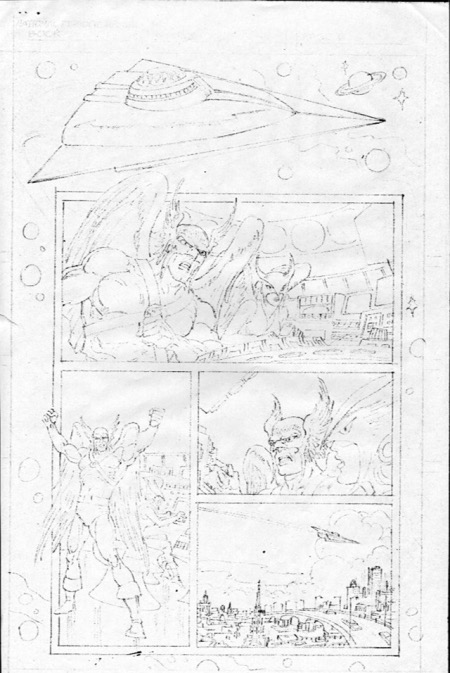 The above page is quite rough and unfinished. Yanick Paquette was asked to recreate/finish the page, yet again, by the issue #25 auction winner. The finished product is pretty great (below). 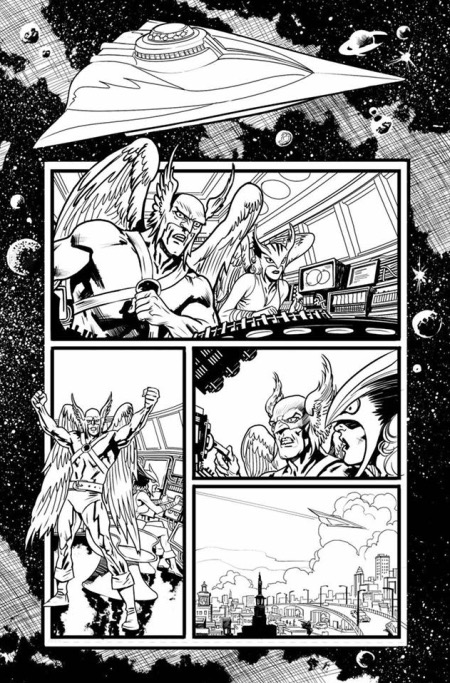 Page 9
I’d imagine the previous 7 pages, that are missing here, would explain how Alec Holland turned back into Swamp Thing from when we left off in issue #24. This issue picks up with Swamp Thing on the run, foolishly making his way through downtown Portland. The police do all they can to stop the muck-monster. Hawkman attempts to intervene amid the mayhem.

Sabre fancies himself a regular, ol’ Elmer Fudd type hunter, as seen above.

Page 12
Swamp Thing’s poses are a little wonky throughout the book. The first panel (of page 12) seems to have some anatomy issues. After Sabre is done with his tall tale, Edward Holland jumps in, corroborating the lies. Edward’s evil ways are finally revealed. What a horrible brother.

Page 13
The way Swamp Thing is depicted in this story reminds me of Nestor Redondo’s Swamp Thing.

Page 14
Unfortunately, all of the pages haven’t been accounted for. That, or I didn’t have any luck tracking them down. Either way, it’s fun to see a number of them, stringing the story together.

Swamp Thing, the “mute, murdering menace” has a nice ring to it, Hawkman. 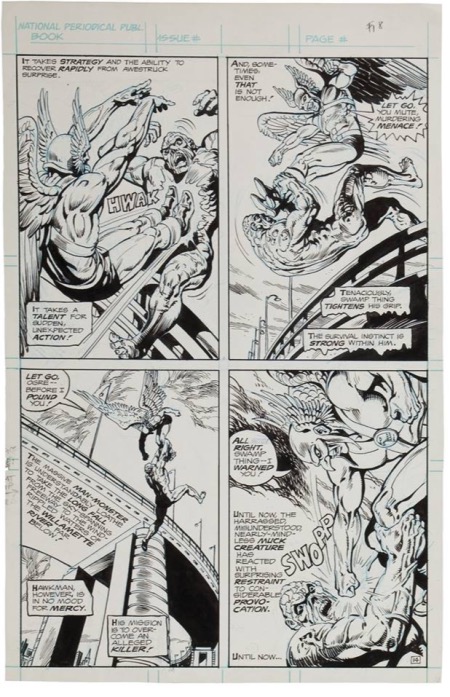 The issue pushes Swamp Thing in a different direction. He is described as mindless, confused and rage filled. These aren’t the same characteristics that we typically see throughout the first series. In previous issues from series 1, he was moved to anger and action while protecting the innocent and battling evil; hardly mindless. With this new tendency to lose control of his emotions and rational thought, along with being able to change back-and-forth between human and muck-encrusted forms (see last page, below), I wonder if the creative team was trying to establish some sort of Hulk/Bruce Banner type scenario for Swamp Thing. Again, I am missing numerous pages from this story, Alec’s brother has turned against him and Alec is most likely terrified after being transformed back into Swamp Thing. These elements alone would explain a great deal but I thought I’d throw my Hulk-like Swamp Thing theory out there, for entertainment purposes.

I believe it’s worth mentioning that in Challengers of the Unknown #83, while assisting the Challengers, Edward Holland’s antidote wears off turning Alec back into Swamp Thing for good. That issue of Challengers came out in November of 1977, a year after this issue would have been published (November 1976). It isn’t explained but I suppose we are to assume that Edward’s antidote lasted for a year. That is also assuming that the timelines for both books match-up, which I doubt.

Page 16
I’m missing page 15 but based on the narrative, while tussling in midair, Swamp Thing clocks Hawkman rendering him unconscious. He damages Hawkman’s medallion device which controls his anti-gravity belt. Hawkman rises uncontrollably out of sight while Swamp Thing plummets into the Willamette River, below. 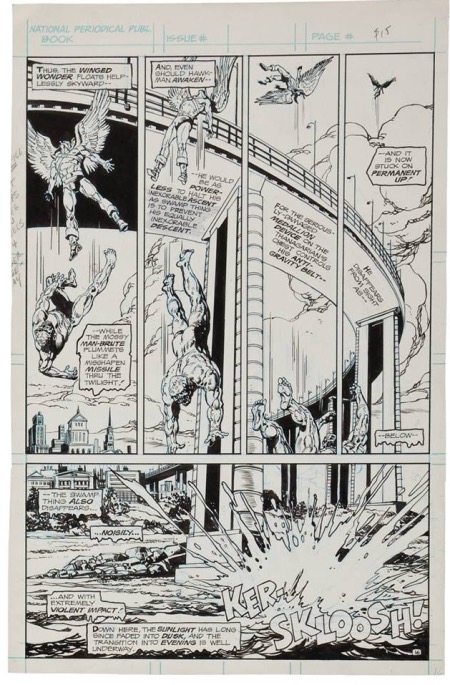 Page 17
As you can see, Swamp Thing turns back into human form (Alec) at the end of the issue. I’m not sure if this ability/occurrence was to carry over into other series 1 issues but it’s surely a residual effect of Edward Holland’s meddling (Swamp Thing #23). Alec mentions that he can not remember his actions after turning into Swamp Thing, as if he blacked out. Ruth and Alec plan to go into hiding as Collossus vows to step up their efforts.

The final panel mentions, The Fire Master. I would love to see what he or she looked like as well as it’s plans for Swamp Thing.

17 thoughts on “The unpublished Swamp Thing 25”