This issue of Comics Scene features a couple articles relating to our favorite muck-encrusted monster. An article focused on the animation industry mentions plans for a Swamp Thing animated series. Plans for the series were rolling as far back as 1982 but never saw the light of day until 1991. The series only lasted 5 episodes.

It’s funny how the article mentions that no swamp vehicles will appear in the series. We did indeed see a few swamp mobiles make their way into the cartoon and onto the shelves of toy stores. I’d imagine the marketing team saw dollar signs in the form of action figures and marketable goods relating to the show. I’m quite glad a “Swamp Wife” and “Swamp Kids” didn’t show up seeing that Swamp Thing already had his love, Abby.

I’m a big fan of Carl Barks and the illustrated worlds he creates. I grew up watching Duck Tales and try to get my hands on any Scrooge McDuck or Beagle Boys related items I can. These images of Barks’ painting in progress was too good to share. 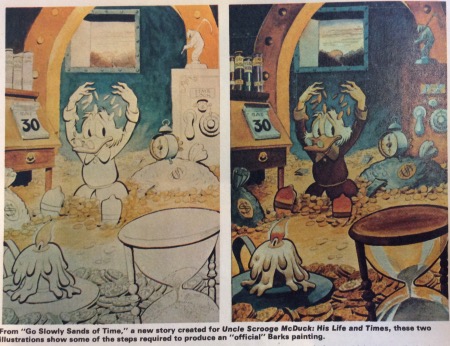 A Buster Keaton magazine would be VERY interesting. I’m not sure if the magazine ever came to fruition. I quick search on the internet didn’t yield any results.

This photo of Dick Durock in between takes warrants a caption contest. I bet they are talking about what’s for dinner later tonight.

This little blurb is located in the back of the book, advertising features in the upcoming issue #3.