It’s been a busy month so far and I’ve been meaning to post this issue for a couple weeks now. This is an exciting book because after this issue I’ll be moving onto the Moore years. They’re some of my favorites and I have a feeling, how they breathed new life into Swamp Thing, they will do the same to my website. The hype and popularity that surrounded Moore’s Swampy run generated many articles, interviews, parody strips, merchandise… all sorts of content. Lately, I’ve been busy tracking down obscure appearances and foreign articles. My chronology list has grown quite a bit and I’m excited to write about the many appearances that are interwoven throughout Moore’s run. Stay tuned for all sorts of fun posts along with updates on SiouxperCon. The Sioux Falls based comics convention is in less than a month and I’ll be prepping for a Swamp Thing panel that I’m hosting. Phil Hester will be sitting in on the panel and I’ll be exhibiting my Swampy collection on the convention floor. It’s going to be a great time. Now, without further ado…Saga 19.

Back at the Cable cabin, Matt’s delusions have caused a considerable amount of trouble. Abby is out cold, surrounded by flames and Swampy is the only one capable of saving her. Swampy puts the flames out using the moisture in his body.

Issues 18 and 19 establish Cable’s psionic powers. Matt realizes he can conjure monsters. He goes on to tell Swampy a little more about the electroshock, brainwashing and torture he endured in the hands of the DDI. Although Abby, Matt and Swampy are relatively safe for the moment, the situation quickly spirals out of control; out of the fire and into the frying pan.

As we saw in the previous issue, Arcane is back on the scene, has Dr Kay and is turning him into an Un-Man.

The title page is horrifically wonderful. Kay is done for; the most recent poor soul to fall victim to Arcane’s wicked experiments.

The panel above is quite amusing. Last time Arcane was rebuilt he had fallen from his castle (series 1). Luckily Cranius had the wherewithal to rebuild Arcane, although a little shoddily. This time around, Arcane’s Un-Men did an even worse job than before. As stated above, Arcane do some tweaking and built himself an exoskeleton.

always happy to find the time to tell everyone of his super genius, villainous ways.

After Arcane’s lengthy exposition he sets his sights on seeking revenge, once again, trying to obtain Swamp Thing’s powers and form. Arcane’s ship has some pretty neat technology. It has everything from telescoping bug yes to magic teleporting doors. 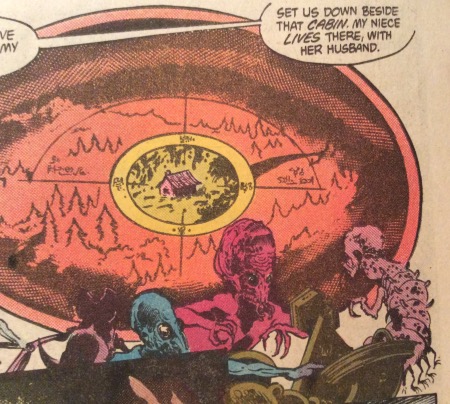 Meanwhile, Cable continues his backstory back at the cabin. 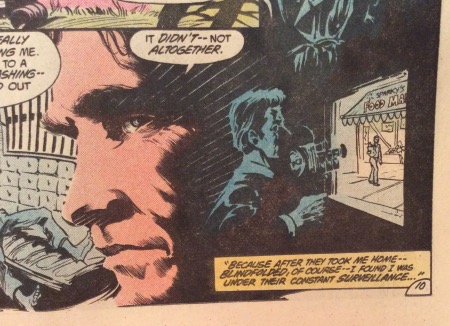 Last we saw Liz and Barclay they were headed back to the motel to get supplies to help Matt Cable. On the way, they run off the road and their truck breaks down. Liz seduces Barclay in order to avoid returning to help Swampy and friends. They finally have a moment of intimacy. Barclay’s will is paper thin.

Cable takes a blast to the face while Arcane pulls the ol’ bait and switch routine. Luring Abby and Swampy out by dangling Dr Kay like a carrot. The artwork of Arcane in this panel is awesome!

The whole crew gets taken aboard Arcane’s craft. 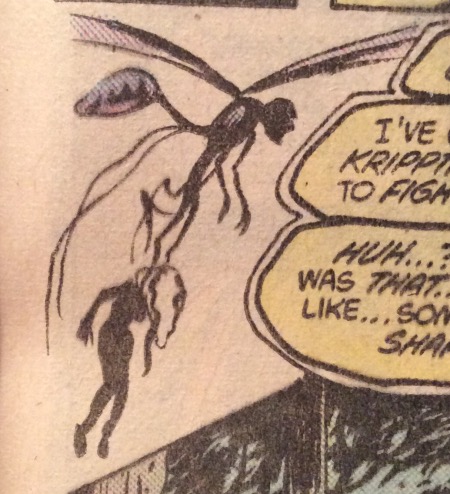 I love the color gradient and detail on the Un-Man’s eyes, below.

Swampy and Abby are detained on Arcane’s ship. Arcane tries to take over Swampy’s body, persuading him by torturing Abby. Luckily, Dr Kay chews his way out of his cocoon in time to save the day. He sacrifices his mutated, monstrous form by jumping into the path of Arcane’s psionic blast, saving Swamp Thing’s life.

Dr Kay and Arcane are destroyed by the blast.

Without a leader to control them, the Un-Men run wild, devouring Arcane.

Swamp Thing frees Abby and the two escape from Arcane’s ship that is now breaking apart, plummeting toward the ground. Once Abby and Swamp Thing are safe on land, Swampy tells Abby that he’ll set out to find the wreckage of Arcane’s ship and find proof that Arcane is finally dead. The final panel shows Arcane looking a lot like Lon Chaney from The Phantom of the Opera. 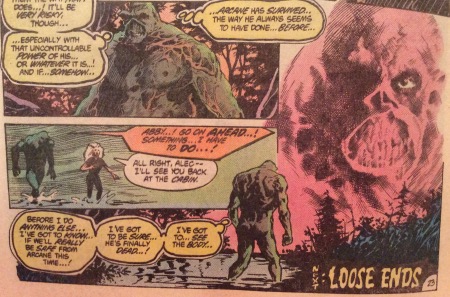 Letters Page:
the letters page in this issue is great. There is an explanation of Martin Pasko’s exit from Swamp Thing and Moore’s entrance.

This may be my favorite letter. I couldn’t agree more. The non-stop exposition in almost ever issue and a story that could have been condensed into fewer books was too much for me. By the time the story wrapped up, I had little interest in how everything was resolved. I just wanted Swamp Thing to return home and move on. I recognize the merits and hard work that went into the beginning of the first series but Moore’s start couldn’t come soon enough. It’s truly a breath of fresh air.