Last night I flew back home from a fun filled week in Savannah, where I’m originally from. While there, I officiated my brothers wedding, caught up with old friends, visited the filming location of the Return of Swamp Thing, went on a Swamp Thing treasure hunt, got a Swamp Thing tattoo and much more. I can’t wait to share some stories of my trip. Until then… 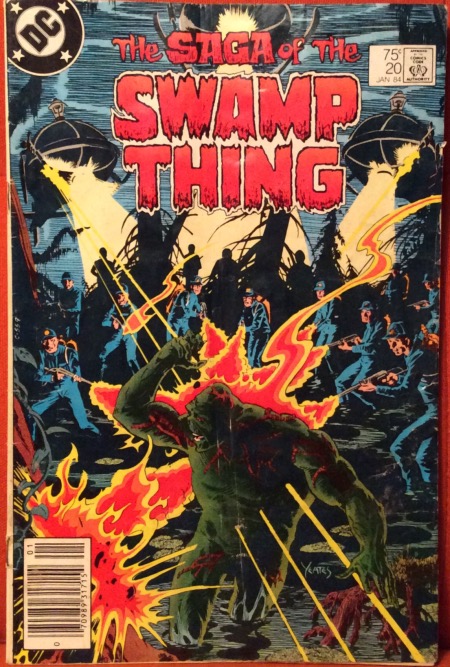 Alan Moore’s first of many great Swamp Thing books. He breathes new life into the character and begins in an almost poetic tone, delving into Swampy’s feelings. 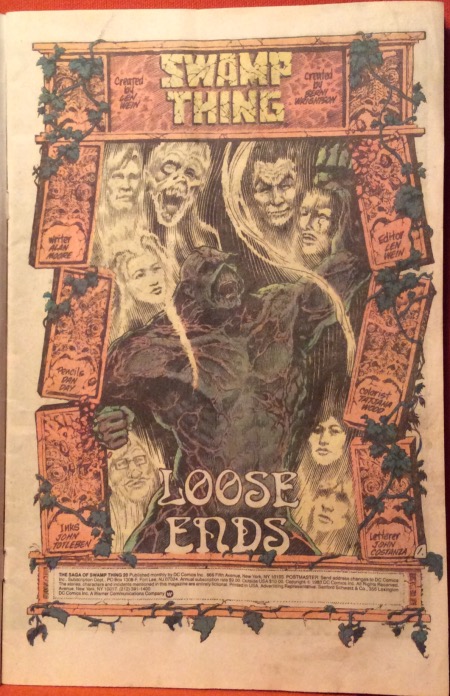 Continuing where issue 19 left off, Swamp Thing follows the trail of wreckage leading to Arcane’s body. Moore presents an almost Shakespearean like encounter as Swampy comes to terms with finally meeting up with his long time adversary and the only person who could change him back into a human. Moore explores their similarities as well as opposing views toward life and being human. Despite the hatred the two share for each other, Swamp Thing takes the time to put Arcane to rest. …until next time 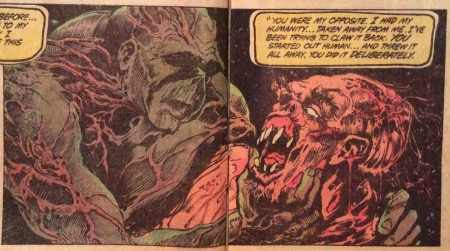 Liz and Barclay wake up after an evening of hanky-panky in a broke-down pickup truck. Liz, yet again, pulls the rug out from under Dennis by telling him their relationship is nothing more than a tryst on the run amid chaos. Meanwhile, government goons are hot on their trail already. 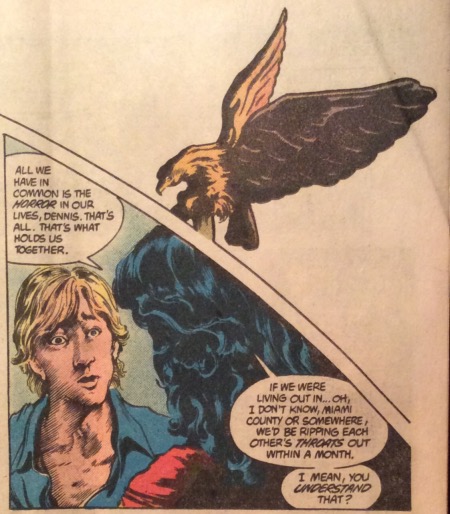 Like most stories, Swamp Thing has very little time to recoup and establish any sense of normality. Sunderland, the DDI and Dwight are already on their way to Cable’s cabin to destroy all evidence of their existence. Barclay, Tremayne, the Cables and Alec are the only ones aware that Sunderland and the government have been working together for some time. This knowledge makes them dangerous to the wrong people. 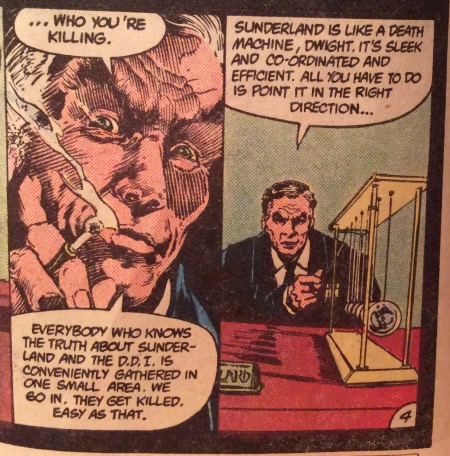 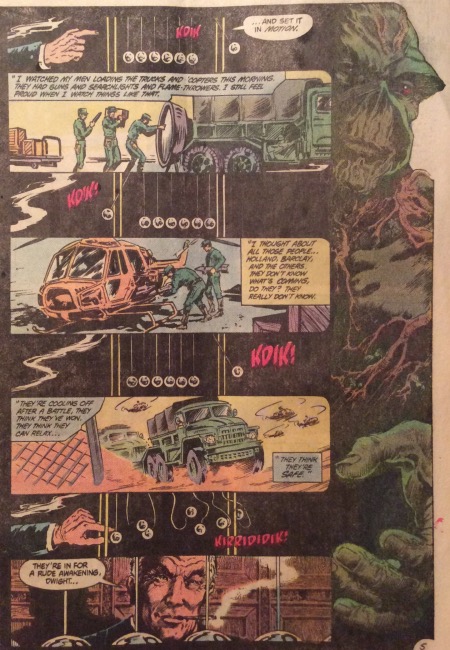 Abby makes her way back to her cabin. Matt tries to convince her that everything is ok, that he has harnessed his powers and demons. Nothing could be further from the truth. Matt Cable is spiraling out of control. His demons manifest. 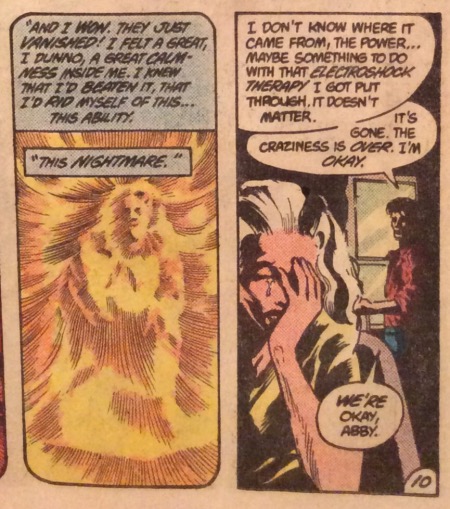 Back at the New Moon Motel, Liz and Dennis work on getting their belongings and going their separate ways. Liz reluctantly allows a stranger to retrieve her things from her room but it’s a good thing she does. 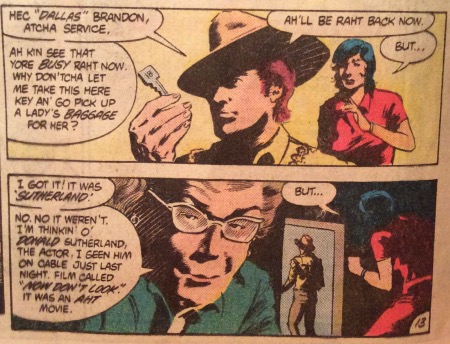 Liz and Barclay narrowly escape being killed by the Sunderland/Government goons. 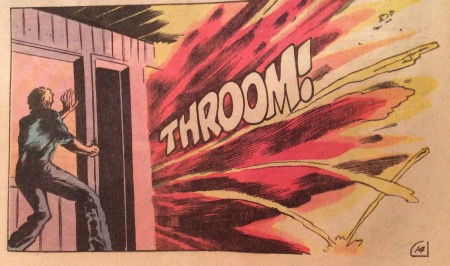 I love the sequence of panels below. Swampy takes no prisoners. 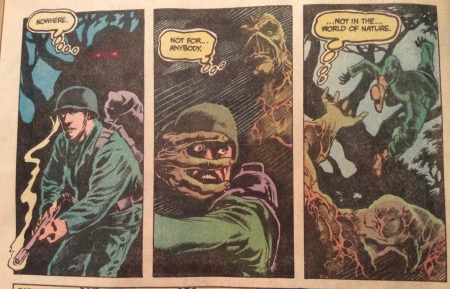 Soldiers begin to narrow their search, trying to draw Swamp Thing out from the woods using flame throwers and high powered search lights. 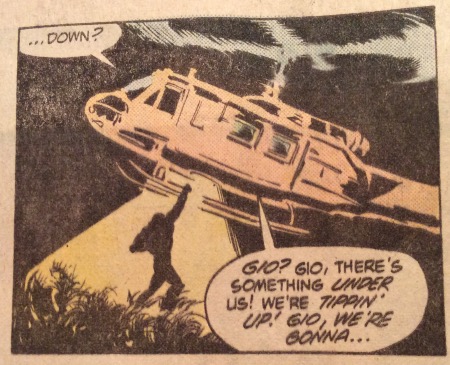 The book comes to a dramatic end with Swamp Thing being taken down. The soldiers presume he is dead and take his body into custody. 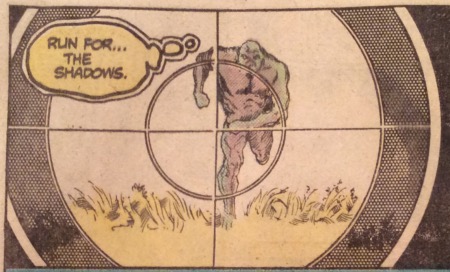 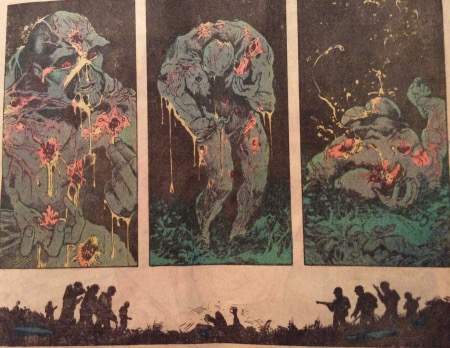 I love the irony of Moore starting his run on Swamp Thing by killing him off in the first issue. Starting with death and moving into creation is a great concept. 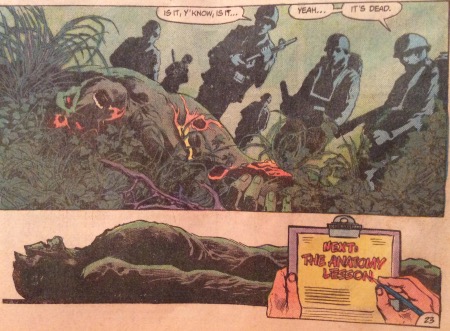