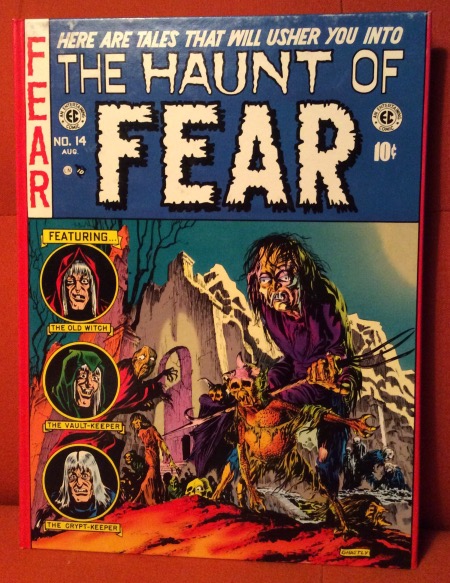 Five months ago I wrote a post focused on Comic Artist #1 (Spring 1998). The magazine featured a great article with interviews from Len Wein, Berni Wrightson and Joe Orlando. The three Swamp Thing creators briefly discuss the creative process and origins of their famous muck monster. Indeed, there are a number of Swamp Monsters throughout the history of sci-fi and horror literature that inspired the creation of Swamp Thing but Orlando mentions that the first Swamp Thing story from House of Secrets #92 was also inspired by the story, Gorilla My Dreams from The Haunt of Fear #17 (1953). Well, he doesn’t specificly mention issue #17 but through a good bit of research and  chatting with fellow Swamp Thing fanatic and guru, Rich Handley, I came to the conclusion that this was indeed the book Orlando was referencing.

“… the first story was done in House of Secrets and I fed to Len the idea from an old EC story that I loved where they took the brains out of this guy and put it into an ape and the last panel is that it’s Christmas time and he looks into the window of his home and sees his wife and children celebrating Christmas and there’s a picture of daddy. The family turns and screams and he has to run and leave. I thought that that’s such a powerful idea and it’s in the first Swamp Thing story.”
-Joe Orlando

His recollection of the story is a little fuzzy but the gist is understood, as you will see in the following images. Since I love researching Swamp Thing, I had to find this issue and share it with you fellow Swampy fans. Turns out the original book is tough to come by and is currently selling for more than I’d like to spend. The book has been reprinted a few times and I haven’t had much luck tracking one down until today! This good looking, 9″ x 12″, 172 page, black and white hardcover collects The Haunt of Fear (EC Comics 1950-1954) issues 12-17. The collected Golden Age tales of horror features stories by Gardner Fox, Harry Harrison, Al Feldstein, Jack Davis and Wally Wood.

I immediately got home and dug into the book. The stories are horrific and wonderful! Gorilla My Dreams was better than I could have hoped. I certainly can see why Orlando would want to borrow the emotions and themes depicted in the short story.

Philip Stoker is a business man on his way to work. He leaves his beautiful family for the city, as he does everyday. 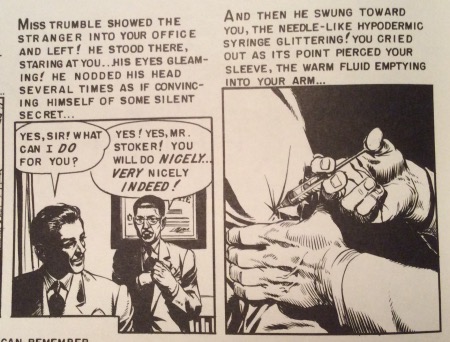 A stranger has arrived at his office, first thing in the morning, to meet with Mr Stoker. Before Stoker can understand the situation at hand he is drugged unconscious.

Stoker wakes to find himself strapped to an operating table. Only, he isn’t himself. His brain has been transplanted into a gorilla!

Confused by his predicament, Stoker panics and thrashes about resulting in the psychotic captor suffering a heart attack.

The only person on earth who knows what happened and who could possibly return his brain to his human body is now dead. The plot thickens along with Stoker’s dispair.

Feldstein and Evans do a great job of sucking the reader in. Poor Mr Stoker has fallen victim to a horrible fate. His panic, confusion and urgency is palpable.

Mr Stoker finally makes it back to his house. He is at a complete loss trying to come to grips with his situation and how to make everything right again. 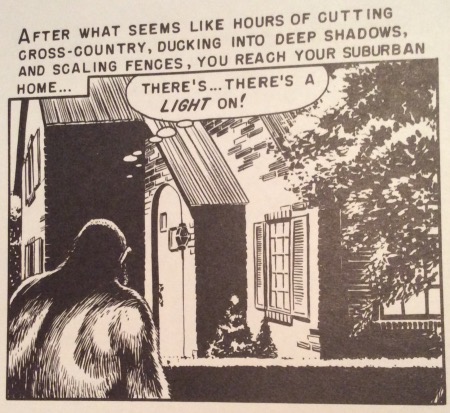 Below is the panel that Orlando was referencing from his interview in Comics Artist #1. It’s not Christmas and there is no picture of “daddy” but there doesn’t seem to be any other EC stories that come so close to Orlando’s description.

The despair, loss and loneliness that Stoker experiences in this story is very similar to that which Alex Olsen endures in House of Secrets #92.

The tragic story ends with Mr Stoker ironically joining the same carnival troop that the scientist stole the ape from. While on tour, he eventually runs into his family. They believe the ape killed their father, not knowing that the ape is their father. 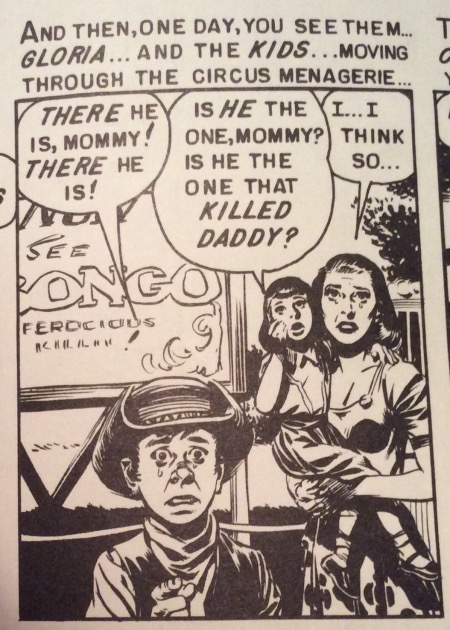 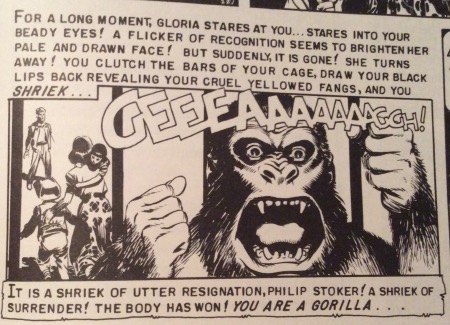 The Haunt of Fear #17 also features a story set in the bayou of Louisiana! Gorilla My Dreams may not have been the only story in this book that influenced HOS #92.

A man in a Louisiana swamp diverts traffic from the main road to his secluded home in order to provide his homicidal brother with victims to dismember.

“I wanted to reach Houma by dark!”

as you can imagine, she doesn’t make it to Houma but I sure did get excited when I saw Swamp Thing’s home town mentioned!

After murdering their house guests, the two twisted brothers dump the bodies in the surrounding swamp. The story ends when the brothers are visited by their victims and justice is served. Well, as much as the walking dead can serve up justice.