A number of great comics came out this week and I’m looking forward to writing about those that feature Swamp Thing. I’m also hoping to find a moment in the next couple of days to write about Swamp Thing #6, the final issue in the mini-series by Len Wein and Kelley Jones. I loved how they wrapped the series up as well as how they left plenty of doors open to continue the narrative. More on that book later.

This final issue of the Poison Ivy mini-series by Amy Chu, Seth Mann and Clay Mann offers up a great ending to a great series. Like the final Swamp Thing book, this issue also keeps a few doors open to continue and ongoing series if DC chose to move in that direction …which they should. I was so excited to see Swamp Thing make an appearance and help out in battling evil. I was very happy to see that Swamp Thing helps and doesn’t just show up in the final issue and resolve the problem. Chu did a great job of keeping the focus on Ivy and her sporelings.

Swamp Thing shows up to help vanquish Grim, Ivy’s newfound nemesis. He also lends his sage wisdom, warning Ivy of the consequences of tampering with The Green. I could elaborate but I thoroughly recommend reading this mini-series so be sure to check it out and enjoy the action.

Ivy’s coworker and friend, Darshan would be a great character to see developed in a future Poison Ivy series. His encounter with Swamp Thing in this book is very amusing and filled with wrestling references. Darshan apparently thinks Swamp Thing would make for a great WWE wrestler. 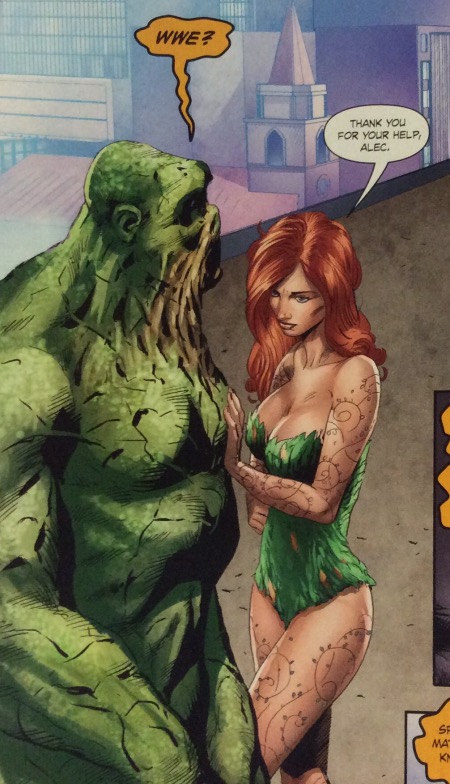 2 thoughts on “Poison Ivy: Cycle of Life and Death 6”