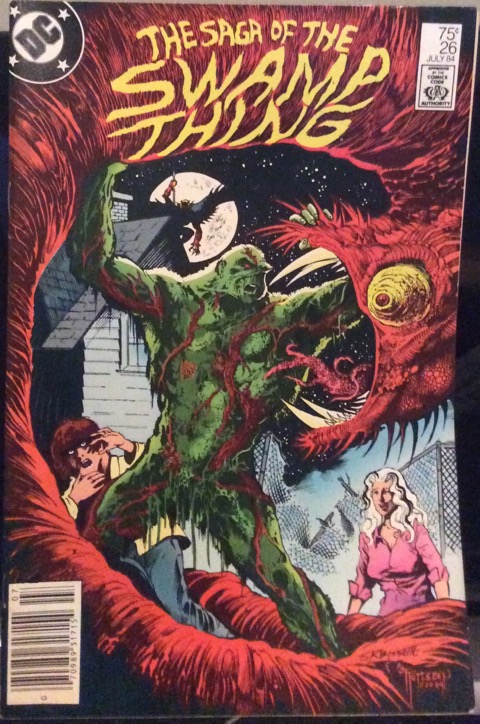 Swamp Fact:
This issue, along with the previous issue 25, are the only books that deviate from the series two Swamp Thing logo until issue 57, where a question mark was added.

This swamp fact is brought to you by the informative fellas at the
Wednesday Comics Podcast.

The book starts out with a frantic foot race to Elysium Lawns; Abby’s new place of employment. Swamp Thing pulls Abby through the marsh, hoping to stop the Monkey King before it’s too late.

“It began with blood.”
Picking up where issue 25 left off: immediately after the marlin skewering of Harry Price, Jason Blood and Abigail Cable visit coffee.

Sure, she’s flustered after witnessing a vehicular homicide by way of giant, game fish, and yes, there are numerous, goofy, bug-eyed fish starring at her from behind Jason Blood, but that’s no reason to overreact to a friendly, foreboding warning from a complete stranger.

“the bad craziness is almost upon you, Mrs. Cable.”
When is it not chaos and craziness for poor, Abby Arcane?
Hardest working woman in Houma.

I love how cool and calm Blood is. This isn’t his first dust-up in the dark arts.

again, the spectacular layouts are worth mentioning. The story feels complex but reads clearly. The creative team does a great job depictng multiple frantic scenarios under a large umbrella of chaos. 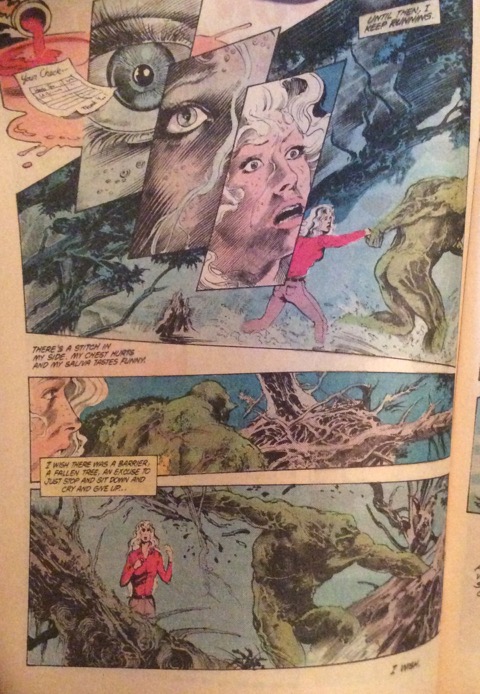 While reading the latest Wein/Jones Swamp Thing Series 6, I was reminded of the panel above. At one point, Jones has Swamp Thing running through the swamp. With the brush of his arm, trees part and are ripped from his path. 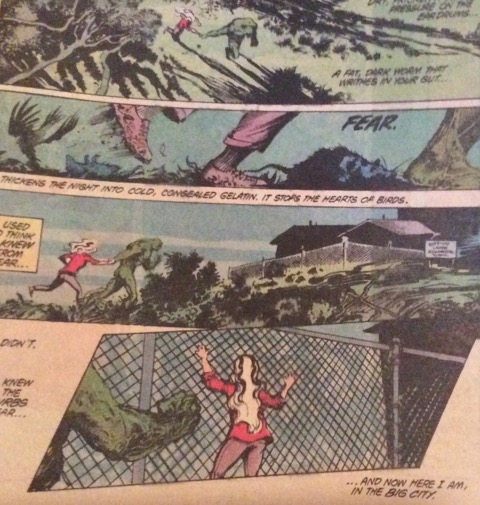 The race to the hospital is interrupted by a flashback.
Abby’s first day of work…

Her first day of work is complete pandemonium. The hospital is electric, the patients acting aggressively and drawing similar doodles of the Monkey King. Trouble continues to brew.

never catching a break, Abby returns home from her first day to deal with a drunk Matt Cable. Like most of their encounters at this point, it ends with an eruption. Side note: when Totleben and Bissette join forces, I appreciate their depiction of Abby as strong, yet tired, with a youthful beauty. She is rendered beautifully in so many panels that they’ve worked on, like the one below. 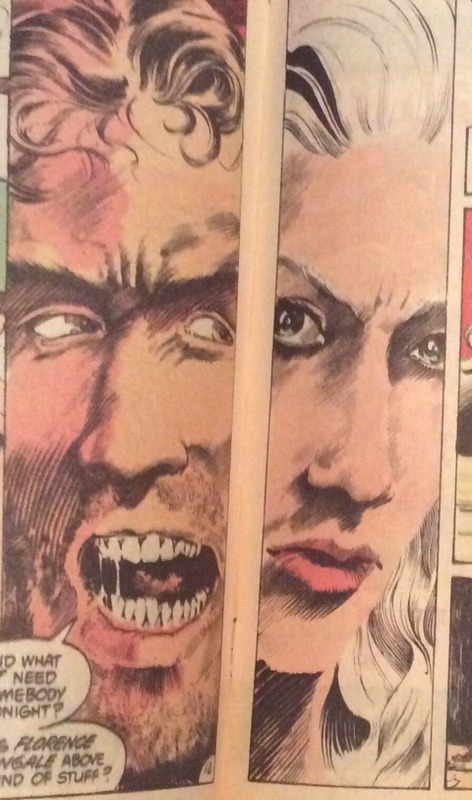 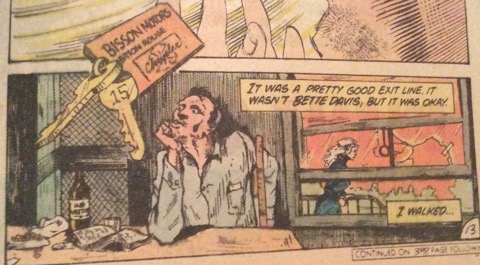 Back to the present:
Swamp Thing rips down the perimeter fence. It’s a mere cob web to him.

They make a mad dash to the hospital. It’s quiet.

Amidst the panic, Abby realizes that Swamp Thing is her rock, the only person she can trust and rely upon.

they take a moment on the front lawn. They know something is wrong; that they may be too late.

Some of the gaps are filled in as to who the Monkey King is and what he’s up to. 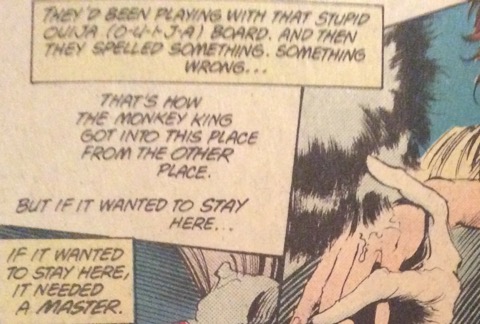 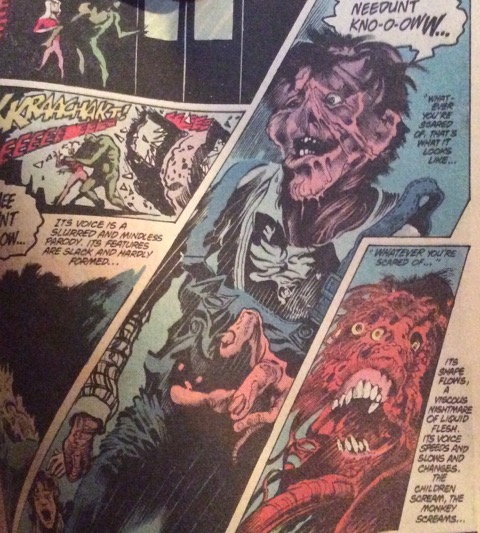 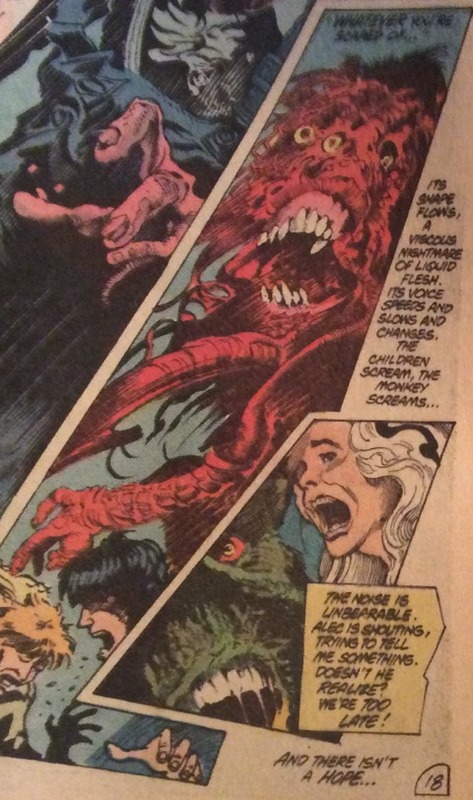 This panel depicts my favorite scream. Here, more than any other comic, Abby has always stood out as authentically terrified. 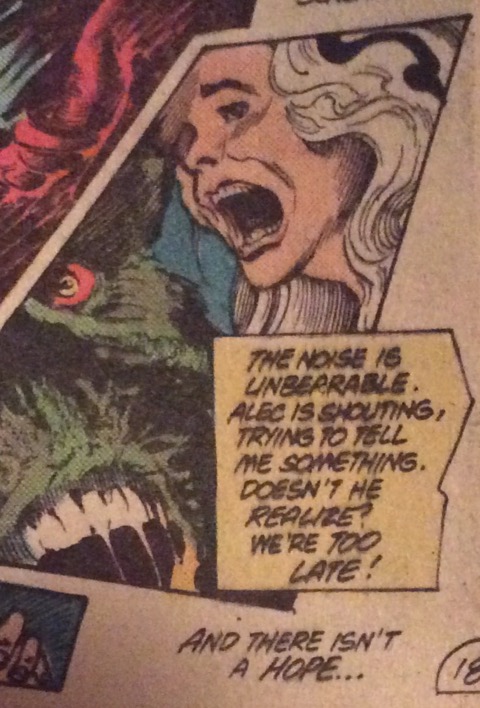 Seeing all sorts of terrible monsters, Abby goes from scared to even more so as Etrigan rips a hole in the roof and descends upon the scene.

As someone who fell in love with Swamp Thing through the Moore years, these early Moore issues really strike a chord. I remember reading SwampThing 21 Anatomy Lesson and being rocked by the story. Reading on, it didn’t take many issues to be blown away by the artwork, like the splash page below. In so few books, the creative team delivers hit after hit of exciting content. 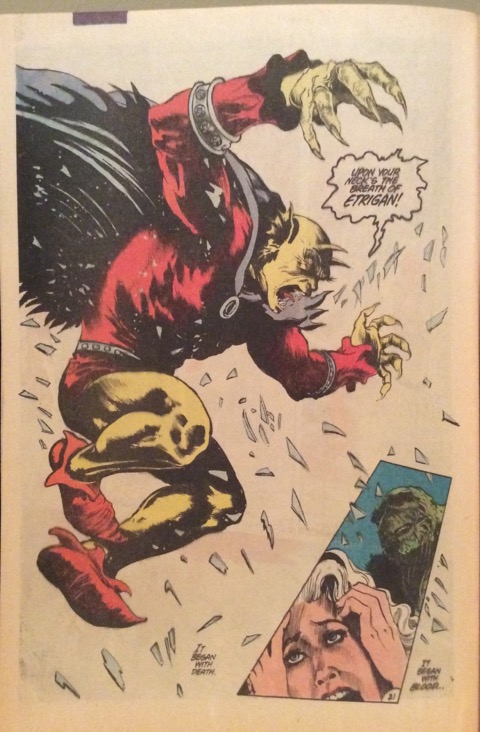 As for the situation at Elysium Fields, we are left with a cliffhanger. Etrigan the Demon is on the scene and Swamp Thing looks kind of pleased about it.

Matt Cable continues to drink. He gets the idea to follow Abby, to help her.

A terrible idea, Matt’s car goes off the road and explodes after hitting a tree. I’ve always found the Burma Shave billboard to be quite humorous in the final panel.

To recap; everyone is in a tight spot. Except for Matt Cable, he’s dead.

Ads:
this self-promoting ad says that “everyone’s talking about” Swamp Thing. Well, they are. The letters page is buzzing! 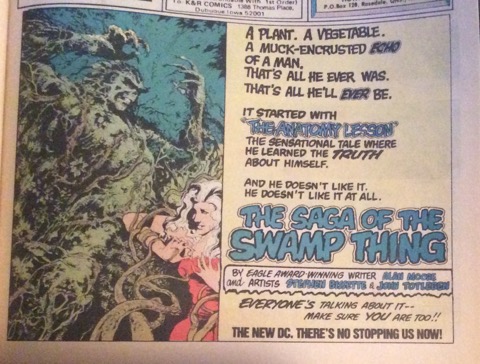