The new Constantine series chugs along with issue two and unfortunately, not much has changed since the first book. Like many comics nowadays, it’ll probably take 5+ issues before the plot gets any legs. Re-reading Moore’s run, in tandem with the new comics I get on Wednesdays has become a bit aggravating. New books with extremely slow story telling has made it difficult to stay onboard a title. I appreciate following single, monthly issues rather that reading trades but so many books have me feeling like I’m wasting my time and money. I know Moore is an exception and is low hanging fruit to use in a comparison, but he was able to craft an exciting story within a single issue. Even if the goal/plot wasn’t resolved in a single issue, Moore established enough intrigue and character dynamics to make each issue feel whole. Alas, the world keeps spinning and I’ll keep picking up the Swamp Thing appearances as they come out.

The previous generalization aside, I’m excited to see where this story goes. I’m enjoying Moritat’s artwork and Oliver has introduced a few great characters from Constantine’s past.

Cover by Moritat.
I can’t figure out why Mercury is on a motorcycle. This isn’t something that occurs in the book and if Mercury is anything like the character we saw in Jamie Delano’s Hellblazer, she doesn’t seem the type of person to ride a motorcycle. But, people change and this is only a cover… I’m sure we’ll find out as the story unravels. 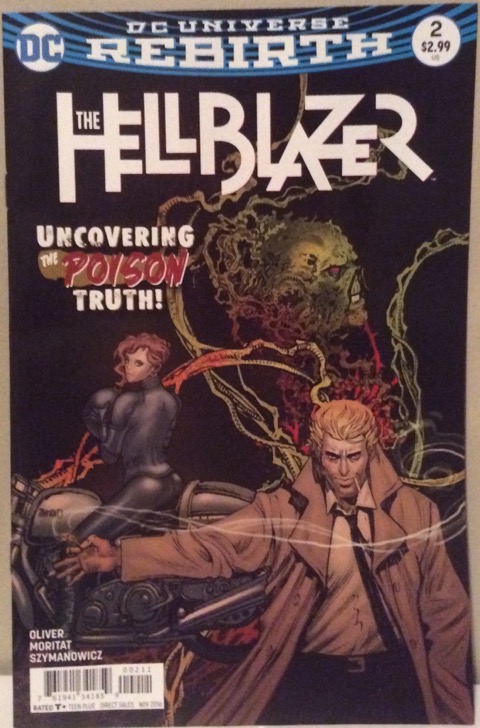 I am intrigued by a couple of the characters that have made appearances in this series so far. Mercury -an old friend of John’s- seems to be ready to help Swamp Thing. I’m enjoying their dialogue but after two issues, they are still talking where we last saw them in issue 1. 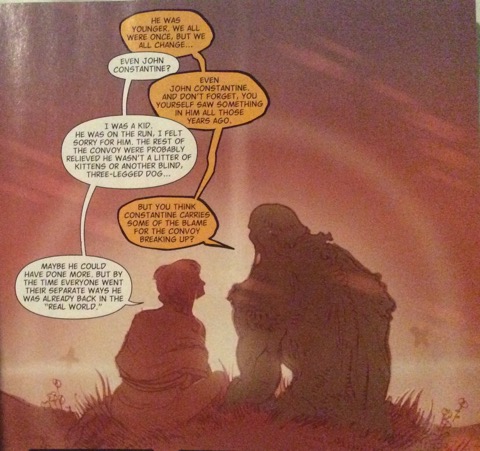 Oliver references Hellblazer 14. I thought that was really cool, as it’s Mercury’s first encounter with John. I believe, it’s also the first time anyone had seen John’s Swamp Thing tattoo.

Moritat draws a pretty great Swamp Thing. Rather than looking leafy, Moritat makes Swampy appear rough and solid; a nice contrast with the genial conversation he has with Mercury.

So far, the story is broken down into 3 strands; Mercury helping Swamp Thing, Constantine’s seemingly solo endeavor and whatever the heck Marid (who was a conspirator in the Ferdinand assassination) is up to. Based on Marid’s long history, his mucking about behind the scenes, and Swampy’s desire to get Abby back from the Rot, I’m going to assume some sort of demonic presence is on the horizon.

John has a moment on the loo while reading the paper. 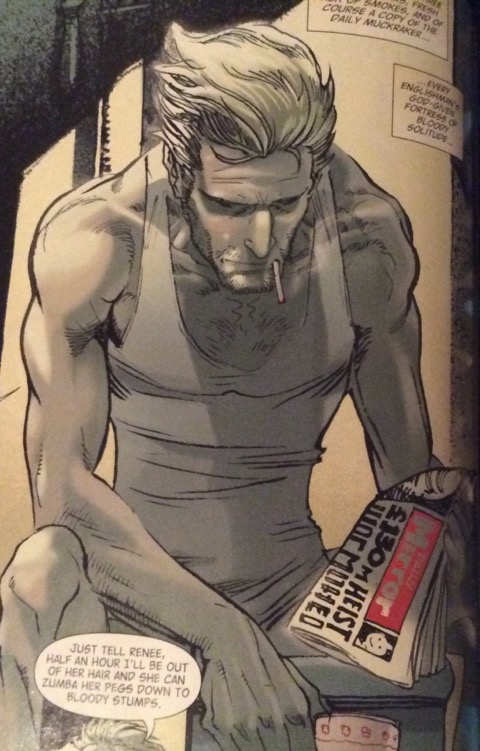 Although still not sure what John is cooking-up, the £130 million heist (noted on the paper he is reading) along with his desire to have Chaz bet a large sum of money at the tracks can’t be a coincidence. 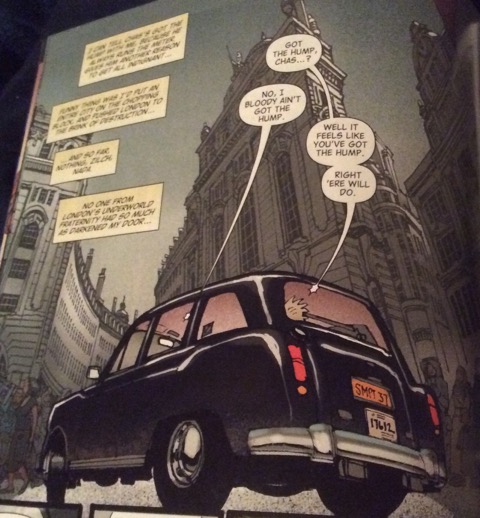 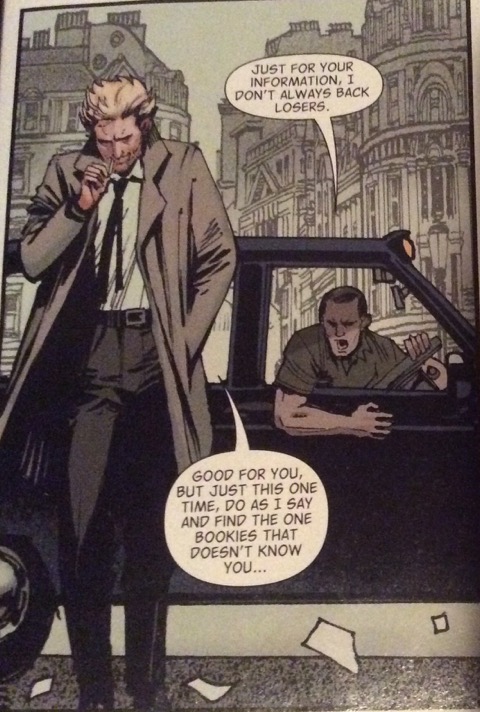 Constantine, like always, is conning his way through his juggling act. He’s trying to help Swamp Thing, save his own ass and I’m sure he’s got a number of motives up his sleeve. John usually comes with ulterior motives and a back-up plan.

he meets with his old flame, Clarice. Clarice is looking considerably younger than usual. 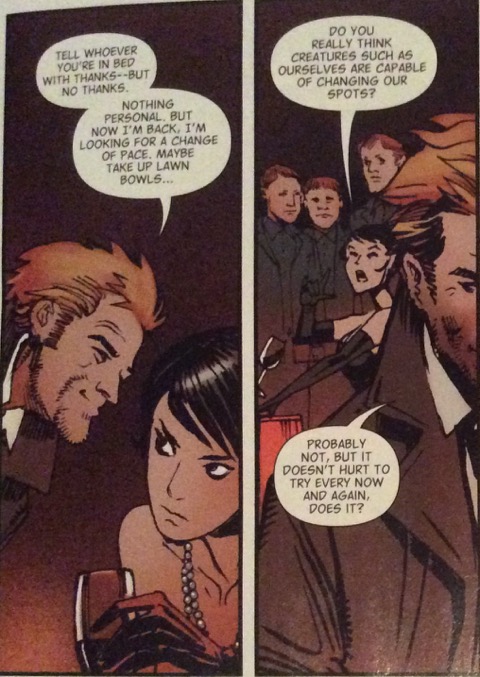 This panel may explain her youth. It looks like she’s had a whole lot of plastic surgery, lifts and tucks. Notice the panel above. Clarice has bony, old looking hands.

Unbeknownst to Constantine, Clarice is in cahoots with Marid (from the Ferdinand assassination). It’s not clear what they’ve got planned but it’s sure to be wicked.

While on the run from a pair of unfamiliar thugs, Oliver drops in a little nod to Sting and the Police. Although he is looking back toward his pursuers, Constantine almost seems to break the forth wall, acknowledging the joke. 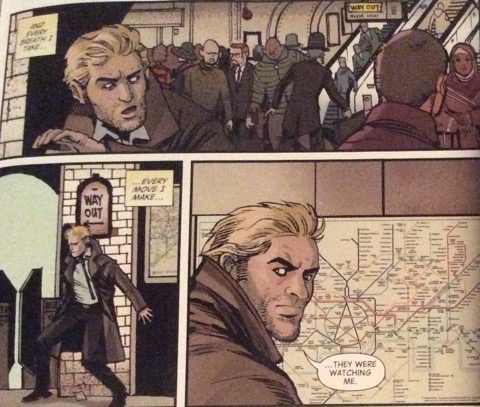 I’m pleased with the series so far but as I mentioned above, it would be nice if the story moved quicker. The first and second issue could have been spun into a single issue based on what has transpired so far. I’m interested in hearing what other Hellblazer fans think of this Rebirth series so far. Comment below or email me what you think.