The characters are all there, with plot elements that are intriguing enough, so why does this Hellblazer series continue to drag its seemingly tired feet? If you’ve been keeping up with the series, you’re aware that very little has occurred since issue 1. The series seems to be better suited for the Rebirth bimonthly format but has been spinning its wheels for more than four months. This lack of plot progression has been echoed in numerous DC Rebirth titles and as a result, I’ve been dropping books from my pull-list for the past two months. The Hellblazer series, along with other Rebirth titles, contains endearing and intriguing characters and concepts but as I spend my money on books each week that I hope to find entertaining and fun, I’ve begun to look elsewhere. I recently read a review of the Hellblazer series where the author stated, “If you’re not on board with it already, now is the time to start.” Issue 5 probably is a good point to start reading the series. Issues 1-4 could have been condensed into two comics and this final panel of issue 4 actually holds some hope for development.

As much as anyone else, I’m put off by comic book fans who feel entitled, getting on their soap box every chance they can, telling folks everything that is wrong with comics and comic related entertainment. The creative teams working on these books are professionals with a skill set that very few have. The art of storytelling is difficult and should be commended. My frustration with a number of the DC titles at the moment simply comes from the perspective of a consumer who would like to feel that I’m getting my monies worth. Although frustrated, I’m not convinced the creative teams working on these titles are pulling the strings on that end of the business plan.

The Hellblazer 4 was released this week. I held off on writing about issue 3 last month so I could roll it in with issue 4 and it’s cool variant cover. Between the two issues the new, whimsical variant cover by Yasmine Putri is the most exciting part. 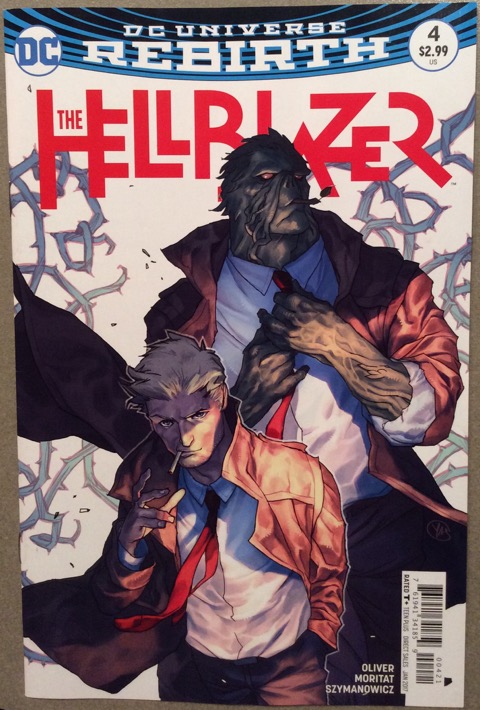 Swampy plays it safe by sucking on a twig. 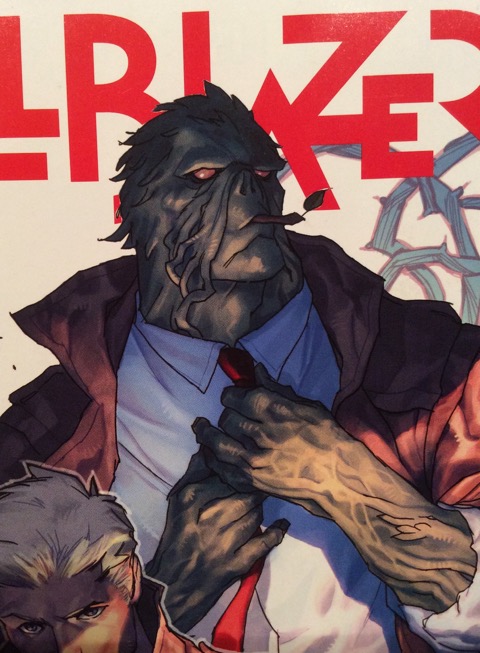 Everyone goes crazy for a sharp dressed muck-monster.

The standard cover of issue 4 also features Swamp Thing, along with a fiery caricature of  Constantine by John Cassaday. 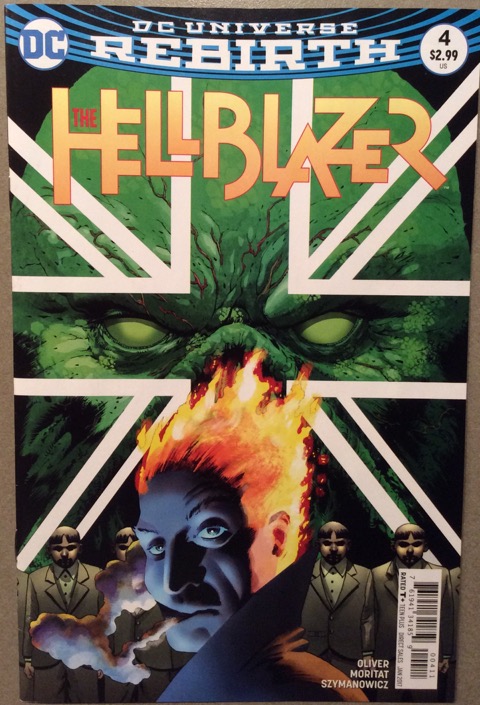 Quickly summarizing both issues, 3 and 4: Swamp Thing and Mercury are still scraping the surface in finding where Abby Arcane has gone within the Rot. Her lack of presence and communication is still a concern.

Swamp Thing briefly battles the Rot from within. He does not die but loses quite a bit of strength. Moritat depicts Swamp Thing’s ravaged body as having a human skeleton at its core. Depending on which continuity this is drawing from, skeletal remains of Alec Holland have not been a part of Swamp Thing for a very long time.

Meanwhile, that horse race that Constantine had Chas put a large sum of money on worked out in their favor, and surprise, it lands them both in hot water. Constantine summons an evil Genie allowing him to slip away from his captors, in typical fashion.

Back at the Tate Club, Clarice is still dealing with Marid who’s grown increasingly violent. He wants Constantine, Swamp Thing wants Abby and in typical fashion, Constantine wants to save his own ass.

I’m interested to hear your thoughts on this series along with other Rebirth books you’ve been reading. Let me know what you think in the comments section below.