As I’ve said in the past -big or small- I enjoy stumbling upon articles and information that act as the connective tissue within the world of Swampy. This info helps to piece together the history and timeline of our favorite muck monster. The British superhero magazine, Fantazia offers up a small glimpse into the production of the two Swamp Thing TV series.

It’s 1990 and the USA Network is developing the Swamp Thing live action TV series. The blurb mentions that the show intends to be a comedy and Dick Durock is not in the running to return in “leafy greens”. As we’d eventually learn, Durock plays the role of Swamp Thing and the show acted more as a dramatic action series rather than a comedy. The show never quite ventured into the realm of comedy but many laughs can be had at the expensive of the production value and acting quality throughout the show’s run. 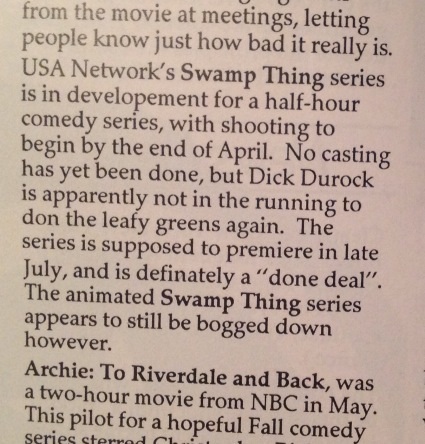 The blurb also mentions the animated series. Although the show appeared to be “bogged down” in 1990, it made its debut in April of the next year. The show only lasted five episodes. The live action series debuted July 27, 1990 and lasted for 72 episodes.