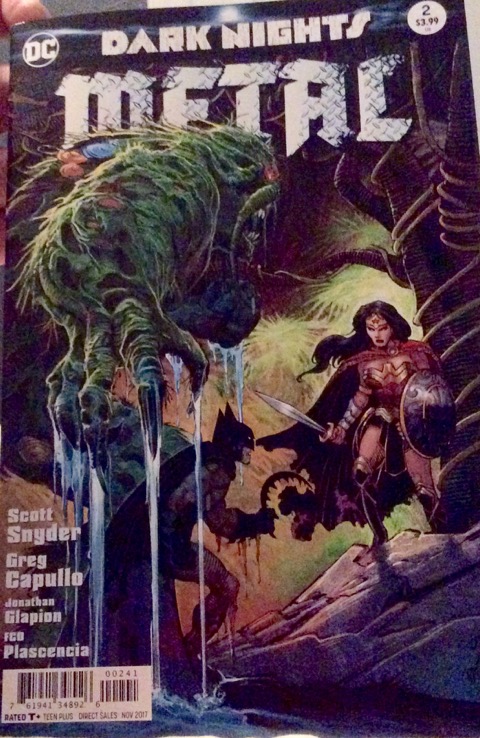 Like most of Swampy’s recent appearances, this one is fleeting and seemingly random, but very cool! JR Jr even drew a variant cover featuring Swamp Thing (above).

The Parliament of Trees was referenced in the prelude to Dark Nights: Metal and we didn’t have to wait long to see Swamp Thing within this, issue 2!

For those unfamiliar with the Metal series, Batman is in search of a powerful, ancient, other-worldly metal substance and he’s found himself in a, ‘damned if you do, damned if you don’t’ scenario. The planet is at risk and all hands are on deck. Some DCU Heroes aim to stop Batman from finding the metal that could destroy mankind and who knows what else. Those allied with Batman are doing all they can to assist him in finding the metal, to destroy what lies behind it. It’s a little convoluted but I’m on board and am enjoying the series so far.

Batman is being tracked by the JLA within the Amazon Rainforest.
Sound familiar? That’s right, it’s home to the Parliament of Trees! It appears, Batman and his crew of helpers have lured the JLA into the Amazon and they’re in for a surprise!

prepare for “the terrible Green beat-down”! 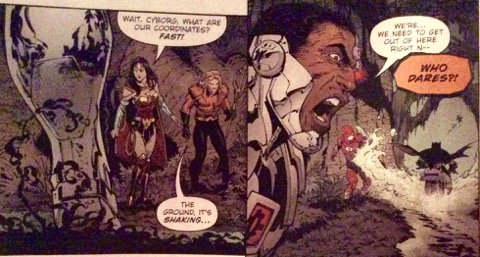 “Who dares harm The Green here?! At the Parliament of Trees?!”

Sorry to tease but I’m going to stop right there as to not ruin any more Metal surprises. Seeing Swamp Thing was a blast but there’s plenty more in store for you!