This issue of Speakeasy (the UK Comics Magazine) was brought to my attention by Ilke Hincer, the research guru behind George Perez’s website george-perez.net. When he comes across an obscure Swamp Thing related item he sends the info my way and I try to track it down. It’s an amazing back-n-forth and I always appreciate his leads.

The ad appears toward the front of the book and highlights Swamp Thing – volume 8 of Titan’s Swamp Thing tpb set. The Titan set is made up of 11 books, collecting Swamp Thing #21-64 and includes Annual #2. The black and white, softcover trades can be found online easily and look amazing. I’m always thankful for non-US editions that are printed in black and white. The artwork tends to pop much more and it’s easier to appreciate the detailed inks.

I got Speakeasy 91 for the ad but equally thrilled to read the Black Orchid interview with Neil Gaiman. He mentions Swamp Thing a couple times! 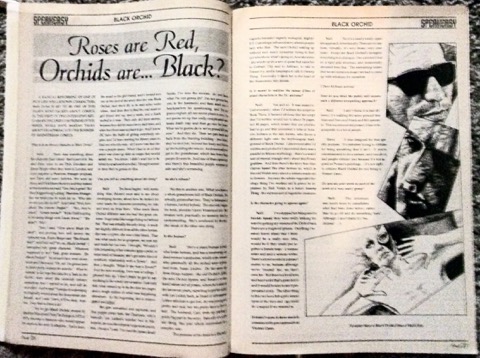 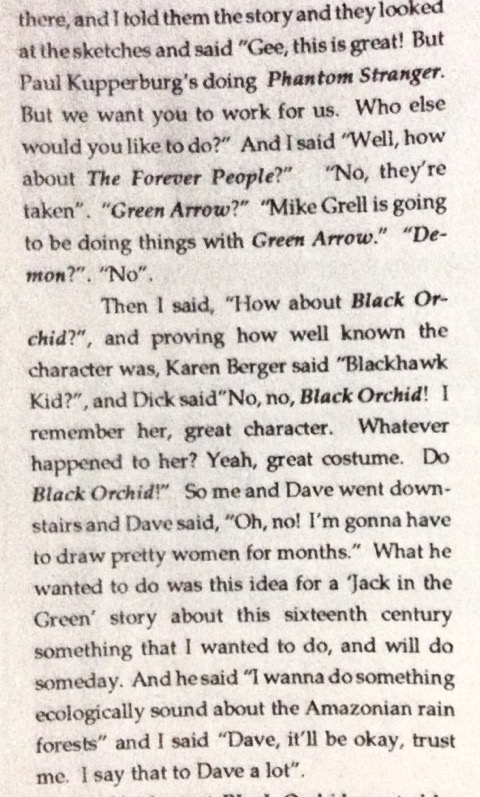 Gaiman mentions that Orchid’s travels take her down to Louisiana to see Swamp Thing. As you know, this is just the tip of the iceberg for the cool interactions and appearances Swampy has within the series.

Gaiman mentions Veitch’s plans to incorporate his plant mythology into the Swampy continuity. We later saw Gaiman’s plant mythology develop within, Midnight Days: “Jack-in-the-Green”, Books of Magic, and The Children’s Crusade. I spoke with fellow Swamp fanatic and friend, Rich Handley about this interview and he provided the following insight, “he (Gaiman) and Jamie Delano were going to use it as the template for their tenure on Swamp Thing before they decided not to become the next writers. This is the first I’m hearing of Veitch being involved. Given that Veitch had only been scheduled to be on the title until issue 90 anyway, my guess is that Gaiman said Veitch but meant to say Delano.” Rich always comes through with the thorough ST info.

“He looked for what made the character interesting for him and went on from there” Neil Gaiman talking about Alan Moore’s advice on revamping heroes.

Neil Gaiman recounts his need to establish a strong origin story for Black Orchid: “I had to… come up with an origin… I didn’t want her to be bitten by a radioactive orchid.”

The icing on the cake in this Speakeasy 91 is the Dave Stevens interview. I’ve been a Rocketeer fan since I was a kid. I love the costume and pulp-like adventures. I usually stumble upon Stevens/Rocketeer articles/art because Stevens was getting a lot of attention around the time Alan Moore was working on Swamp Thing. Most comics magazines, where you’d find interviews or articles relating to Swamp Thing around this time, would typically have some blurb about the Rocketeer as well.