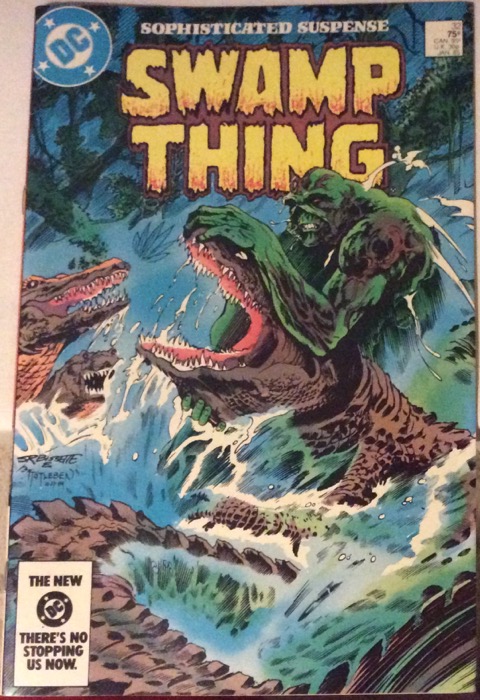 After the intensity of the Swamp Thing Annual #2, Moore and the story-arc tapped the breaks for a couple issues (ST 32 & 33). It’s been said that Bissette and Totleben had been falling behind on the series schedule; due to the extensive craft & detail they’d put into each book, and perhaps other professional commitments. But, it’s also not abnormal for a few filler issues between story arcs.
Editor, Karen Berger confirms this within the letters page. 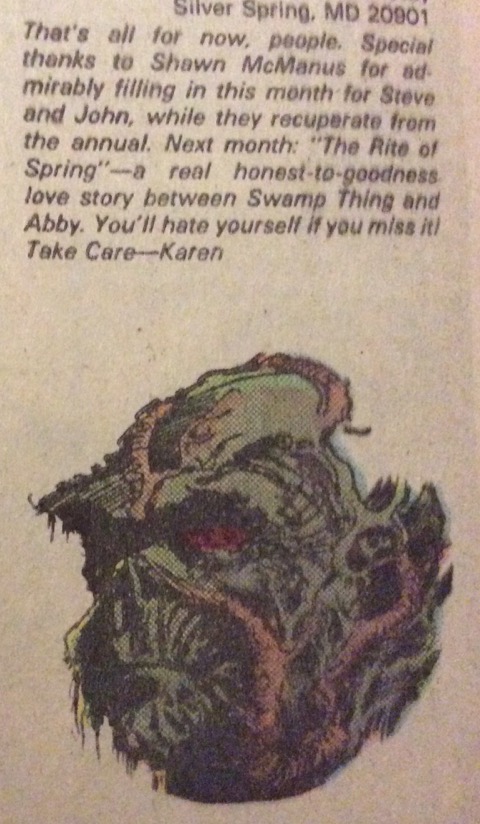 This issue was illustrated by Shawn McManus while Bissette and Totleben took care of the cover. 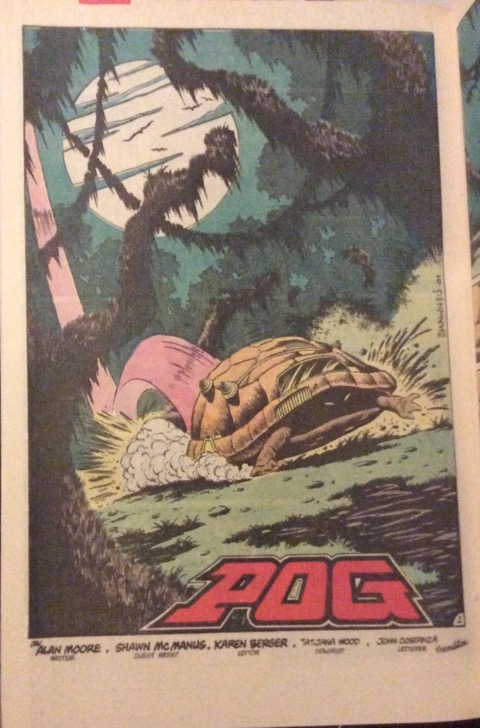 Moore creates a seemingly cute, whimsical scenario focused on a group of small space travelers who’ve been on a tireless journey to find a new “Lady” (home planet/Mother Earth). The scenario-and their new familiar looking Lady (Earth)-is not what it seems and what once felt like salvation becomes a nightmare.

The terrain seems to be suitable. The little alien crew members are restless and eager to explore what looks like an ideal environment.

It’s interesting and fun to read this issue after the barrage of chaos that occurred in the preceding Swamp Thing Annual, and issues following up to. It’d be justifiable if confused as if you’d missed an issue after Abby returned home. Swamp Thing was able to escape Hell but he’s being detained by… cute little alien creatures.

Initially, Moore’s use of Walt Kelley’s Pogo-like characters seems as random as it gets. But, Moore crafts an amazing, tender homage through the little, nature-loving creatures.

Swamp Thing and the alien, Pog are kindred spirits. Words do not need to define yearning for a sense of home or belonging; something Swamp Thing will forever struggle with. Throughout the story, Moore brilliantly reverses the translation talk bubbles. We now know what the aliens are saying and Moore has given us such a world that we understand what Swamp Thing is conveying.

Much of the story is a byproduct of the terrible realization that Earth is no home at all for the Pog and his crew. Earth is brutal like the Lady they left behind. The crudity of the humans is much like the primates they fled from. Through this seemingly brutal landscape, Moore depicts inescapable cruelty as well as environmental issues; man’s impact on the environment.

After Swamp Thing establishes an understanding of Pog’s mission, he feels it necessary to introduce Pog to the dominant species on Earth. Pog gains perspective of where he and his crew have landed. Meanwhile, Bartle goes for a swim in the swamp…

In unison, the aliens realize the dangers that inhabit Earth.

There are some wonderful parallels between Pog and Swampy throughout the story. It’s fun to see Swamp Thing react to the same misunderstanding and fear that he felt when he became the monster. It makes you wonder; Pog reacts to humans as disgusting tyrants, Swamp Thing must feel like he’s on the right side of the fence for once.

Swamp Thing and Pog return to the swamp but it’s too late. Earth’s pecking order has a deadly learning curve.

Yet again, Pog and his crew attempted to find a new Lady but were met with despair and loss. Much like Sam Beckett in Quantum leap, Pog hopes that his next leap… will be the leap home. 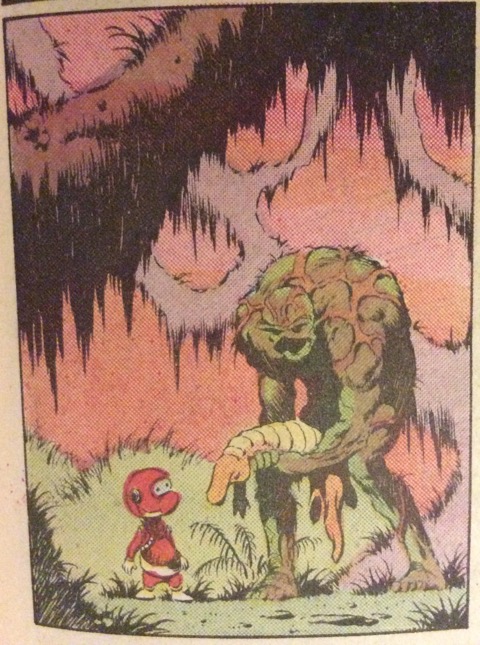 Bartle is laid to rest and the sad little aliens have seen enough of our planet.

Much like Swamp Thing 9 (series 1) “The Stalker From Beyond”; in a short amount of time, Swamp Thing befriends an alien and then sees it off. In both instances the aliens find Earth to be intolerant and uninhabitable, escaping with the hopes of something better.

The sullen aliens board their ship and Pog says farewell to Swamp Thing. Thankfully, in this issue the alien spacecraft does not explode in the atmosphere like in ST #9. 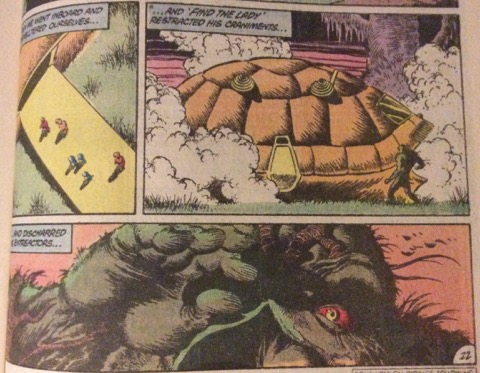 Letters Page:
This issue features a letters page! The ST books that were published since Moore took the reigns lacked a regular letters page. I’m guessing DC wanted to wait for some fan letters to roll in before publishing them.
The reviews are rolling in and fans are excited! 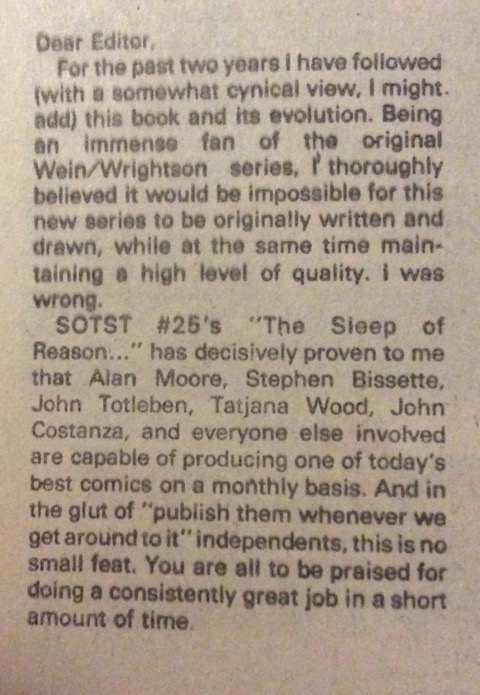 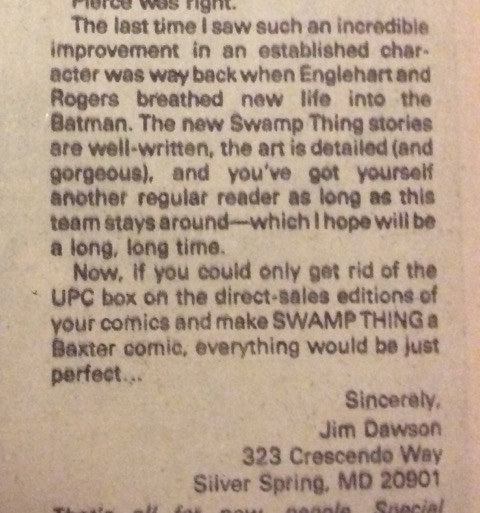