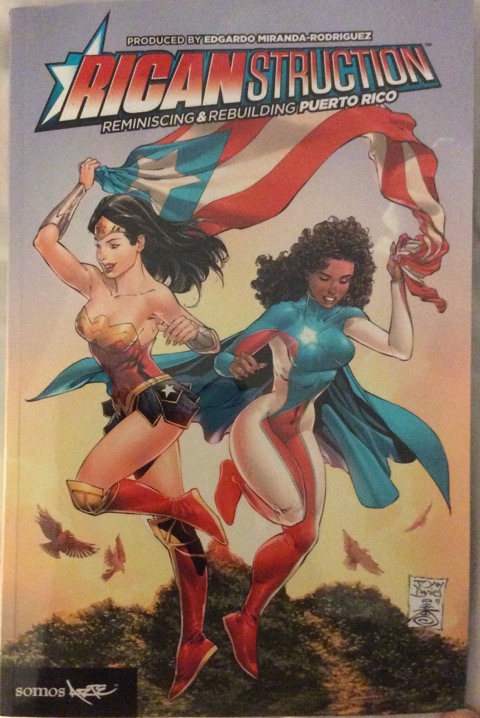 This beautiful comic anthology is filled with heart warming stories of team-work and perseverance, from Puerto Rico’s past and toward its future in recovery. Comic book author Edgardo Miranda-Rodriguez spearheaded the anthology to help the ongoing recovery and humanitarian efforts. All proceeds benefit Puerto Rico’s rebuilding process.

Throughout the book, La Borinqueña (the featured character from Miranda-Rodriguez) teams-up with a ton of DC Superheroes to save the island of Puerto Rico after being devastated by hurricane Maria. Miranda-Rodriquez has said, “La Borinqueña was created to raise awareness of the effects of climate change and how it would affect Puerto Rico and the Caribbean.”
This thick anthology is filled with beautiful artwork and stories and includes stars such as comic author Gabby Rivera, actress Rosario Dawson, novelist Esmerelda Santiago, and MANY more. You won’t want to miss getting a copy of this!
And another little perk… Swamp Thing appears in two stories! Let’s dig in.

“Metamorphosis”
The Puerto Rican rainforest has been through a lot since hurricane Maria devastated the island’s landscape. The last thing the forest needs now is Solomon Grundy trouncing around. 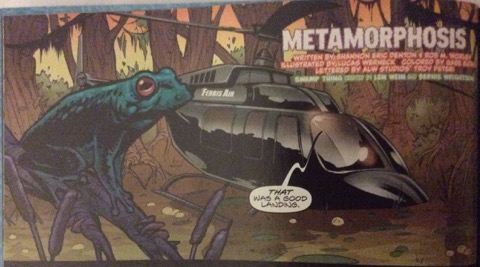 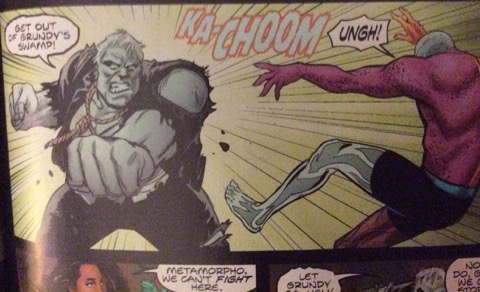 That’s where Metamorpho and La Borinqueña step in! La Borinqueña reminds Metamorpho that in battling Grundy, the fragile eco-system needs to be protected. The frogs-indigenous to only the Puerto Rican rainforest-are the source of vital medicine. Grundy must be contained while keeping the surrounding environment protected. This calls for a little ingenuity. 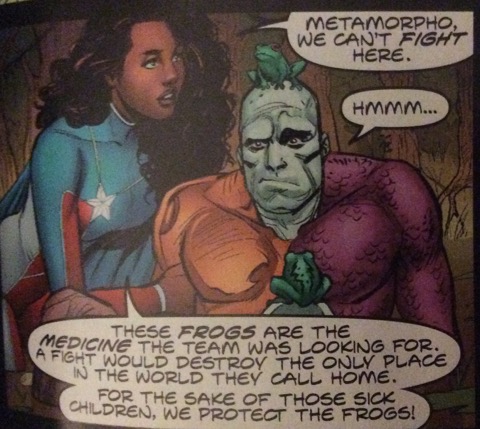 Metamorpho calls on a friend to help detain Grundy… and it’s Swamp Thing!

Swamp Thing takes Grundy into custody and finds him a safe spot where he can play with all the frogs he desires, and not cause as much destruction. 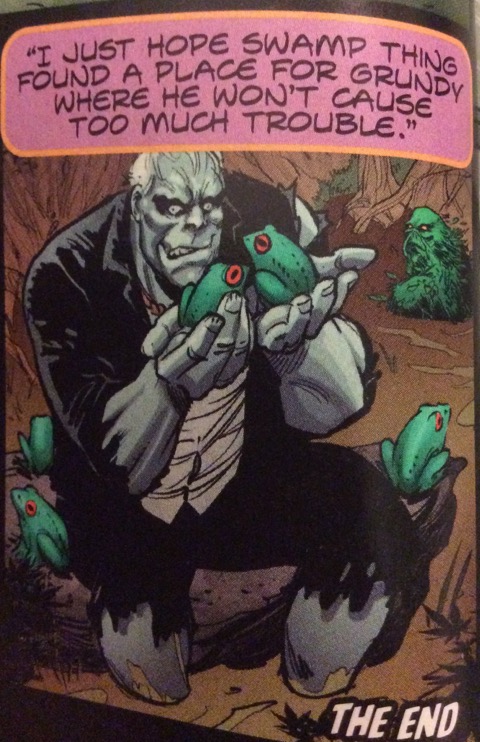 “Verde Luz”-translated in English to, Green Light-is the second story within Ricanstruction to feature Swamp Thing. In this four-page short, Swamp Thing and La Borinqueña team-up to help the Puerto Rican rainforest grow back to its natural lush state. It’s a quickly moving, poetic story that seems to end before it gets started but the simplicity of it all is wonderful! I encourage you to ask your local comic shop to carry the anthology or order one online. Puerto Rico needs the help it deserves and it’s a shame more hasn’t been done already. To order your copy of Ricanstruction, visit www.la-borinquena.com 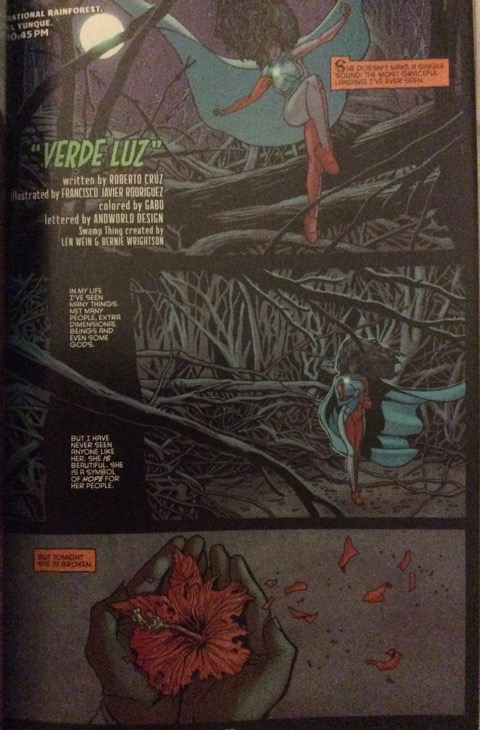 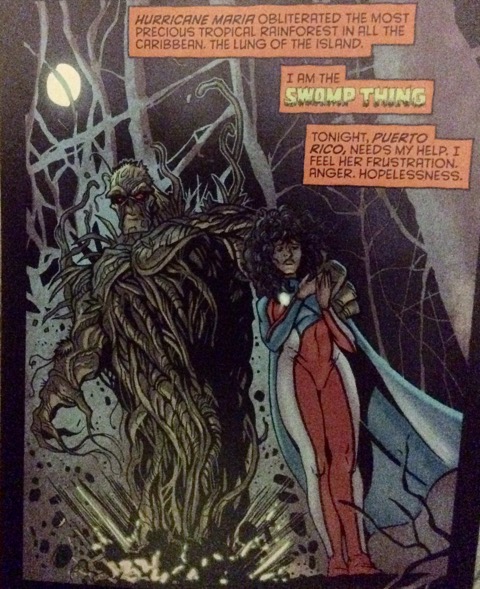 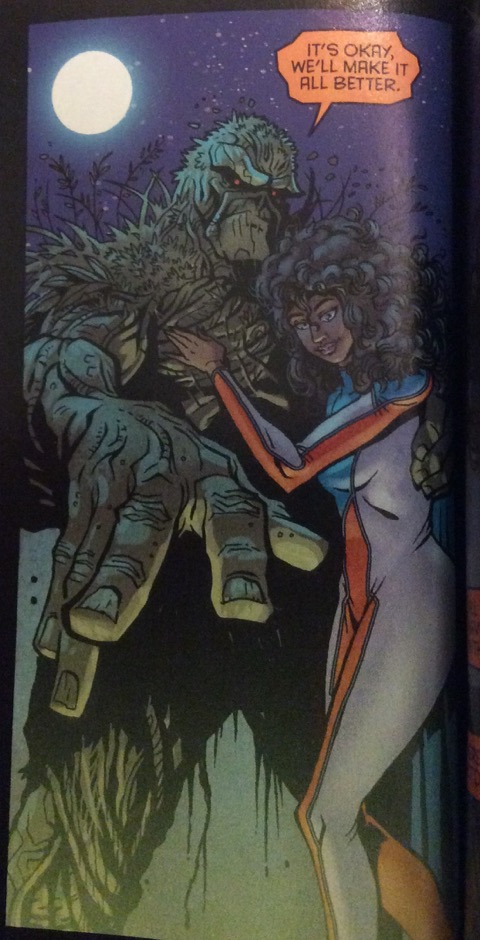 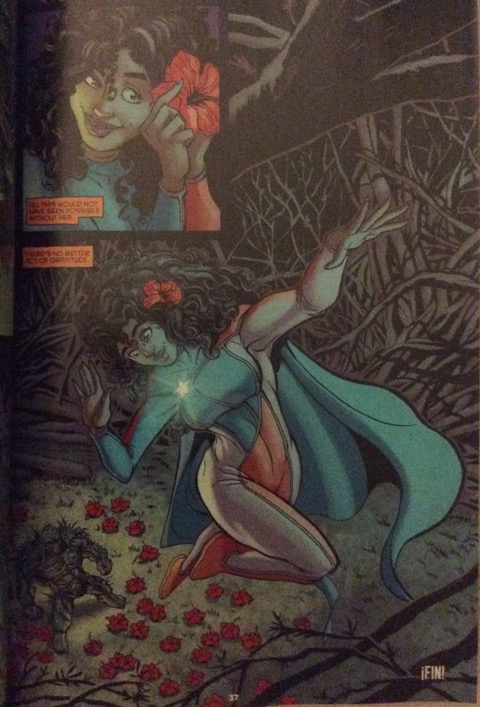