If you’ve not seen episode 2 of the new Swamp Thing series, you may be disappointed to find that the following contains various spoilers.

DC Universe’s Swamp Thing, episode 2 was released last Friday (6/7) and it was even more fun than episode 1. Although the episodes were cut from 13 to 10 and recently held to just 1 season, it’s ramping up to be one of the most exciting comic related shows at the moment. It doesn’t adhere to the continuity of the comics but it has involved exciting choices in how the characters are portrayed.

There’s quite a bit of eye candy throughout the episode but three scenes captivated me the most: the first being Swamp Thing’s connection to Susie Coyle.

The writers establish a strong connection between the newly created Swamp Thing and Marias native, Susie (one of the townspeople infected by the bio accelerant formula). As if psychically linked, young Susie feels Swamp Thing’s emotions. She senses Alec’s fear and confusion as he helplessly trudges through the swamp. Later in the episode, Swamp Thing is also able to sense the danger Suzie encounters while in the swamp. He’s able to quickly find the child through their connection and their bond to nature.

The powerful link they share aids in establishing Swamp Thing’s powers. Most importantly, their bond introduces the symbiosis between plant and human. 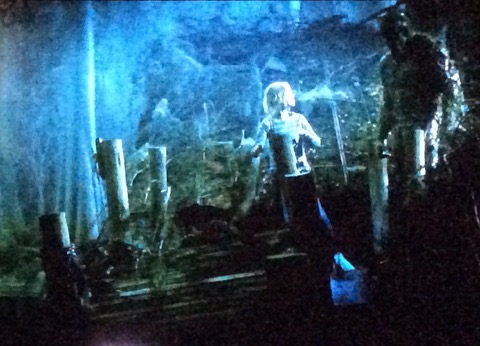 The second moment in the episode that brought me great joy was seeing Jason Woodrue! 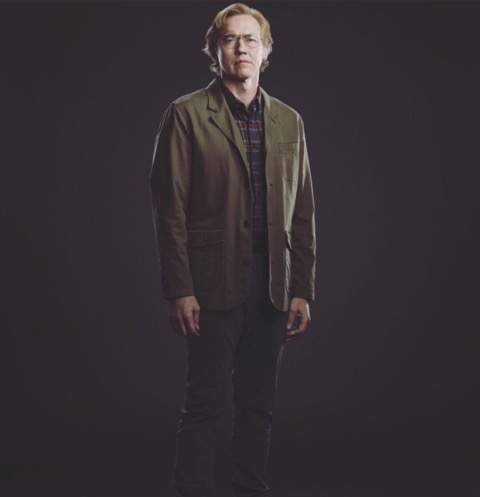 Feeling the heat from the CDC, Marais townspeople and local authorities, Avery Sunderland calls upon his science mastermind. At 29:21, Jason & Caroline Woodrue enter the scene. The two are doctors and appear to be professional partners. They’ve arrived in Marias to address the outbreak caused by Jason’s bio accelerant.

Before meeting Sunderland, Jason diverts his attention to tend to a Japanese elm suffering from transplant shock. He’s captivated by nature and his surroundings more than the problems that plague humanity. At one point, Woodrue grits his teeth in disdain, creating an intensity that shines off the screen. It got me in the mood to pickup some old Floronic Man appearances!

While talking to Avery, Woodrue displays contempt for his simple/one-track mind, and tone. Actor, Kevin Durand delivers a fantastic portrayal. Durand puts Woodrue’s brilliance, intensity and attitude on exhibit. This character appearance alone endears me to the series. Jason Woodrue was my highlight of the episode and is one of my favorite characters from Swamp Thing’s world.

During the brief meeting between Sunderland and the Woodrues, Avery admits to having hired Woodrue to develop a growth accelerant in order to profit from the swamp’s lucrative, natural resources. As Avery put it, “more trees to drain the water, more land to develop, more plants to develop into drugs and cosmetics and things to monetize.” Woodrue denies that his accelerant could have anything to do with the outbreak of sickness in Marais.

During his 3:56 appearance we also learn that Woodrue is a professor, taking leave time to address Sunderland’s concerns. Caroline Woodrue mentions that he is only using Avery’s money to fund his personal projects/research. I hope we learn more about Woodrue’s other projects.

The third and final scene that captured my attention occurred during an epic encounter, when Swamp Thing makes his first kill.

In typical comic fashion, Swampy comes to the rescue. Susie has ventured from the Marais hospital to look for Swamp Thing, who she’s been psychically connected to. In getting to the swamp, Suzie encounters one of Sunderland’s thugs who’s been tasked with retrieving the bio accelerant drop boxes. The thug chases Suzie, looking to kill the child for what she has witnessed.

While Swamp Thing faces off against the Sunderland thug, we learn of his regenerative powers. The thug stabs Swamp Thing repeatedly. Swampy recoils in shock and pain. Within seconds the stab wounds heal, his mossy exterior grows back together. 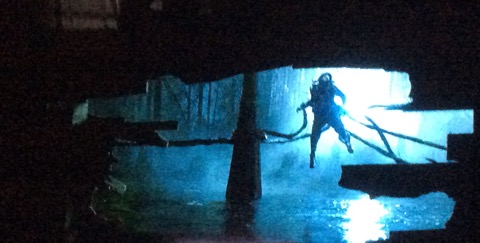 Swamp Thing controls the surrounding trees and swamp vines to ensnare the thug. The vines grab hold of his extremities and violently pull. The thug is drawn and quartered. Swamp Thing’s expression and mood shift from vengeful to disturbed after seeing the death and destruction he’s capable of. With his mossy, furrowed brow, Swampy looks almost disappointed with himself. It’s an insightful glimpse into the character and a key scene, depicting his internal struggle. Is Alec Holland coming to terms with being a monster? Does saving a life require the destruction of another? 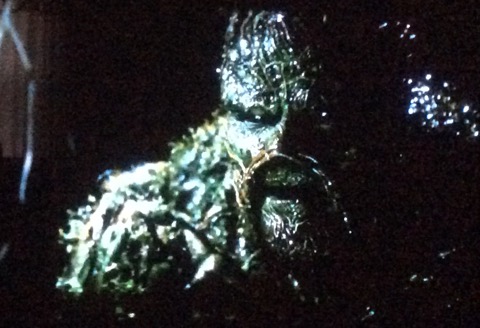 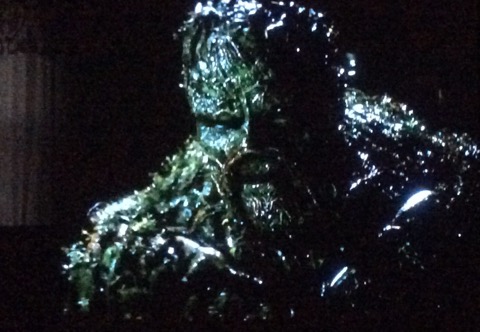 The magic of the gore is captured in his expression, reacting to the results of his brutal powers.