This “Special Double Issue” contains a giant-sized Swamp Thing (the feature film) article by Michael Kaplan. I recently bought a copy because the book was referenced in a 1982 Wooley’s Auction Gallery catalog. It’s nice to find another Swampy appearance in Cinefantastique. Articles featuring Swamp Thing can be found within issues, No 4 Vol 11, No 4 Vol 12, and I’m always on the lookout for more.

As you can imagine, this special double issue contains a ton of Conan film material. If you’re interested in the Conan content, I’m sorry. Below I’ve provide all the Swamp Thing goodness this book has to offer. I enlarged the images so you can hopefully read the article it in its entirety.

Special Effects artist (now Bigfoot researcher), Bill (William) Munns is the focus of much of the article and I was excited to dig into it. I interviewed Bill for Holland Files #1 and he expressed that he didn’t enjoy working on the film. But, he did have many memories to share. He dealt with budget cuts, unrealistic alteration requests and deadlines. These and other production troubles came to a crescendo with Munns standing in as lead villain, the Anton Arcane monster. We’ve all heard the rumors about how hard it was to work on the film. With this article, we get some insight!

I was excited to see Michael Uslan’s name in the beginning of the article. I don’t think a DC movie or tv show has been made without him being involved. I knew Uslan was a producer on the first Swamp Thing film but I didn’t know he led the second unit during filming. I’ve been trying to get an interview with him for a number of years. He’s a big Swamp Thing fan. 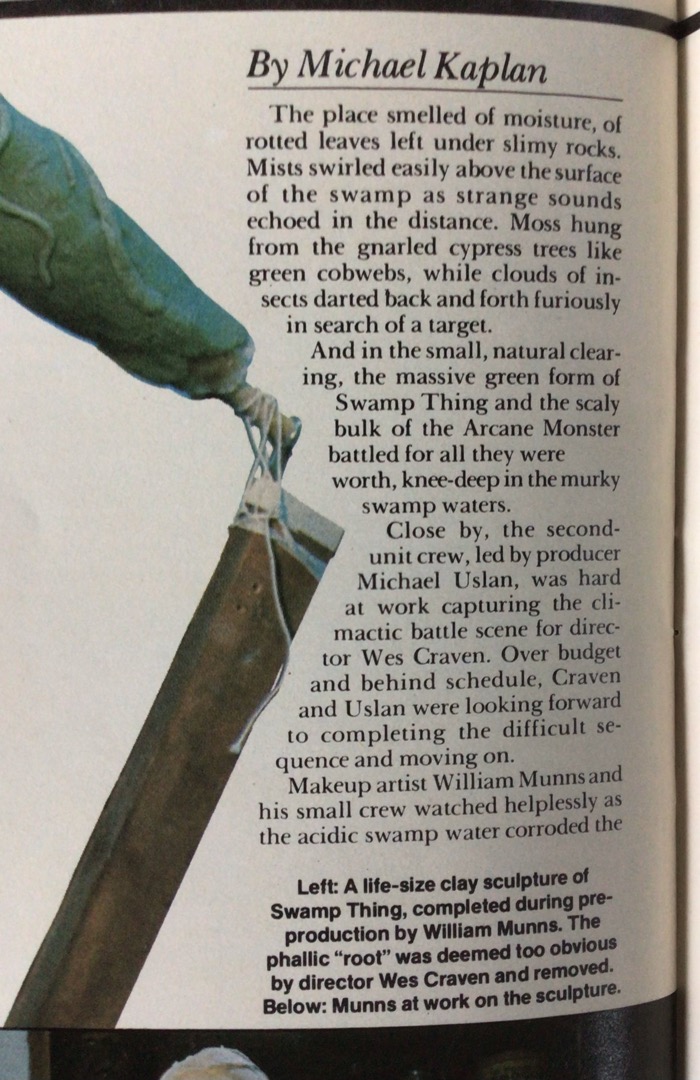 “keeping the suits in one piece had become a daily nightmare.”

Below, Munns tells of his experience having to wear the Arcane suit at the last minute of filming. The article’s author, Michael Kaplan provides a little Swampy history as well. Kaplan references Swamp Thing having first appeared in 1970. He first appeared in 1971 in House of Secrets 92.

The Swamp Thing bust is featured in the top left corner of the spread below. The bust also appeared in Wooley’s Auction Gallery catalog from 1982. Munns originally suggested to producers that the head could be animatronic but the idea was denied.

This portion of the article also discusses how stuntman legend, Bob Minor was originally intend to be Swamp Thing prior to Dick Durock.

Below, Kaplan writes that Craven originally wanted the Arcane monster to look like the werewolf from Swamp Thing #4 “Monster on the Moors.” An American Werewolf in London was also cited as an intended inspiration, which is ironic. When Bernie Wrightson saw the movie An American Werewolf in London, he thought the werewolf character was a knock-off of his original werewolf designs.

Bob Minor ended up dropping out of the picture just weeks before filming began. Dick Durock stepped into the role of Swamp Thing and Bill Munns had to figure out how to make the suit fit someone with a different frame and 3 1/2 inches taller. He and his team decided to break the suit into twelve pieces and reassemble them to fit Durock.

Below, Bernie Wrightson mentions that he was not aware of the film being made until it was almost completed. Producer Michael Uslan involved Len Wein and Joe Orlando (2 of the 3 brains that created Swamp Thing) in the writing process of the film. I suppose Wrightson had provided enough visuals within his masterful Swamp Thing comics to provide inspiration for the film. But, to not have room on the film’s creative team for one of the character’s creators is strange. Either way, someone should have let Bernie know. I appreciated Kaplan adding the vignette within his article to give Bernie more credit. 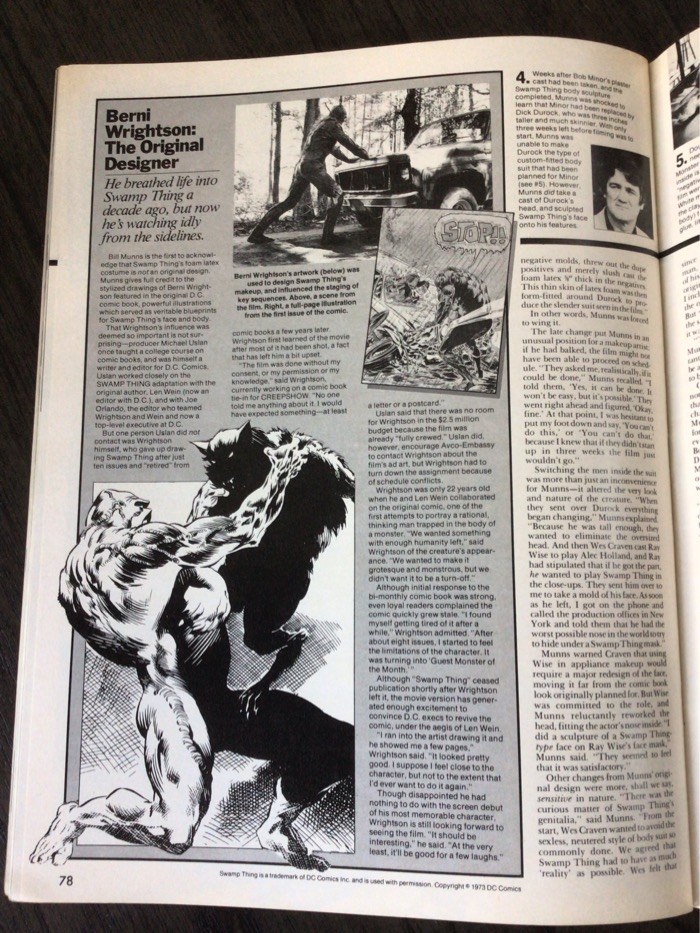 Kaplan goes on to further explain Munns’ troubles with costume fabrication. Like my interview with Bill, in this article he discusses Wes Craven’s interest in adding genitalia to Swamp Thing. The genitalia never made it into the film though. Ray Wise, who played Alec Holland, wanted to wear the Swamp Thing costume during closeups. Unfortunately Craven didn’t feel Wise and Durock looked similar enough in the muck-man costume and most of Wise’s scenes were cut. Below, Munns wears the Arcane monster suit. 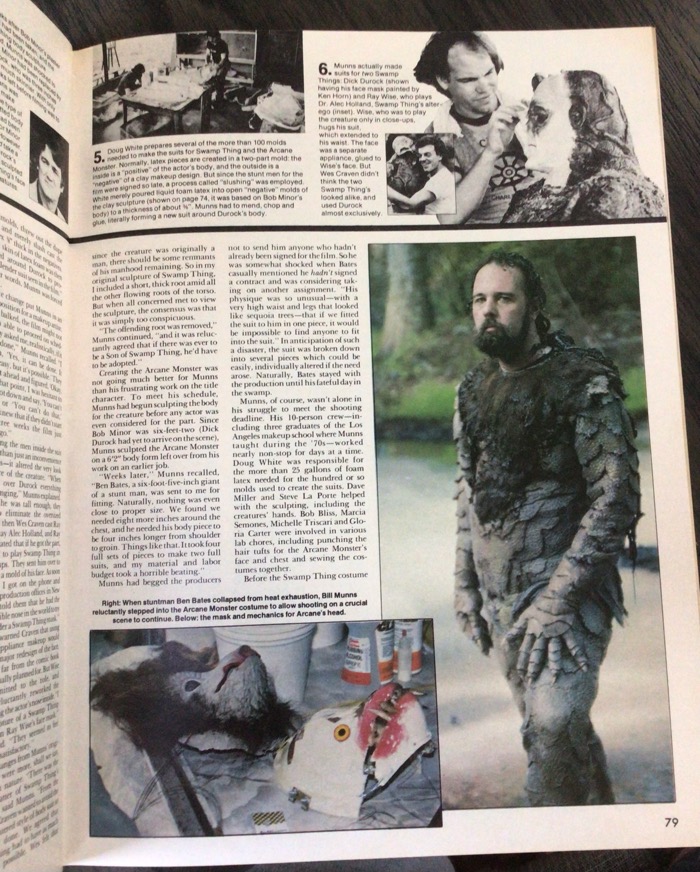 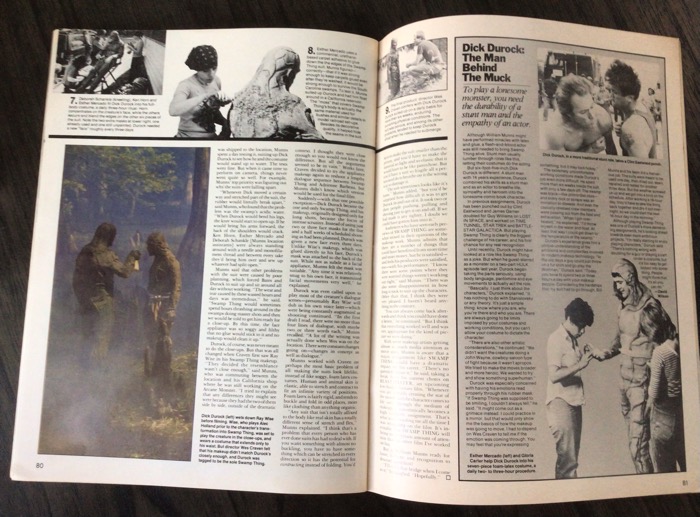 Below, it’s explained that Durock needed a new Swamp Thing mask every 3 days. Due to the conditions in the South Carolina swamps, the special effects team were on standby, constantly mending the torn Swamp Thing suit. The photo in the bottom right corner, below, is of Durock cooling Ray Wise with a spray bottle. They’re both in their Swamp Thing costumes.

The article comes to a conclusion with Munns discussing how he felt confident that he did a good job on the film. I appreciate the hell out of the movie and Munns’ work on it. I didn’t notice all the tears and flaws in the costumes until fellow Swampy fans pointed them out years after my first viewing. Also, high definition digital/home movies helped in seeing the details. Today when I watch the movie, the acting takes me out of the film more than any of the special effects. I love Bill Munns’ work on the film and am so thankful for the few, early comic book movies produced around the 70s/80s. It’s amazing that Swamp Thing was one of the characters that made it to the big screen at that time.

The Swamp Thing article is followed-up by a piece about Dick Durock. Author David Wilson gives stuntman Dick Durock a platform to speak about his process in playing Swamp Thing, along with his past film credits.