After hearing of Len’s passing last weekend, Ellison’s praise for Bernie, Len & Joe ring out. A beautiful honor to the men who opened up the world to me; not only within the books they crafted but in my day to day. I have a laundry list of reasons why their creation has improved my life. At the top of the list is my experiences with you all; being able to share my passion with fellow Swamp Thing fans from around the world.

The article was written prior to Durock assuming the role of Swamp Thing, leaving Dick without credit as playing Swampy. As most of you know, Durock replaced Ray Wise after looking much better as the title character. 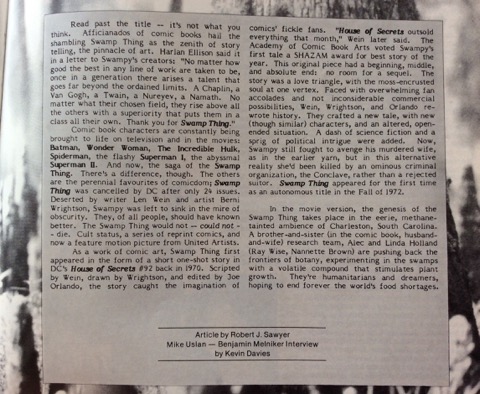 Author and publisher of Miriad, Kevin Davies provides an abbreviated yet concise history of Swamp Thing, from creation leading up to the feature film. I pulled some of my favorite quotes and insightful bits.

Davies analyzes significant differences between the comic and film adaptation.

END_OF_DOCUMENT_TOKEN_TO_BE_REPLACED

I recently purchased a lot of comic related promo newspapers; a few Comic Shop News and a couple Event papers. Unfortunately Swamp Thing doesn’t appear in any of the other papers except for this, Event 6.

The cover of this entertainment newspaper features a collage of notable comic book charters much like a Comics Buyers Guide. It’s pretty easy to spot the various, notable artist’s work throughout. I was excited to add this paper to my collection because of Bissette’s Swamp Thing in the corner. The artwork -originally appearing in ST series 2- has been used for various DC house ads in the past.

The Event was a free entertainment newspaper focused on all the action going on in Wasatch county, Utah.

Typically the paper doesn’t feature a bunch of funny book characters running wild on the cover. The cover story, “A Brief History of Comic Books” provides an overview of comic book history END_OF_DOCUMENT_TOKEN_TO_BE_REPLACED

Comic Book Comics chronicles the history of comics and in this issue, copyrights and intellectual property is the focus. 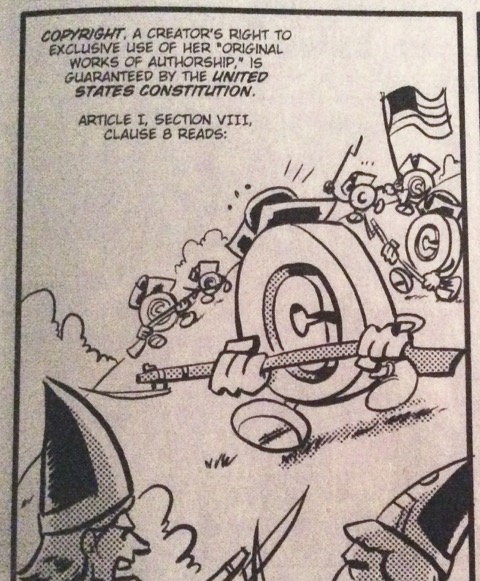 There goes the neighborhood…

the book spends some time discussing the wave of great U.K. talent that rose to prominence in the 80s and 90s., along with the hurtles they encountered with their intellectual property. END_OF_DOCUMENT_TOKEN_TO_BE_REPLACED 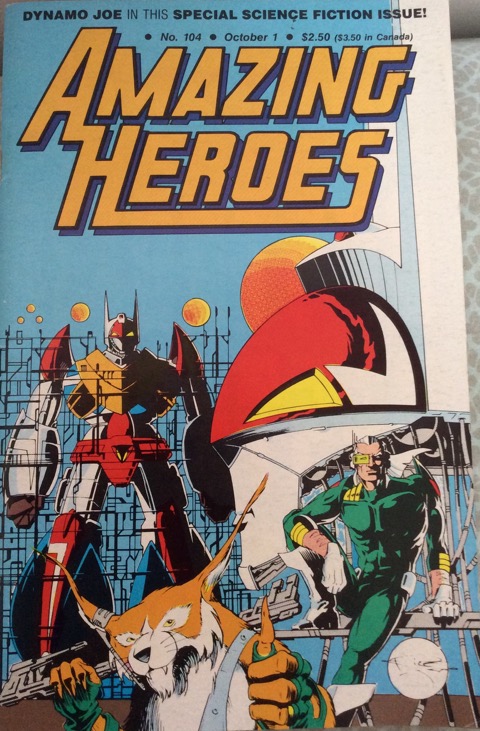 Amazing Heroes and their fan submitted art never disappoints in delivering fun parody appearances. Over the years I’ve found a number of great Swampy references and parodies within the pages of Amazing Heroes. This one may be one of my favorites… 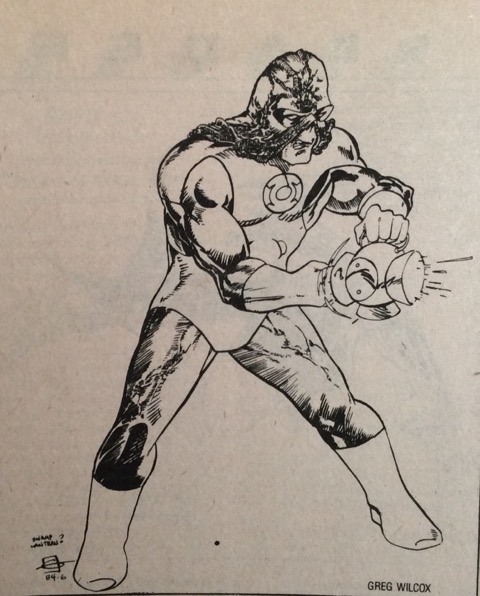 On the very last page of the book, Greg Wilcox’s Swamp Thing puts the Green in Green Lantern.

the News section also has a bit about Stephen Bissette’s plans for Swamp Thing 59.

Another key item that made me fall in love with this issue is the oversized reproduction of this Joe Orlando panel from Weird Fantasy 18 (1953). The panel appears in an article relating to great sci-if stories. Al Feldstein & Joe Orlando crafted this tale to comment on the state of bigotry and how now planet is free when shackled by oppression. It’s actually more of a subtle progression than I describe here but it’s an amazing story that I highly recommend.

The debut issue of Holland Files -the international Swamp Thing fanzine– has been popping up all around the world! A hundred more books will be shipping out this weekend and that’ll conclude the run of Holland Files #1. I’ve already started organizing a line-up for issue two and am excited to keep the Holland Files fanzine going into the future. In the meantime, thank you for your patience as your Swampy package arrives.

I heard from Casey Lau in Hong Kong (image above) and Joost Bohnen in Amsterdam (image below). They took these great photos of the book with their hometown in the background. Share your copy of Holland Files and I’ll share them with everyone here on the site.

From Stan in Tasmania!

From Bryan in Hawaii! 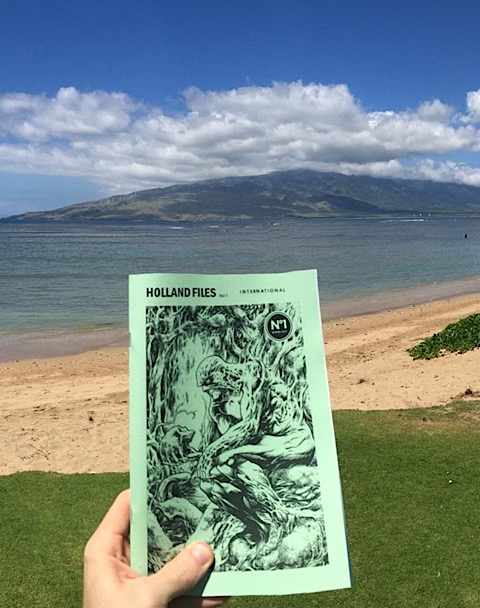 From Rodrigo in Brazil

END_OF_DOCUMENT_TOKEN_TO_BE_REPLACED 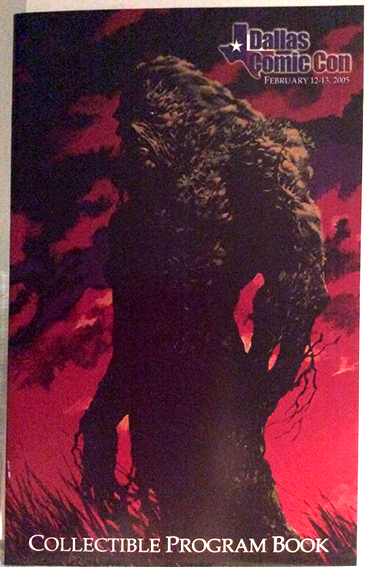 February was a crazy month and I’m extremely excited for things to get back to normal after shipping out all the Swamp Thing fanzines. I’m proud that the first issue came to fruition without too many complications and I hope you all enjoy the book. Hundreds of books have already been shipped out and hundreds more will be shipped throughout the month of March. If you pre-ordered a book, please be patient in receiving your package. 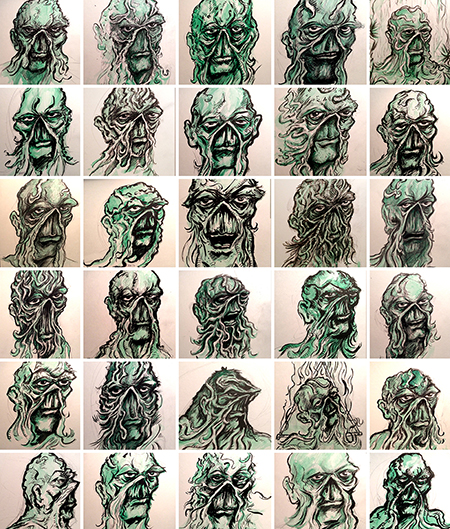 Here are 30 Swamp Thing illustrations I painted for some generous Kickstarter supporters.

Ok, back to the 2005 Dallas Comic Con program! The cover features a painting by Bernie Wrightson who was one of the featured guests that year. I apologize for the dark pictures, the program was printed that dark. Two variant pieces, similar to the program cover, are floating around online. They are more vibrant and quite stunning. 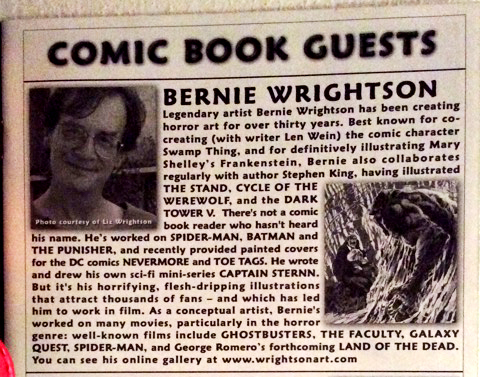 END_OF_DOCUMENT_TOKEN_TO_BE_REPLACED

My plan is to write a Swampy/Poison Ivy story but in the meantime I’m hunting down her many appearances, reading through her chronology and taking notes.
In my attempt to track down Poison Ivy’s chronology I stumbled upon a tiny Swamp Thing appearance by Tom Mandrake. Swampy fans will recall Mandrake’s time on  Swamp Thing; for about 10 issues, ranging from ’86-’92.

This book  is full of  notable villains. I came looking for Ivy, I left with a Swamp Thing collectible to add to the collection.

Swamp Thing sits in the background of Black Masks’ file. The background is a crowd made-up of various DC characters; villains and heroes.

Mandrake’s Swampy is sandwiched between Frankenstein and Batman. It’s an interesting depiction. He looks smooth and slightly phallic. 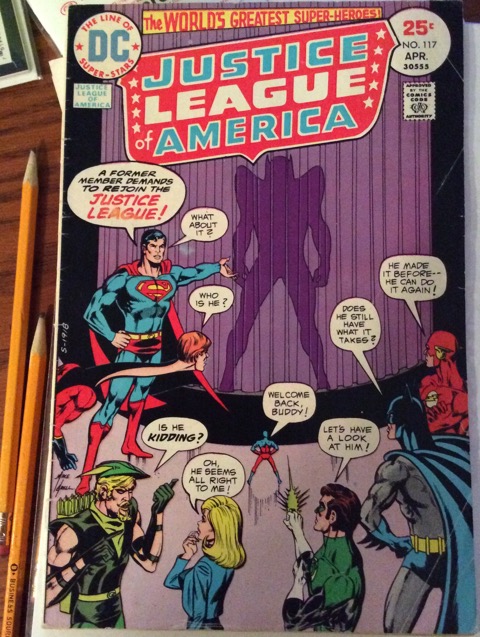 The JLA have no Swamp Thing and Thomas Adams from Medford, New Jersey is jonesing for an appearance via The JLA Mail Room.

While Mr Adams was hoping for a Swamp Thing appearance in 1975, Swamp Thing 15, The Soul-Spell of Father Bliss would have been hitting the shelves around the same time.

Before I jump into the fun weekend I had with the guys from the Underground Inc podcast, there’s still time to pre-order an issue of the Holland Files Swamp Thing fanzine. There aren’t many left but books are still available. Email me at JohnEBoylan(at)Gmail(dot)com to reserve yours today!

This weekend, Ben and Billy of Underground Inc drove up from Iowa to tour my collection and chat about Swamp Thing. Along with an interview, we recorded a commentary while watching The Return of Swamp Thing movie. We had a great time and audio audio from their visit will be available soon. Go to Underground Inc for more info.

During their visit the guys recorded a couple Facebook videos. The first is at home with my collection. 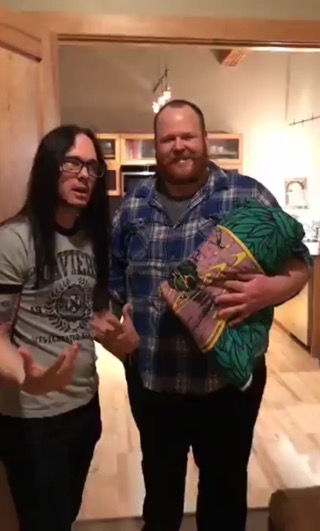 END_OF_DOCUMENT_TOKEN_TO_BE_REPLACED

In this issue of David Anthony Kraft’s Comics Interview, Swamp Thing series two artist Tom Yeates is featured and interviewed. The interview focused on  Yeates’ career and his experiences in comics. I was thrilled to read his Swamp Thing related responses. He talks a bit about working with Martin Pasko during series two as well as why he quit working on the title. In this post I’ve isolated portions of the interview pertaining to Swamp Thing but I recommend finding a copy of his issue and reading the entire interview. It’s  very insightful and a fun read. 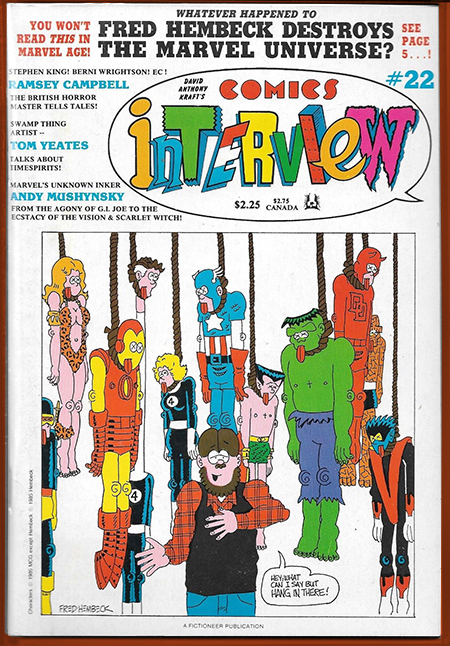 Below is Yeates’ entire answer regarding what it was like working with Pasko on the second series.

Later in the interview, Tom is asked why he stopped working on Swamp Thing. I highlighted a few key points that jumped out at me. Yeates again mentions Pasko’s busy schedule and then touches upon how his interest wained upon getting into Pasko’s story. As you’ll read below, Pasko’s agenda conflicted with Yeates’.

This bit below was my favorite portion of the interview. Yeates talks about Totleben and Bissette being the perfect fit for the series. Afterward, Tom discusses feeling conflicted by the morals conveyed in the story.

END_OF_DOCUMENT_TOKEN_TO_BE_REPLACED

Thank you for visiting. Yesterday marked the three year anniversary of rootsoftheswampthing.com. I’m surprised by how quickly time has flown by. Last year, interactions with fellow fans was up considerably compared to the previous year and it’s been wonderful getting to know more fellow Swampy fans. To celebrate, my fiancé surprised me with this awesome Swamp Thing cake. It’s decorated with hundreds of little leaves and roots. The more we ate, the more ominous Swampy looked… naturally.

I’m not one for celebrating the new year but I am excited to see what’s coming down the pike. For starters, the Swamp Thing fanzine I’ve been working on ships next month (February)! The book looks great and it’s filled to the brim with content. I’ve received a number of inquiries from fellow Swamp Thing fans who want to get their hands on the fanzine. Not to worry, books will be available for purchase in the coming month and I will provide plenty of info so that no one is left out. With the book, I’ll be sending out these Swamp Thing fanclub buttons while supplies last.

As I’ve said in the past -big or small- I enjoy stumbling upon articles and information that act as the connective tissue within the world of Swampy. This info helps to piece together the history and timeline of our favorite muck monster. The British superhero magazine, Fantazia offers up a small glimpse into the production of the two Swamp Thing TV series.

It’s 1990 and the USA Network is developing the Swamp Thing live action TV series. The blurb mentions that the show intends to be a comedy and Dick Durock is not in the running to return in “leafy greens”. As we’d eventually learn, Durock plays the role of Swamp Thing and the show acted more as a dramatic action series rather than a comedy. The show never quite ventured into the realm of comedy but many laughs can be had at the expensive of the production value and acting quality throughout the show’s run.

The blurb also mentions the animated series. Although the show appeared to be “bogged down” in 1990, it made its debut in April of the next year. The show only lasted five episodes. The live action series debuted July 27, 1990 and lasted for 72 episodes.

Karen Berger was only five and a half years in -as a comics editor- when this article was written and was working on some of DC’s greatest books. She discusses her experiences coming up as an editor along with her early work on House of Mystery. I was most excited to read her thoughts on Swamp Thing and her experience on the title. For the most part she only talks about Swamp Thing in regard to her editing duties and how the title is a bit easier, with Moore, Bissette and Totleben as the creative team.

I could hardly contain myself when I saw this illustration by Bissette and Totleben.

The two illustrated it for Karen and she confirmed via twitter that the piece still hangs in her home today.