Swamp Thing and Solomon Grundy have a long history going back to April of 1979, within DC Comics Presents #8. Their paths have crossed in various comics since ‘79 but I was recently reminded of Grundy’s appearances during Rick Veitch’s Swamp Thing run. In Rick Veitch’s transformative “Infernal Triangles” story arc (Swamp Thing #77-#81) a new plant elemental was ushered into the world to replace Swamp Thing. The story arc featured numerous DC characters, involved crossover appearances, as well as various mentions/references. The covers/comics pictured below do not feature Grundy but they helped launch the ”Infernal Triangles” story arc.

Recently, fellow Swamp Thing fan Alex Galer let me know that Veitch’s arc and Grundy provided more references than I was aware of. As I mentioned at the beginning, ”Infernal Triangles” involved ushering a new plant elemental into the world. Solomon Grundy was an intended host (albeit unwilling and unknowing) to receive the new plant elemental sporling. I’m sure you’re aware by now that the plan didn’t work out with Grundy and the new plant elemental. But, the failed attempt created repercussions that can be found within numerous comics including: Infinity Inc #39 (1987), Infinity Inc #46 (1988), Starman #48 (1998), Starman #49 (1999) and a handful of Swamp Thing books, primarily Swamp Thing #67 “The Wisdom of Solomon” (Series 2) from December 1987. Two books you can add to that list are below.

In Infinity Inc #44, Grundy can be seen leaving town, in search of the voices in his head. Questions are answered within Swamp Thing #67 “The Wisdom of Solomon.” The cover, seen below, may give the impression that Swamp Thing battled the Hulk. But, its Grundy. In Infinity Inc. #44, Grundy’s skin turned green in preparation for his merger with the Green and the Earth Elemental sprout.

Grundy didn’t make for a good host for either of the Elementals. He delivered a large serving of suffering for our friend Swampy.

END_OF_DOCUMENT_TOKEN_TO_BE_REPLACED

Sandman 3 features a whole lot of John Constantine, with just a hint of Swamp Thing. If you’ve not read Alan Moore’s Swamp Thing run, you may have missed some of the fun references to Swampy and Constantine’s adventures. 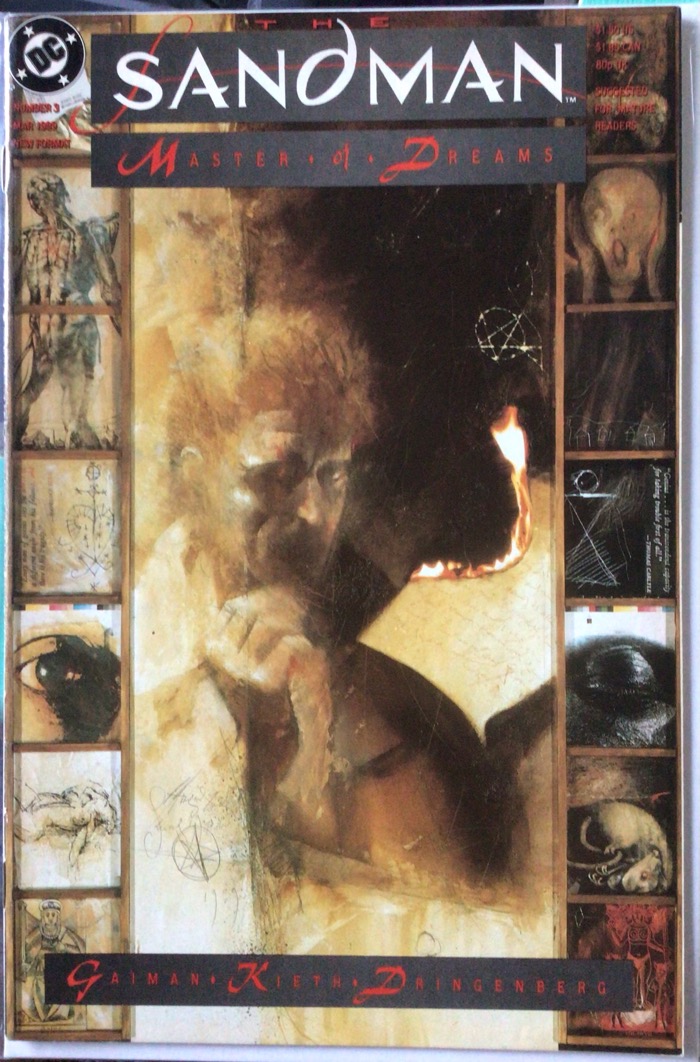 Morpheus is in town and he’s looking for Dream’s Sand Pouch. It was stolen from him some time ago and he’s intent on getting it back. John Constantine has had it for so long that he doesn’t remember where he put it, or if he still has it.

John is very surprised to see Morpheus at his door. Prior to this meeting, Constantine didn’t believe Sandman existed. 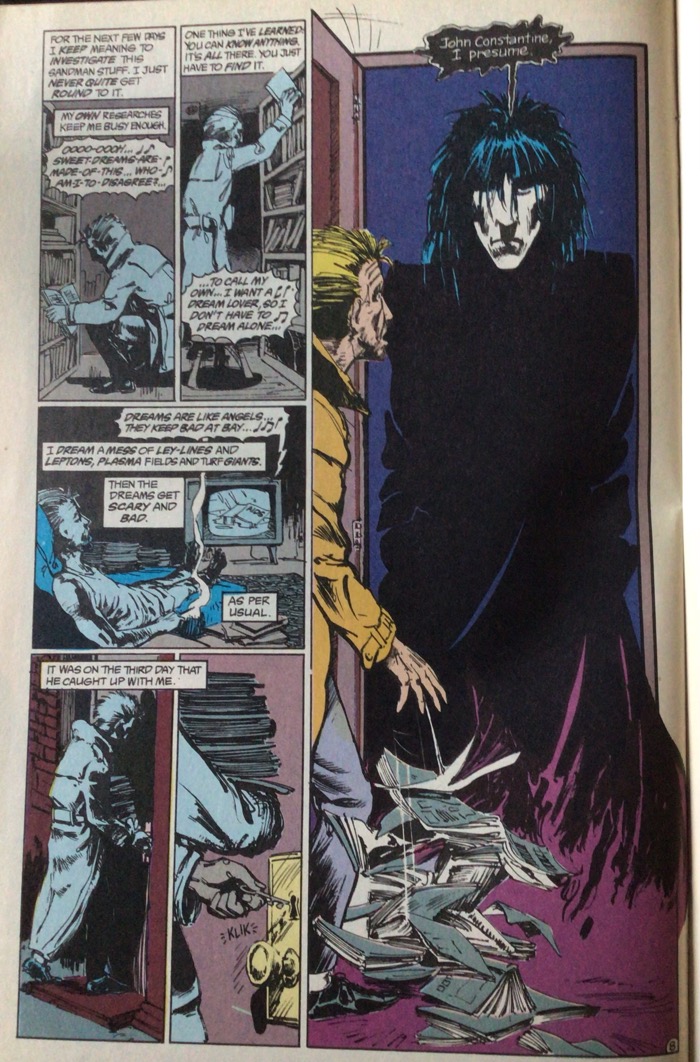 Constantine recalls that the pouch may be at Chas’ “lock-up” (self storage). Before the two travel to the lock-up to retrieve it, in typical fashion, Constantine takes the time to insult Morpheus. The best part of this insult is that John throws Swampy in on the ribbing!

Apparently John doesn’t find imitation to be flattering. I think Morpheus and Constantine would make a rockin’ trench coat band.

END_OF_DOCUMENT_TOKEN_TO_BE_REPLACED

Even though Swamp Thing is barely mentioned in this book, it seemed fitting to post it on Mother’s Day. There’s a lot of mom talk, family drama and a few really fun character mentions. 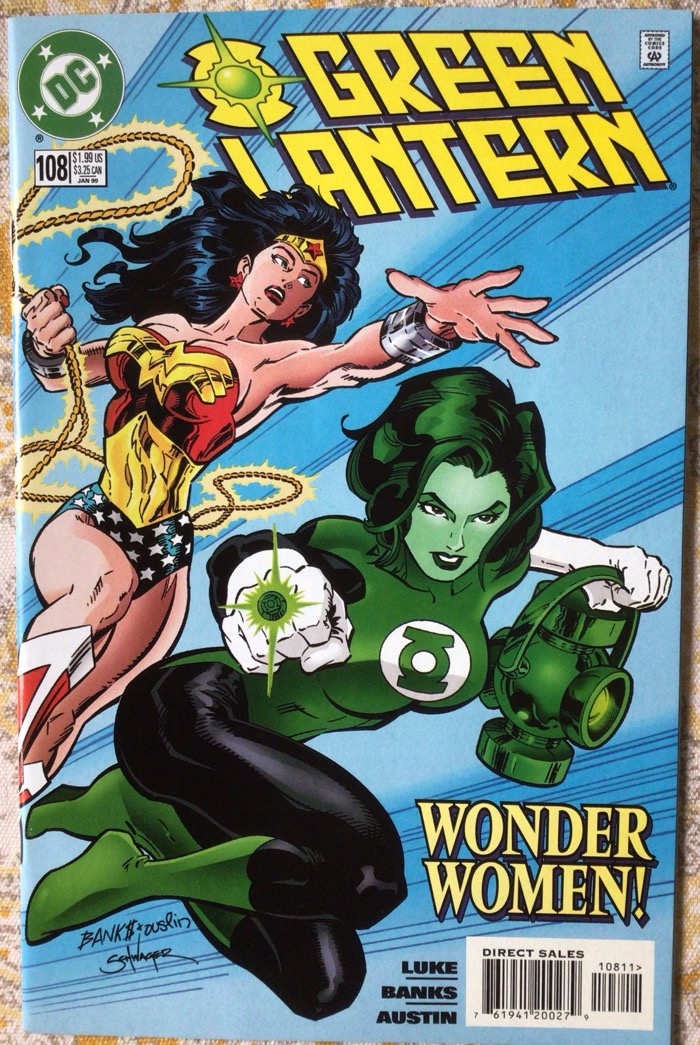 As to not bury the lead, Swamp This is referenced on the last page of the book. His name isn’t mentioned but Wonder Woman alludes to him in saying, “There’s something called the Green that a friend from the swamps has told me of…” 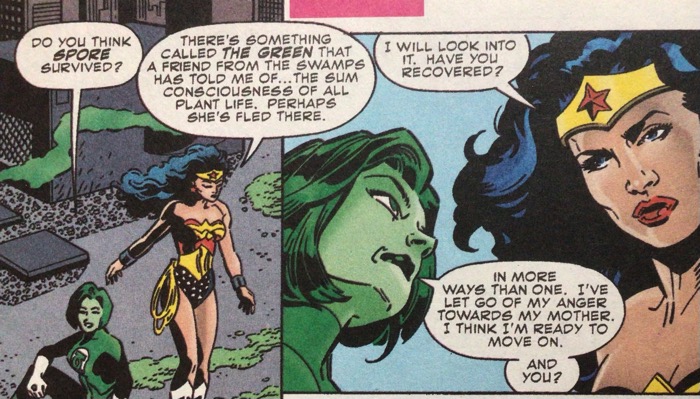 I got into the character Rose & Thorn by being a Poison Ivy completist. Poison Ivy appears in Superman’s Girl Friend Lois Lane #115 & #116 along with Rose & Thorn. The two characters are pitted against each other in those very early ‘70s appearances and I came to appreciate the vigilante, plant based powers of the Thorn.

END_OF_DOCUMENT_TOKEN_TO_BE_REPLACED

After posting a few comic books that referenced Swamp Thing, Billy Famine on Instagram messaged me to ask if I’d seen the one in Shade the Changing Man #66 from December of 1995. I hadn’t seen it and immediately found a copy at my local comic shop. It’s such a thrill to find more Swampy references and/or appearances. I know there are more out there and it’s so fun to get a tip from a fellow Swamp Thing fan. 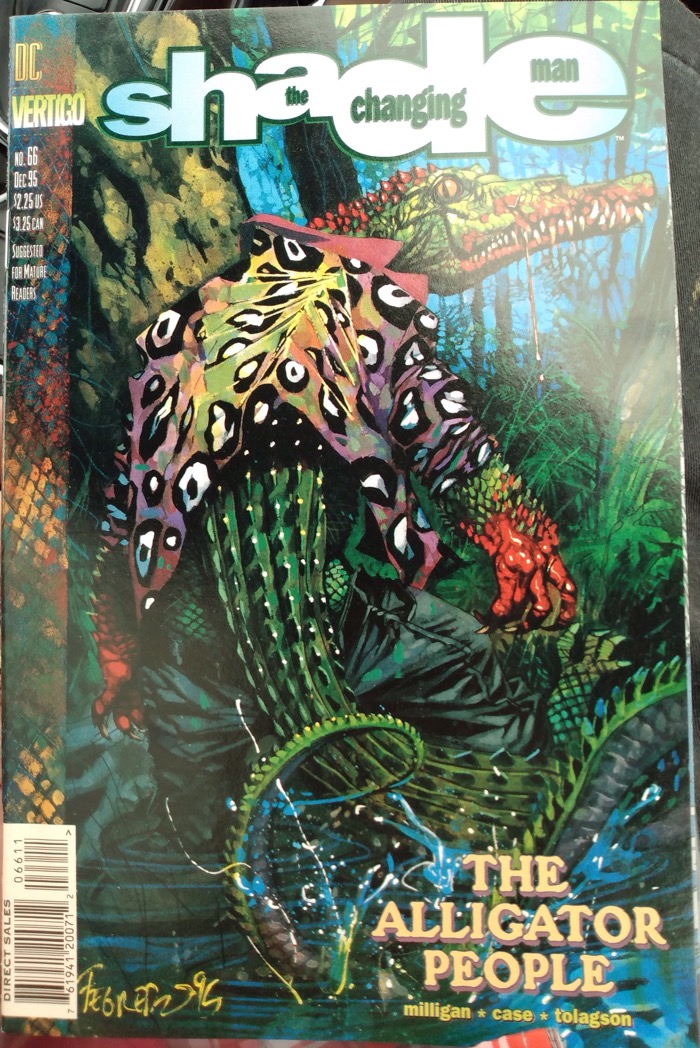 Shade, the Changing Man #66, “The Alligator People” takes place in Louisiana. Shade visits the area to help a friend and winds up dealing with a killer Alligator wreaking havoc. Shade gets a little nervous when he gets too close to the perpetrator. As you can see below, Shade can only hope it’s friendly Swamp Thing.

Below is the full page Swamp Thing is referenced on. END_OF_DOCUMENT_TOKEN_TO_BE_REPLACED 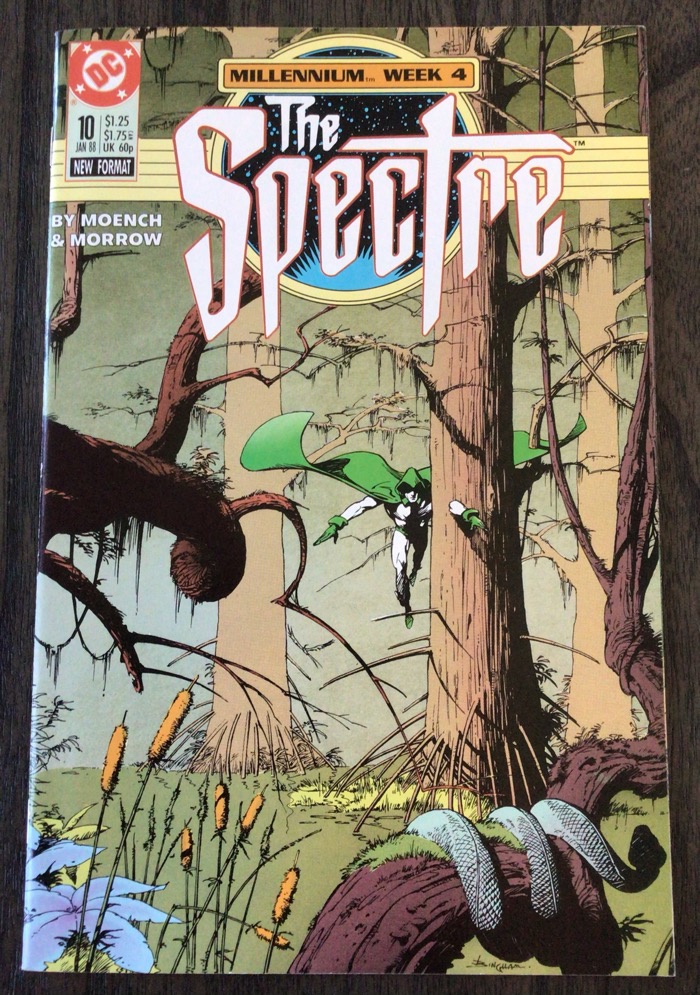 Based on the cool Swamp cover by, Jerry Bingham you’d assume that Swamp Thing makes an appearance within this book. Well, he doesn’t but he is referenced. The cover is how I stumbled upon this reference so it worked in my favor to judge the book by its cover.

Within the book, Jim Corrigan and Spectre are headed to Louisiana. Some guy died in Madame Xanadu’s parlor and Spectre senses that the answer is in the bayou.

A small diner in Louisiana begins to stir with excitement. Manhunters have been spotted in the swamps and locals are talking. The waitress alludes to the Suicide Squad and Belle Reve when she refers to it as, “first there’s that super-creep prison…”

she goes on to reference Swamp Thing, “…and, don’t tell me, more ’bout that so-called “swamp-man-thingie” ever’body’s been seein’ round here?”
I’d imagine most Swamp Thing collectors would pass on this book but it’s fun to know little mentions like this are out there. For completists, gotta get it. END_OF_DOCUMENT_TOKEN_TO_BE_REPLACED

Swamp Thing doesn’t appear in this book, his name not even mentioned. But, John Constantine does have a cameo and he alludes to our “mossy friend”… atop George Washington’s head.

How does this all come to be?
Exposition time: Within Swamp Thing #49 “The Summoning” (1986), Constantine awakens/enables Steve Dayton’s (Mento from Doom Patrol) powers. Constantine convinces the frazzled/unstable Dayton to put on his Mento Helmet in an attempt to make contact with the spirit realm. The two panels below, from Swamp Thing #49, give you an idea of how things went with the helmet. The two panels also give context to Steve Dayton’s mental state going into The New Teen Titans #22.

losing your mind while witnessing what could be the beginning of the end of the world is  not an ideal headspace when exacting revenge.

END_OF_DOCUMENT_TOKEN_TO_BE_REPLACED

Technically, a little bit of Swamp Thing makes its way into this book. 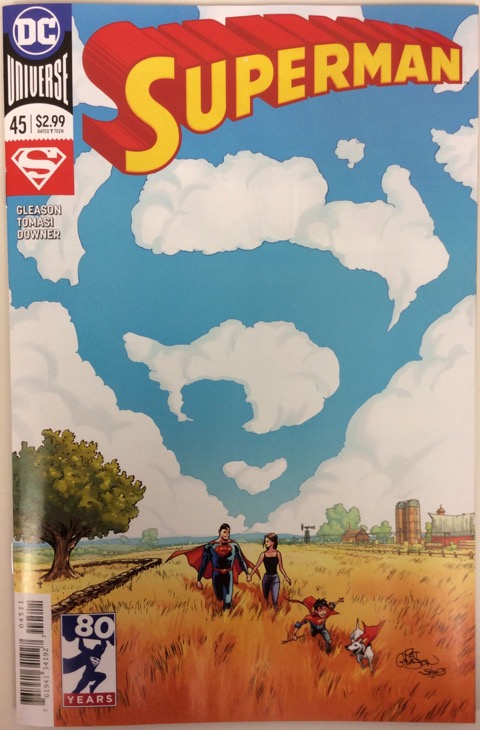 The Kents are moving out of Hamilton, with Patrick Gleason and Peter J Tomasi making the event special, filling the book with tender moments and life lessons. You’ll probably recall, Gleason and Tomasi crafted the amazing Superman Annual 1 that starred Swamp Thing, released at the tail end of 2016. Well, this issue (Supes 45) ties into the annual, and we find out what became of the gift Swamp Thing gave to Superman.

I should have mentioned that the Swamp Thing appearance in this book is small; about the size of a houseplant. 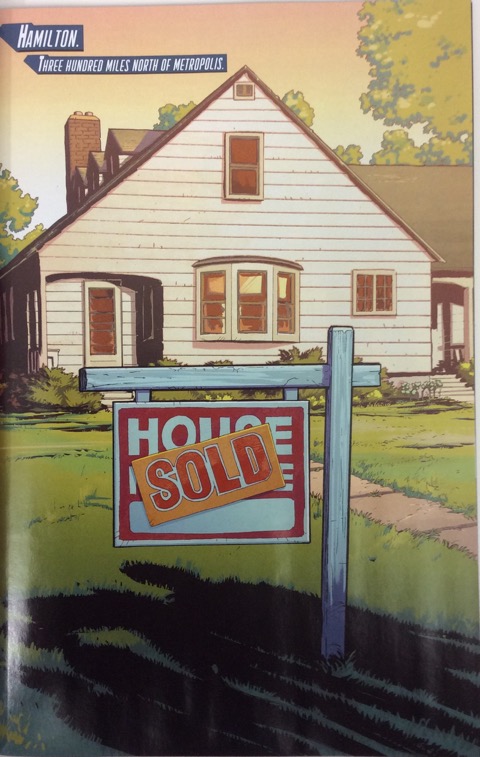 As the Kents finish their packing and prepare boxes for the moving company, Lois notices an item has been overlooked.

END_OF_DOCUMENT_TOKEN_TO_BE_REPLACED

There are some great Swamp Thing related books coming out in the next few months and to help keep track of the new releases I thought I’d share with you my pull list. Below is a reference sheet of the books. I’m going to try to keep the list updated and available on the site. Come to think of it, I may create a separate tab in the menu for the list. Ill keep you posted.

The much anticipated Swamp Thing series 6 by Len Wein and Kelley Jones will be released in January. Leading up to the series 6 launch, there are some other appearances and mentions worth checking out as well. I’ll avoid getting into the details so that I don’t spoil anything.

In stores now
Secret Six #7 (series 4) 2015
There’s Something at the Door Darling
I’ve been enjoying the new Secret Six series quite a bit. It’s nice to see Swamp Thing in the mix with the Six. I can’t wait to see how long he sticks around.

Tom Derenick does a great job on Swamp Thing, I really love his design.

END_OF_DOCUMENT_TOKEN_TO_BE_REPLACED

This is only the second Man-Thing book I’ve posted (1st), not because I dislike the character but because I’ve never taken the time to get into him. That and I’m not a big fan of the design and his name. I know, poor reasons to not read a character but I’ve herd worse. Speaking of which…

Swamp Thing makes his way into a Man-Thing book, yet again. This ST mention is a litte more abrasive. I give the folks working on Man-Thing a heap load of credit for being so open about their criticism.

80 pages of golden anniversary goodness and all I care about is the cover of the Boston Reporter. 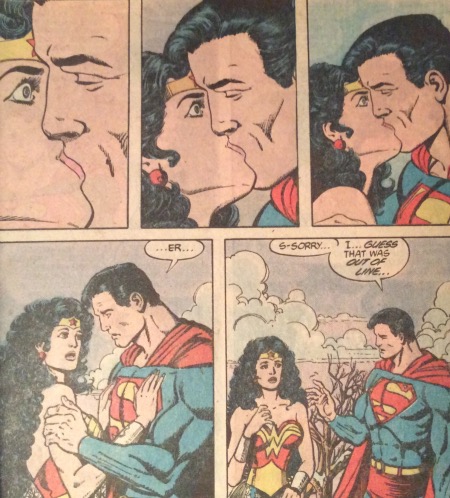 The collectibles page has been organized!
The task was on my to-do list for a while and I’m very proud of the results. Eventually, the collectibles will be linked to site posts, similar to the list. Speaking of the list page, I’ve been working on cleaning it up as well. I think organizing the books by type (appearances, parody, references, etc.), rather than everything together in chronological order, will be easier to search and reference. Since Swampy ads and articles are not as popular as appearances, reorganizing by book type should thin out the heard and distill the information.
And now… a Man-Thing book??

I have not lost my marbles. Thanks to J.R.G. and his comic confusion, Swamp Thing made his way onto the Man-Thing letters page.