Dossier Negro was a Spanish comic magazine published between 1968 and 1988. The series featured original stories but for the most part, it collected and reprinted horror comics. Swamp Thing appeared in Dossier Negro issue #207 in 1987. I’ve been on the hunt for issue #207 for a number of years but this edition is the closest I’ve come to obtaining it. This book collects issues 204-207 and was published in 1988.

The last and best comic in this book, as you can see from the image below, features a painting by Bernie Wrightson. The cover of Dossier Negro Issue #207 may look familiar because it first appeared on the wrap-around cover of issue #1 of DC’s Roots of the Swamp Thing-a five-issue limited comic series that reprinted the first 10 issues of Len Wein & Berni Wrightson’s classic first Swampy series.

Oddly enough, Dossier Negro #207 does not reprint Wein & Wrightson’s work, but features the seminal sotry, ”Anatomy Lesson” by Moore, Totleben & Bissette. Below are photos from the interior.

END_OF_DOCUMENT_TOKEN_TO_BE_REPLACED

This wonderful pocket-sized digest collects Wrightson’s first series run. It features 10 of the greatest Swamp Things stories. As I’m sure you’re well aware, the writing and artwork quickly put Swampy in position to be one of the greatest comic book characters. The book is broken up into chapters, each chapter representing Wrightson’s 10 classic issues.

END_OF_DOCUMENT_TOKEN_TO_BE_REPLACED 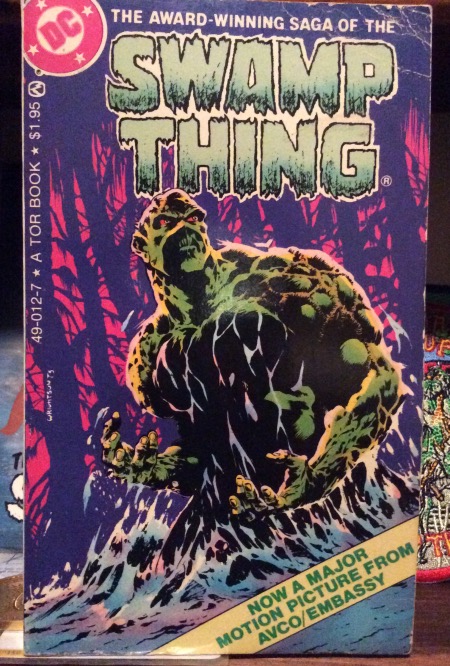 John, at Rainbow Comics, surprised me with a little paperback book this weekend. The Tor reprint features issues 1-3 of the first series.
4″x6″
160 pages
B/W
END_OF_DOCUMENT_TOKEN_TO_BE_REPLACED

Swamp Thing 24 (1975)
The Earth Below
I feel as if cake and balloons should accompany this post. I should have posted this last week but I have been swamped with work and can finally take the time to present…

the last issue of Swamp Thing series 1! The rendition of Swamp Thing on the cover is one of my favorites. I think the artist was going for motion blur but Swampy’s face looks mossy and shaggy, how I’d imagine a swamp monster would look.
It is interesting that they depicted Swamp Thing fighting Thrudvang yet Alec Holland is in the background. It is strange that Thrudvang is speaking on the cover but the issue hints at him being mute. If I remember correctly, he doesn’t speak in issue 23 & 24.

The title page would look great on the side of a van or airbrushed on a t-shirt. END_OF_DOCUMENT_TOKEN_TO_BE_REPLACED

Swamp Thing 23 (1976)
Rebirth and Nightmare
I’ve always enjoyed the last two issues of series 1. Leading up to these issues it becomes very clear that the book was struggling. The issues don’t string together very well and Swamp Thing’s adventures/mishaps are all over the place. Joe Orlando continuously mentioned the numerous creative team changes in the letters pages. I guess the quality of the book suffered with all of the changes and issues in flux. NEVERTHELESS, That’s what makes your favorite characters great. Their portrayal amid shortcomings can be as endearing as their most noble book.
Swamp Thing’s never ending misfortune has now become comical. He has endured 23 issues of agony and bewilderment. Most comic book heroes have a place of sanctuary. Batman has the Bat Cave, Superman has the Fortress of Solitude, Spider-Man has his bedroom but Swampy is just roaming around. and he’s been kidnapped… a few times. 24 issues is a pretty decent streak for bad luck.

They changed the Swamp Thing title design on the cover! The title went from the traditional horror font to this goofy, nondescript title. 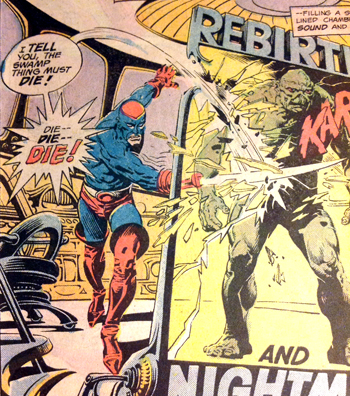 I believe the passion is derived from his Rick James boots. END_OF_DOCUMENT_TOKEN_TO_BE_REPLACED

Swamp Thing teleports from a space ship to a desert in Arizona.

Swamp Thing is staring at the desert. END_OF_DOCUMENT_TOKEN_TO_BE_REPLACED

Swamp Thing is neck deep in it. 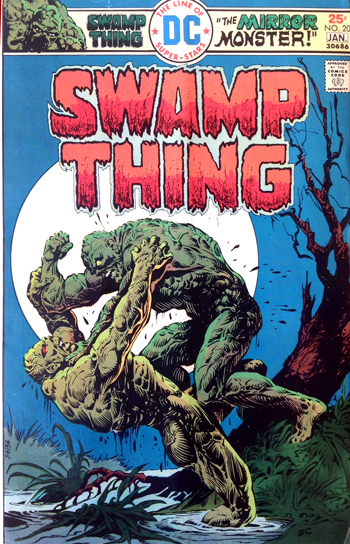 Swamp Thing vs Swamp Thing. I’m sure you can guess who wins.

Need Swampy to throw a tank? He can handle that.

Want a swamp monster who has tingling feelings and emotions?
Swampy can do that. END_OF_DOCUMENT_TOKEN_TO_BE_REPLACED 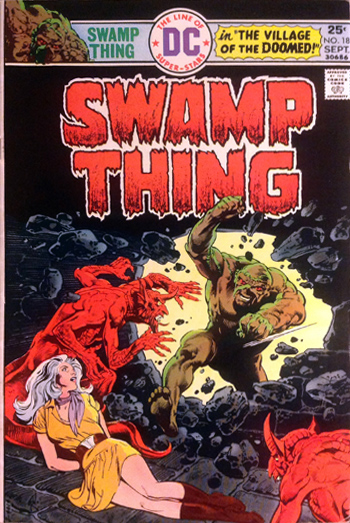 Swampy, Cable, Abby & Bolt make it back to the US only to find a twisted little retirement town best described as “Geriatric Disneyland”

END_OF_DOCUMENT_TOKEN_TO_BE_REPLACED 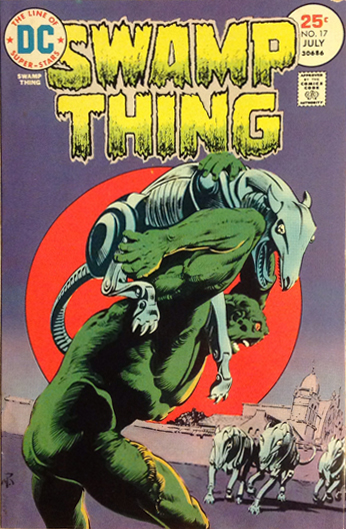 I’ve always felt that this cover was Swampy’s Boston Terrier look. His strangely proportioned face and pug nose is a little disturbing. Maybe it’s because this is a dog filled issue.

Swampy has dealt with a lot of adversity and strange occurrences in his short life so it stands to reason that lightening would be the next item on the list.