Gone, gone the form of man. Oh, look it’s Etrigan… breaking through another window. The tale involving the Monkey King carries on as Etrigan takes invasive maneuvers at Elysium Lawns. 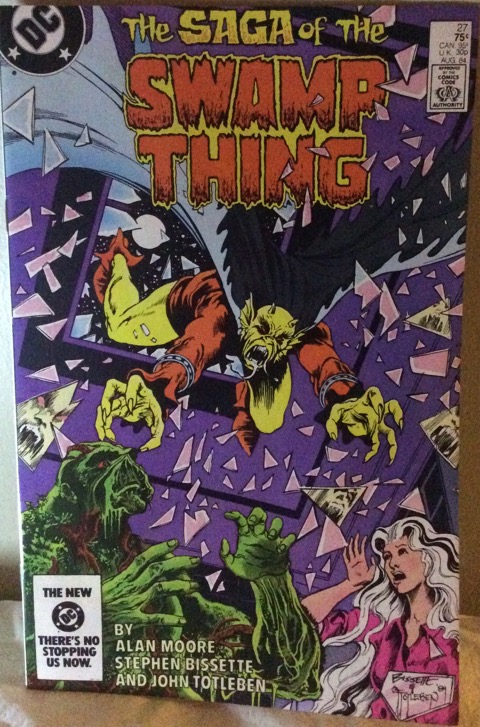 The evidence is there. Jason Blood’s Morning After Window Repair biz could be a lucrative venture. His arial entrance is repeated on the cover of John Byrne’s Wonder Woman 107 (1996). 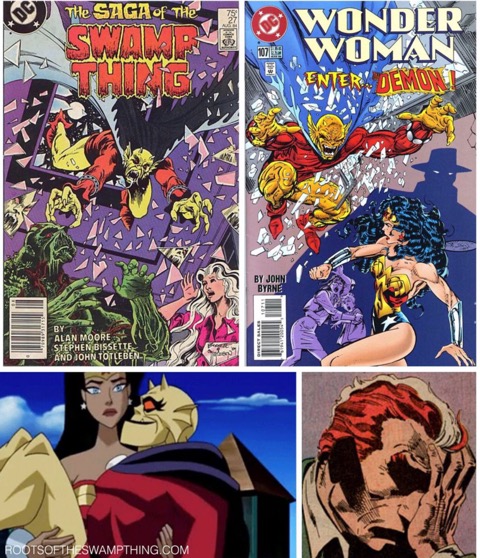 Pandemonium’s broken out at the children’s hospital. Two demons and a vegetable monster duke it out while Abby and the kids of the Elysium Lawns hospital find a safe place away from the chaos. 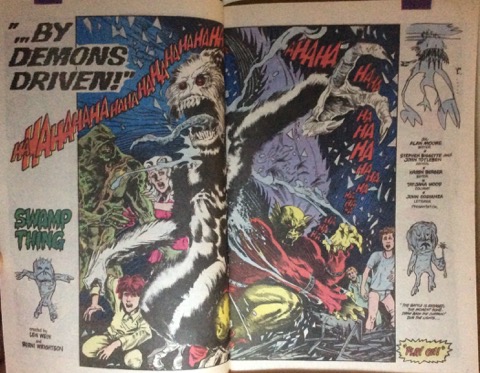 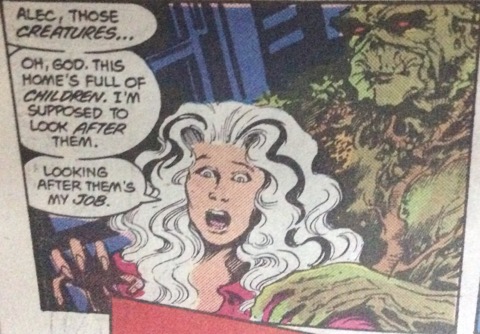 It’s clear that Etrigan is here to destroy the Monkey King but at what cost?! 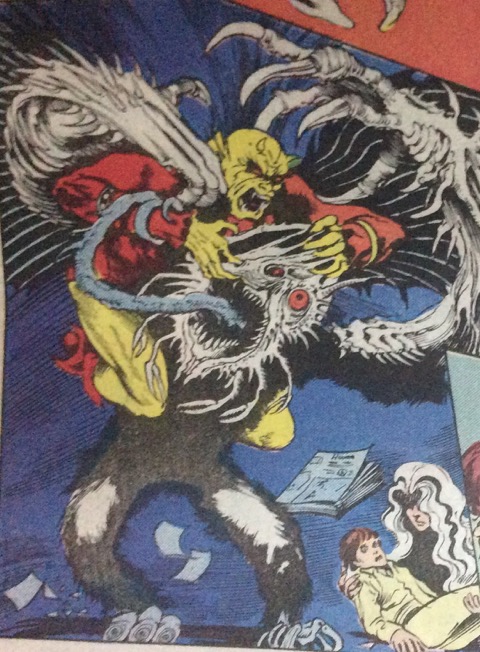 Abby’s new job is proving to be extremely stressful. Swamp Thing joins the fight so that she can get Paul to a safe place. Etrigan realizing the Monkey King is a manifestation, influenced by Paul, has no problem taking on the collateral damage. If he can’t beat the monkey, he’ll have to destroy Paul. 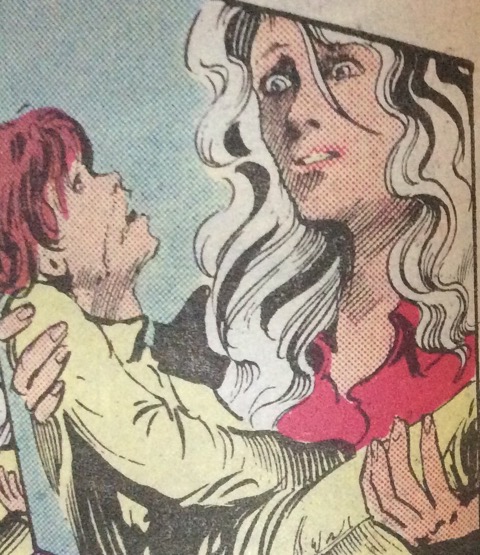 Meanwhile in a mangled sedan, Matt Cable comes to grips with his current status. He’s diying but tries to hold on. He is about to be stripped of his sound and humanity. 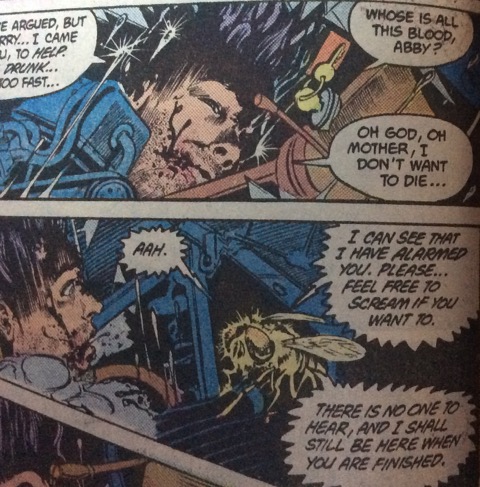 Back at Elysium Lawns, the fight’s been taken outside. Etrigan is aware that the monkey exists because Paul allows it to; it feeds off of his fear. ETrigan, who’s more than willing to eliminate Paul to destroy the monkey, gets a rude awakening as Swamp Thing defends the boy. Swamp Thing clubs Etrigan in the face with a tree. 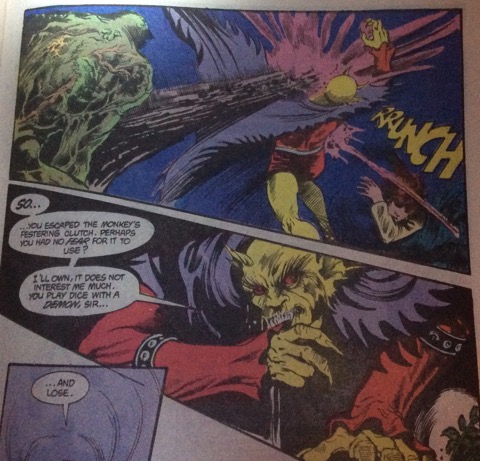 The two exchange blows in one of my favorite scenes in the book. Etrigan claws a Swampy’s arm off. Swamp Thing, barely missing a beat, reattached the arm and clobbers Etrigan with it. I think it would be best described as a “badass move”. Not only is it a cool move, it’s a great example of the creative team fleshing out Swamp Thing’s abilities and his awareness. 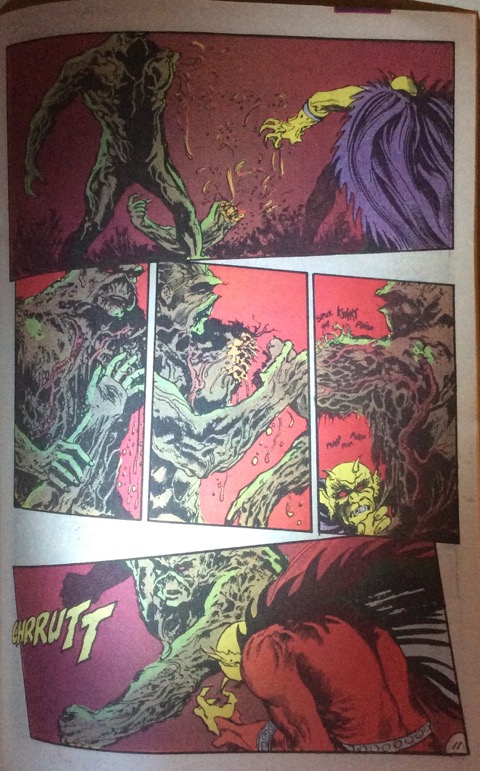 Back to suffering Matt, there’s no way out. He’s got a devil on each shoulder. The temptation of life wins over… but it’s no life at all. 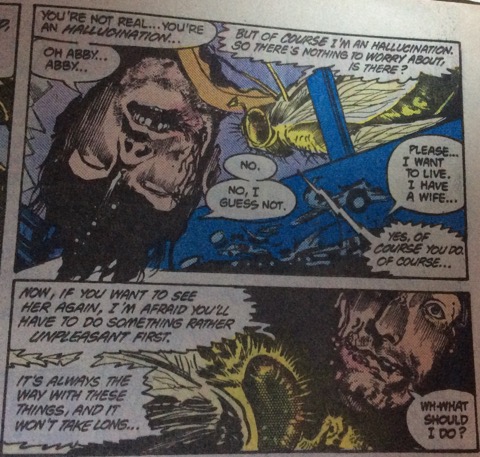 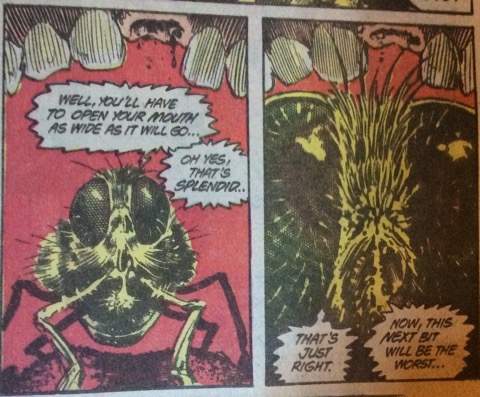 Back to Paul, Abby and the Elysium melee:
Paul realizes the Monkey King takes the form of whatever frightens you most. In this case Abby fears Matt Cable. Interesting foreshadowing for what’s to come. 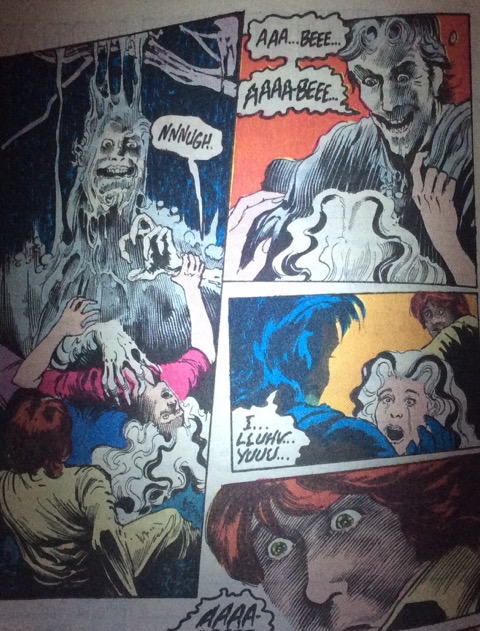 While it attacks Abby, Paul comes to her rescue by calling the attack off. Startled, the Monkey tries to take the form of his mother, trying to tend to his worries. The twisted, transforming monster is terrifying. 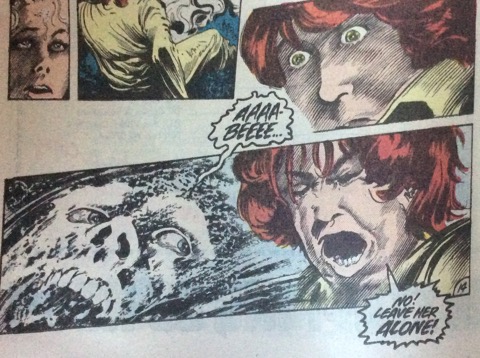 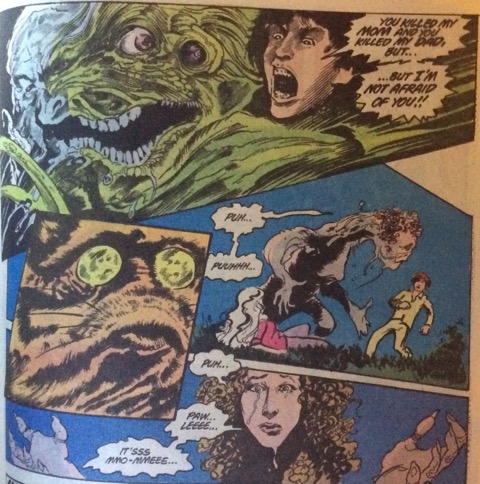 Paul gains control. He reaches deep within himself, controls his fear and sends the Monkey King packing. 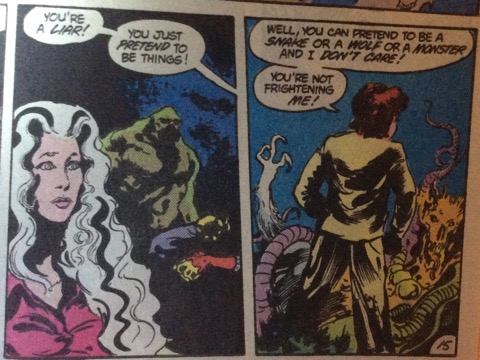 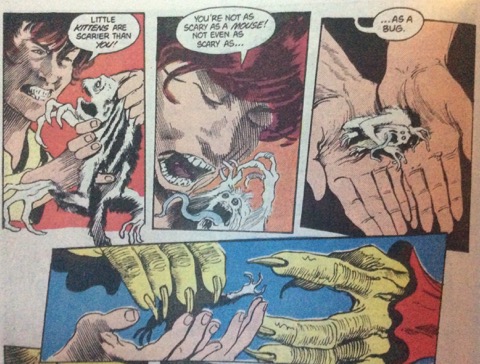 Without fear to feed from the evil monkey shrinks down to a bite-sized treat that Etrigan devours. 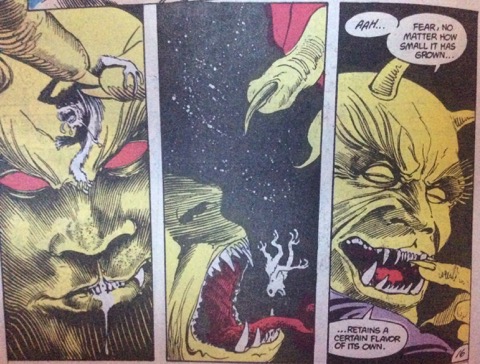 Although the Monkey King is no more, trouble has only begun in Houma, LA. Etrigan gIves vague warnings to Abby of impending danger and a meddlesome foe. 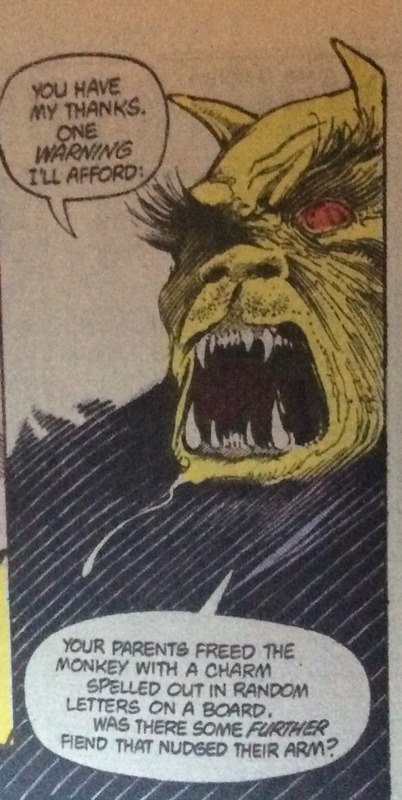 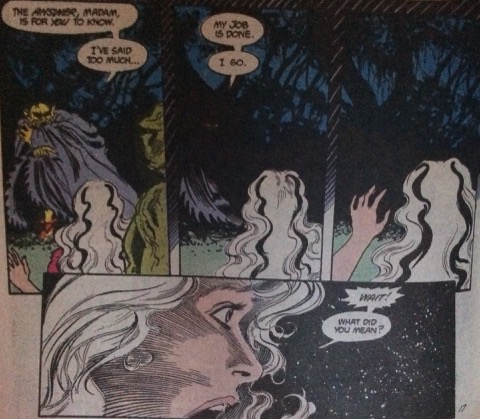 Obviously Abby wants to know more so she follows Etrigan, leaving Swamp Thing to babysit Paul. The two look quite funny not knowing what to do with the other.

Oddly enough they make quick friends. Paul asks Swamp Thing if he can go home. Sadly, there is no home for Paul. While Swampy takes Paul to a safe place there’s a tender moment where they ask each other if they were scared. 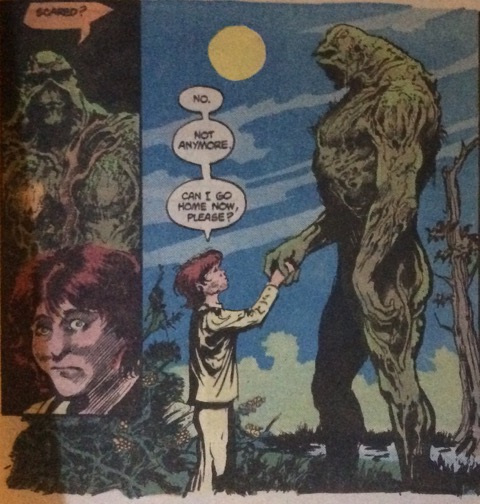 It’s a beautiful moment and an opportunity to show Swamp Thing’s compassion. He may have resigned to the fact that he is no longer connected to his former, human self but he can still care and connect with humanity. 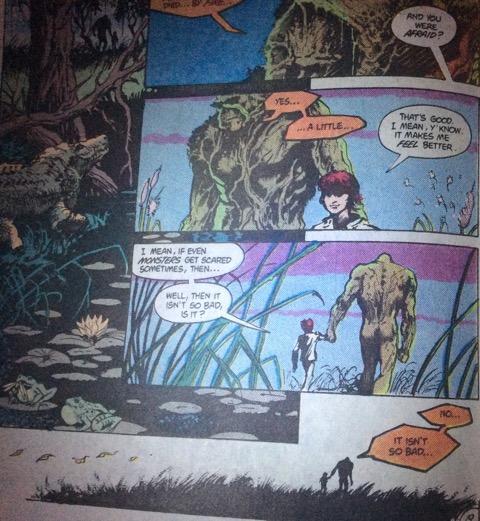 Abby catches up with Etrigan who has now transformed back into Jason Blood. Although surprised, this kind of craziness is really nothing new for Abby. By now she’s seen it all. 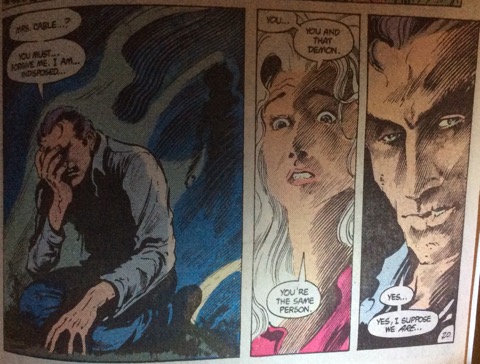 The dust settles, Swamp a Thing returns to the swampy and Abby begins her tired walk home in the rain.

After a day like today she could use a dose of normality. It will never be normal for Abigail Cable. Matt just happens to pull up next to her to give her a ride home. He has no idea what she has gone through this evening. She has no idea Matt Cable is dead… 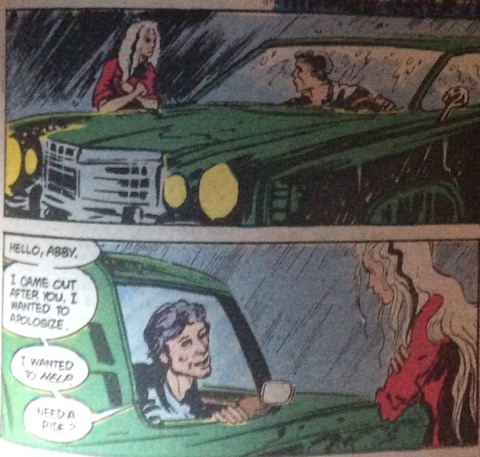 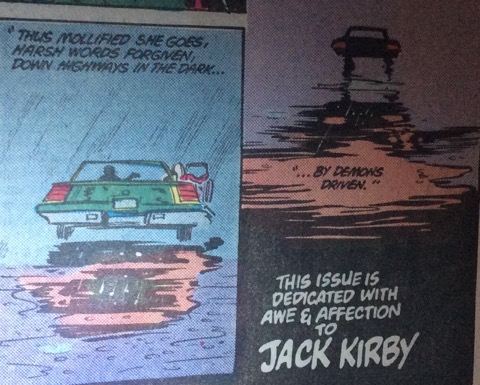