There are a number of reasons why this book is great but it’s special in that DC released it without the Comics Code approval. With this issue, Swamp Thing takes another significant step in leaving his mark in comic book history. Moving forward, DC decided to stop submitting the book for Comics Code approval. This further allowed the creative team to explore taboo subject matter and the nightmarish situations within Swamp Thing’s world. 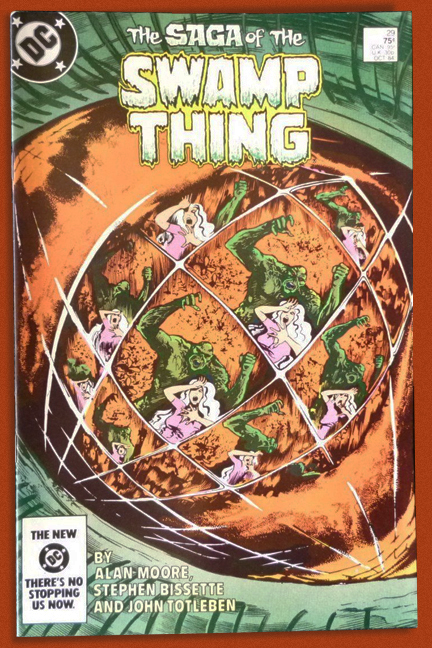 I can recall the progression of most Swamp books but I tend to forget the pacing of the stories. Rereading the chronology revitalizes my excitement for the story telling and craftsmanship. This issue is a great example. It’s terrifying what Abby goes through and Moore tells the terrifying experience all too well. So well that it would  eventually make him the subject of intense debate on how he depicts and perceives women. 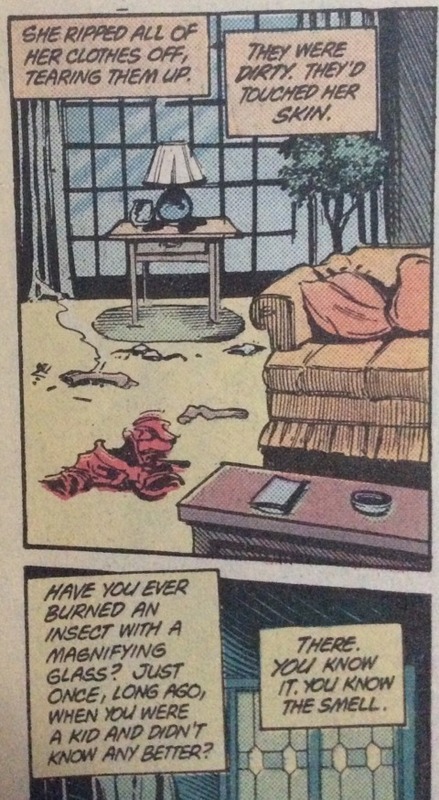 I’ve read this book numerous times and it still seems to kick my brain around. This is the seemingly cursed, nightmare life of the Arcane family. None of them get out unscathed… 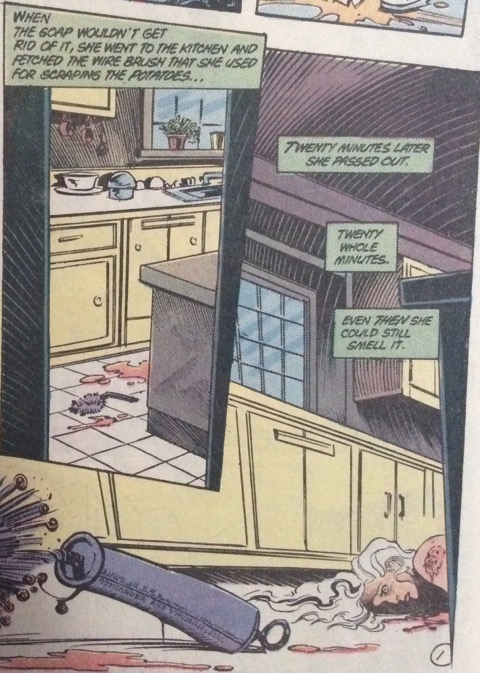 This gruesome potato scrubber is brought to you by Ostrander and Truman, Inc. Made in USA. The almost illegible Easter egg could go unnoticed. Is this potato scrubber a gift from Grimjack? 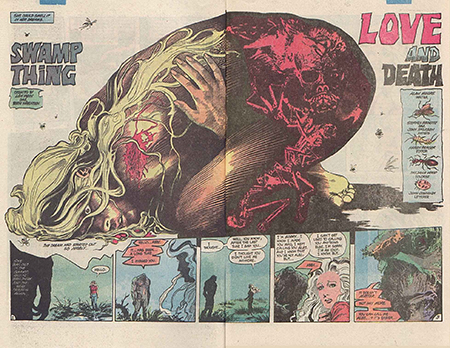 Bissette and Totleben’s splash pages are amazing. The creative pair get a work out in with the ideas conveyed and amount of detail rendered.

This issue -like the previous- involves a series of flashbacks woven throughout the present. Moore starts to explore the peace found within the green, contrasting it with the decay and misery within death/rot. An intense dichotomy, both heaven and hell 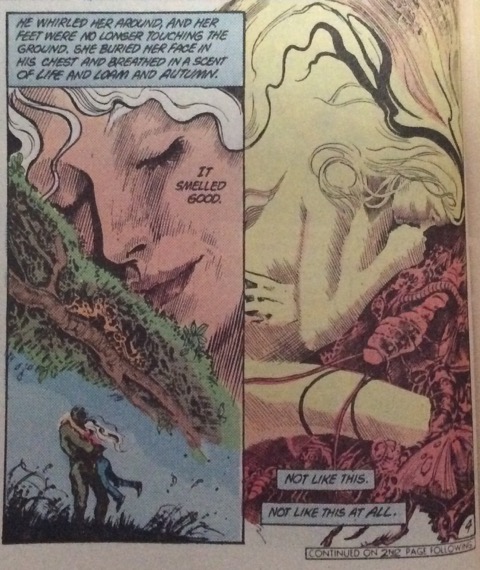 Last we saw Matt Cable a terrible accident forced him to make a deal with a familiar,  unsavory character.

Cable is looking better than ever and appears to be having a go at a normal life. He presents Abby with their new house…

Within the house the mirror on the vanity exposes the grave situation. I’m not positive but the familiar looking vanity may be paying tribute to House of Secrets 92. 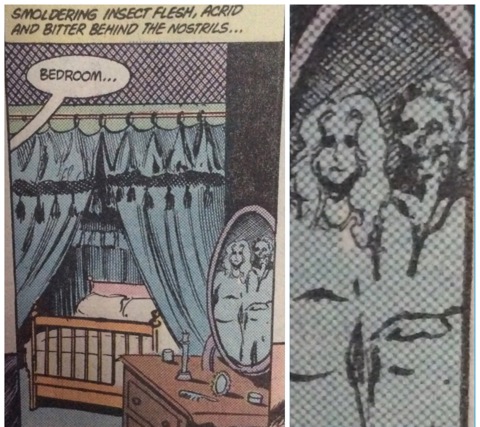 Cable reveals to Abby that he also has a new job. At the new Blackwater Recorporations office, Cable introduces Abby to his new coworkers.

Matt’s sober, alive, new house, the new job; things are too good to be true.

Abby is unsettled by Matt’s change in behavior and sees through the facade. Even if it’s only for a moment…

Even after seeing the monsters for who they really are and smelling the stench of rot and insects, she pretends things may be normal. She indulges for just one night…

the present and flashbacks begin to collide as Abby puts the pieces together. The Matt Cable she knows is no more. Who is Matt Cable and for how long? It’s like watching a car crash in slow motion, in reverse; knowing the outcome never softens the blow.

Abby knows. Matt Cable has been replaced by an imposter and she knows who’s capable of such deviance. The death, decay, flies, strange dying bird,  the warning from Jason Blood… 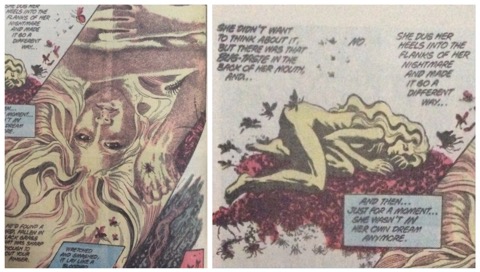 In the midst of the chaos… an Alan Moore sighting.

In shock, naked, bleeding on the bathroom floor; Abby snaps out of it long enough to get clothed to flee the house. She goes to open the front door and Matt’s there. He’s with his “coworkers” and they’ve come for Abby. Throughout the book it seems that we are witnessing the nightmare, but Abby’s nightmare has only begun. The ending of the book is so disturbing that I still get a bit nauseas when reading it after all this time. I always hope the best for Abby but I understand that she will experience the very worst of your imagination.

Matt Cable is no more. Anton Arcane (Abby’s uncle) has been living as Abby’s husband… 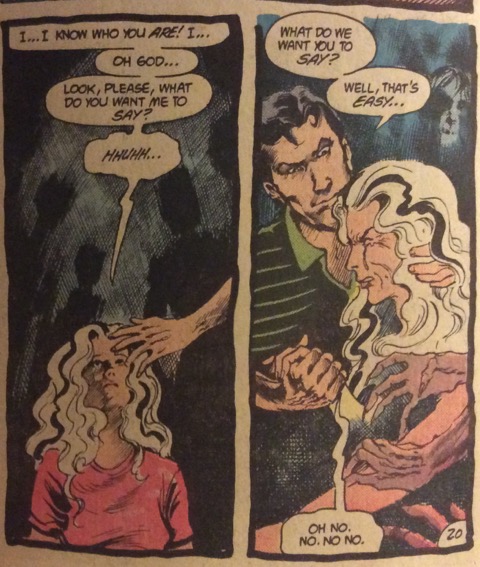 Love and Death is a gruesome, disturbing, horror book that is done extremely well by all involved. After Moore established Swamp Thing’s origins in previous issues, he really digs his feet in with this book.

Letters Page:
the fan letters are positive and everyone is loving Swamp Thing.

Extra-special bonus pin-up! Another beautiful page by Totleben and Bissette.