There are a number of things that confuse me about this car. The non-DC related toy features the name of Swamp Thing paired with screwy, difficult to decipher lenticular imagery. The suicidal pirate (pictured on the backing card) should have shaken my interest but the “Swamp Thing” hood drew me in. 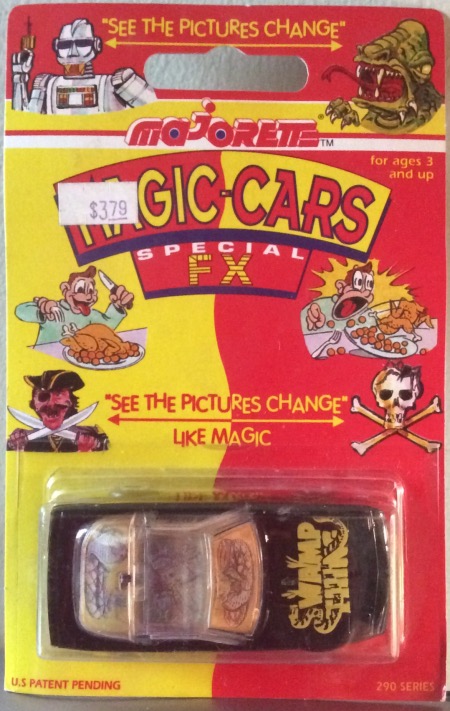 The roof displays some sort of monsterous flying fish and multi-armed monster that appears to be smashing something. The phoots that I took aren’t clear and neither were the lenticular images on the car.

The back window features another snake along with a vampire/crab looking Un-Man. Maybe the humanoid monsters on the car are trying to represent Un-Men? I have no idea but the car, never the less, has made its way into my collection.

I like that “Swamp Thing” was paired with the Corvette; a Scooby-Doo looking mini-van would have been great too. Or, perhaps a bayou buggie. The rest of the cars are listed on the back. The Swamp Thing name appears to be the only branded character that they used. The motor companies are all clearly referenced in the trademark information in fine print, at the bottom.