Swamp Thing 24 (1975)
The Earth Below
I feel as if cake and balloons should accompany this post. I should have posted this last week but I have been swamped with work and can finally take the time to present…

the last issue of Swamp Thing series 1! The rendition of Swamp Thing on the cover is one of my favorites. I think the artist was going for motion blur but Swampy’s face looks mossy and shaggy, how I’d imagine a swamp monster would look.
It is interesting that they depicted Swamp Thing fighting Thrudvang yet Alec Holland is in the background. It is strange that Thrudvang is speaking on the cover but the issue hints at him being mute. If I remember correctly, he doesn’t speak in issue 23 & 24.

The title page would look great on the side of a van or airbrushed on a t-shirt.

yah, wake up Alec. You’re not a freak anymore. 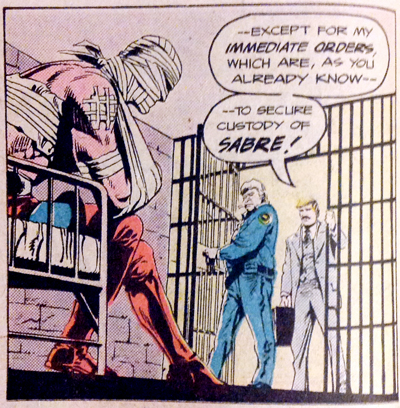 Sabre got his butt handed to him and thrown in the clink in issue 23. How did he get arrested? We may never know. With his luck and lack of success in the field, he should stick with the name Agent Zero.

Someone captured this candid footage of Swamp Thing throwing trucks and bulldozers. I bet there are hours of candid home movies at the Thing residence.

As we saw in issue 23, Swamp Thing’s adversaries spare no expense in creating expensive statues and glass panels of their foe.

If you’re going to build a life sized statue of your sworn enemy, you have to be ready to destroy it.

Thrudvang used to be a man. Now Thrudvang is an elemental. An elemental you say? That sounds familiar. We will get into all that business in Series 2. 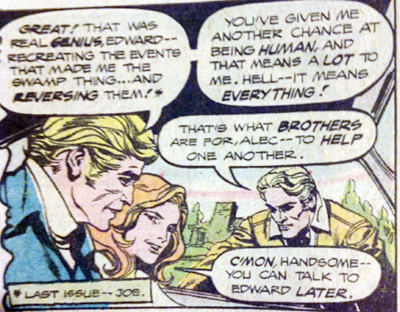 I could have sworn she was Ed’s gal pal but now she has the hots for Alec.

What’s wrong with Alec? Alec’s new body is generating an ass and Alec is ready to work it.

Not the lost arm! We saw how that turned out in issue 20. 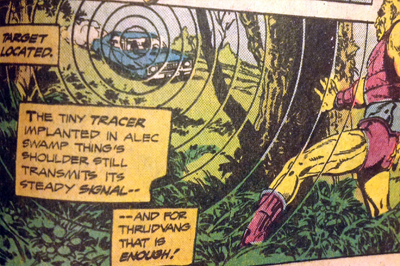 Alec Swamp Thing is a terrific name. I’d imagine that over time the name would be condensed/simplified to Alec Swang. 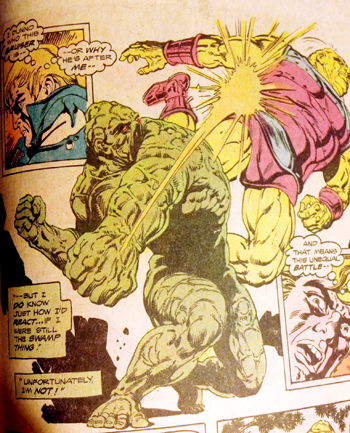 This page is similar to the cover but the tables have turned. Well, the tables haven’t actually turned. Alec is taking the time to daydream that he is Swamp Thing, beating up Thrudvang while in reality Thrudvang beats him up.

Ruth vs. The Man-Mountain is the sequel to Joe vs. The Volcano. It is terrific.

I’d like to blow this panel up or repaint it for wall art. It reminds me of a Lichtenstein. 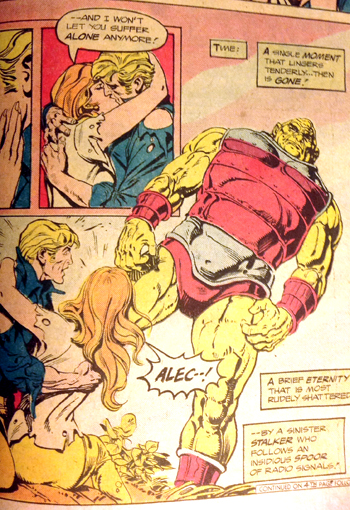 Even though series one ran off the rails, I enjoyed the action and suspense of issue 24. I felt for Alec and Ruth. Thrudvang is quite the menace. He has many unstoppable powers and has the couple on the run.

Hawkman vs. Swamp Thing would have been a great storyline. The abrupt ending to the 1st series must’ve been tragic in ’75. As we have seen in numerous media outlets, Swamp Thing has had many chances and this is only the beginning. I am about to enter a world of merchandise, movies and cartoons. The muck encrusted man becomes a giant and he finally leaves his mark on the world. 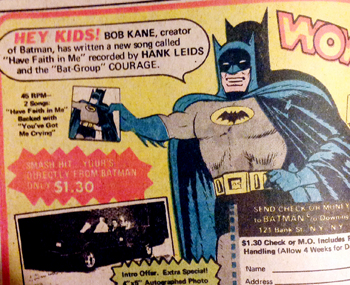 This is a 45 I’d like to track down. Is the Bat-Group named Courage? I can’t tell. That’s a name I’d associate with Batman’s band. The B side is “You’ve got me crying”. I can only imagine it involves Batman ranting about the injustice and sadness he feels for his parents. 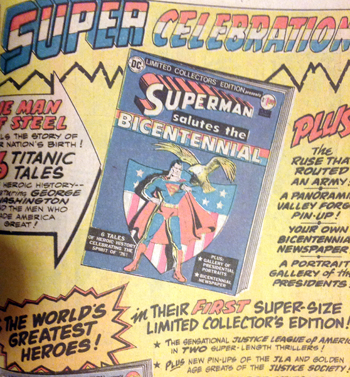 John, I don’t mean to upset you but there is a camel, yak looking animal staring at your back side.

sadly it will not Joe.