The only thing in Swamp Thing’s life that is normal, steadfast or makes any sense is Abigail Cable. She’s evolved into the glue that helps hold together the humanity and the muck. In this Annual, Swamp Thing goes to hell and back to save her.

It was clear that Moore’s scope to develop the complexities of Swamp Thing was seemingly limitless. When I first read this book I remember being blown away by Swamp Thing’s ability to harness his powers and quickly understand his capabilities. It’s the complex, quickly moving continuity that I now judge other books by. Moore doesn’t linger on exposition. It’s full speed ahead…

When figuring out how to make his way down to hell, Swamp Thing doesn’t seem completely out of his element. The concept is wild but from the get go (issue 20), Moore established that things aren’t what they seem. Swamp Thing is no longer the physical make-up of Alec Holland and the Swamp Thing universe became much more complex. Moore made it very easy to buy into the new direction and suspend disbelief. When he involved Jason Blood/Demon, Phantom Stranger and Deadman, the characters held a sense of greater wisdom. They provided direction and aid for Swamp Thing but also held their cards close to their chest, acting as cryptic guidance. Paired with a character (Swamp Thing) that is quickly developing his seemingly endless abilities, the mythology feels established and Moore has only scratched the surface. A misunderstood good guy with the powers of a god, involved in something even greater than he, is pretty darn intriguing. 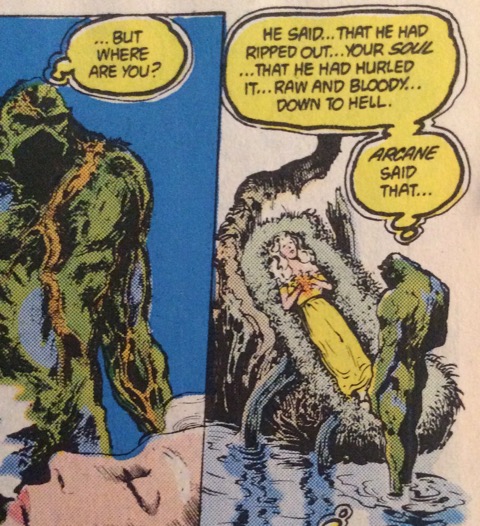 If Arcane can claw his way back from the dead (4 times at this point) surely Swamp Thing can give it a shot… don’t call him Sherlly.

Alec lays Abby on the grass and takes to the Green for an answer in finding her soul. He seeks to find her in hell and quickly enters the Region of the Just Dead. “Beyond life itself.” 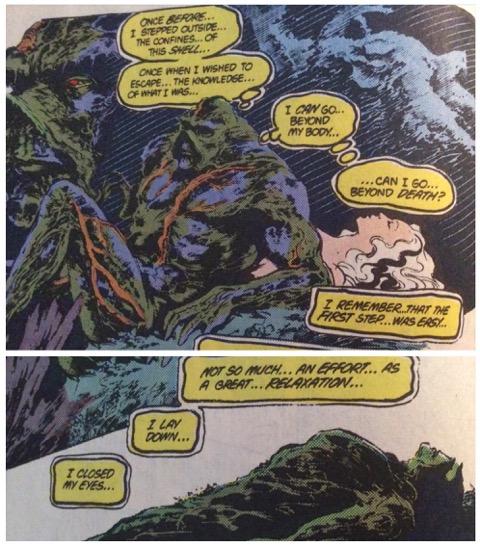 Moore and the visuals team incorporate numerous locations and characters in this Annual. It’s Swampy’s most ambitious travel log to date. 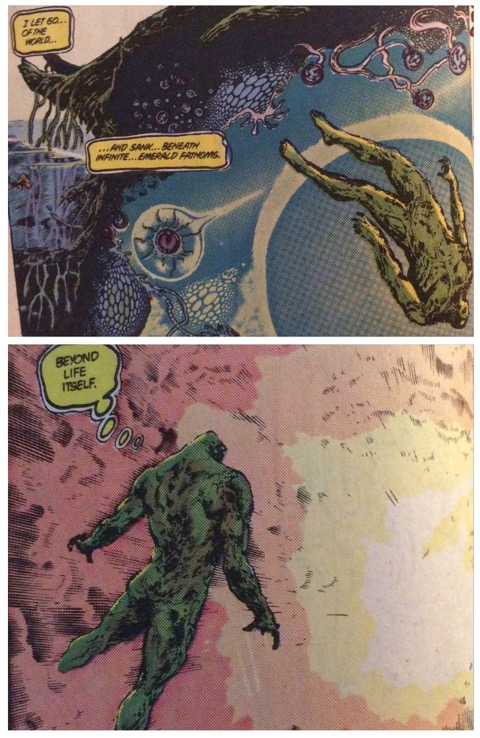 When traveling from the land of the living to hell, a few layovers are to be expected. The Region of the Just Dead is Swamp Thing’s first stop. Upon arrival, Swampy comes across a panicked woman who’s in search of her son. It’s quickly understood that the mother and son died in an automobile accident and need to be reunited before passing on to heaven.

Deadman is currently on the welcoming committee in this realm and offers to help Swamp Thing the best he can.

I love their brief interaction relating to previous encounters. As they get reacquainted, you’ll most likely recall that Deadman and Swamp Thing teamed-up (in a way) in Challengers of the Unknown 83–87 in 1976. 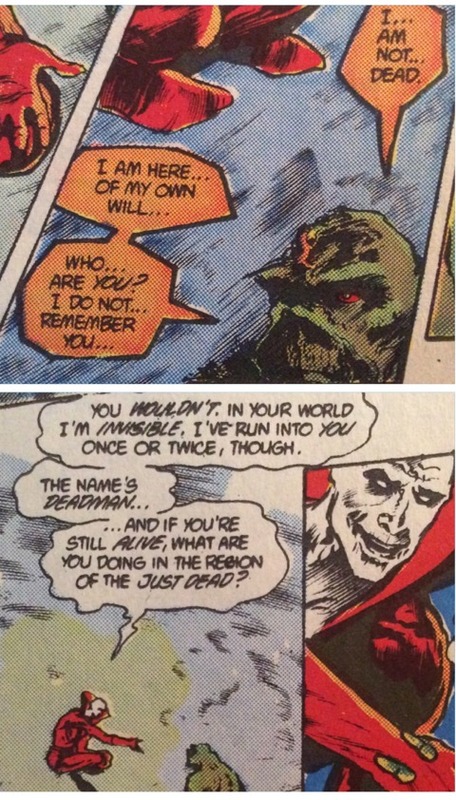 They pass grazing poltergeists in the ectoplasm, born of violent emotions seeping in from the living world. 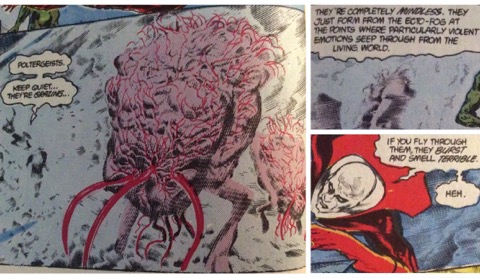 The Phantom Stranger witnessed Arcane’s descent to Hell through the Region of the Just Dead. He is like a “black, shrieking comet, spitting molten tar”. The noise and stench are unbearable. 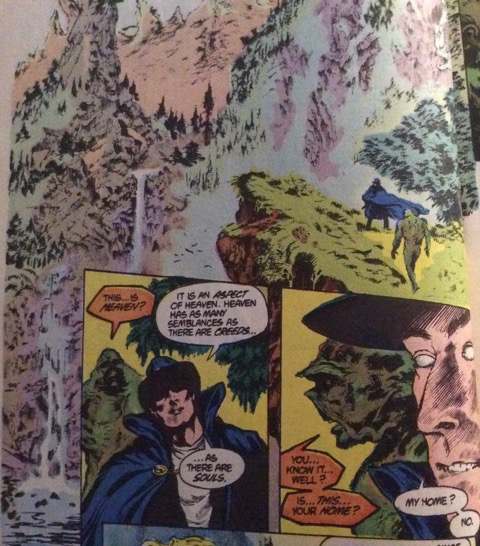 Greeting them in Heaven is the real Alec Holland, who thanks him for recently freeing his soul –ref SOTST 28. The Stranger is surprised to learn that Holland and Swamp Thing are separate individuals. Holland wants to enjoy Paradise more before being reincarnated, but Linda is ready to return and have children. 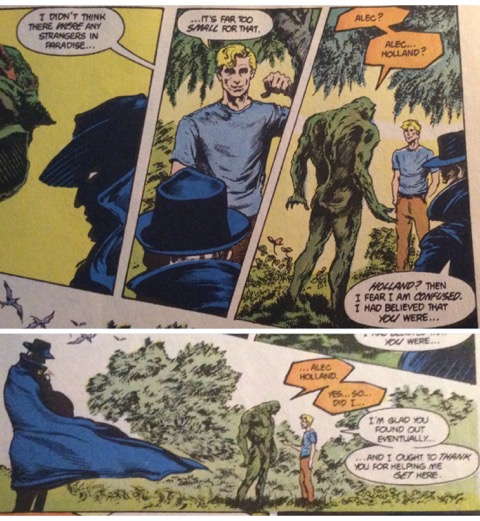 Swamp Thing learns Alec Holland’s soul was trapped in the Realm of the Just Dead, unable to move on to Heaven because of his refusal to forget about his skeletal remains. For a decade, Holland’s ghost haunts the bayou, waiting for his Swamp Thing alter-ego to some day return and give his corpse a proper burial 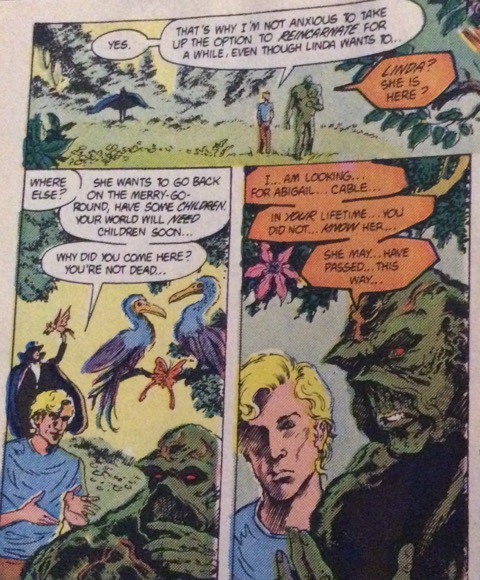 In his final moments in heaven, Swamp Thing has the opportunity to reunite with Linda Holland. He declines and moves on with Phantom Stranger.

The Stranger takes Alec to seek permission from the Spectre to enter Pandemonium. 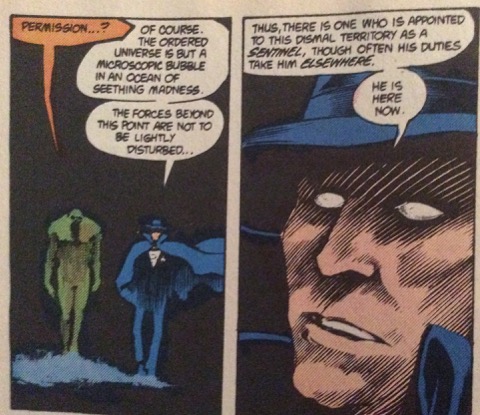 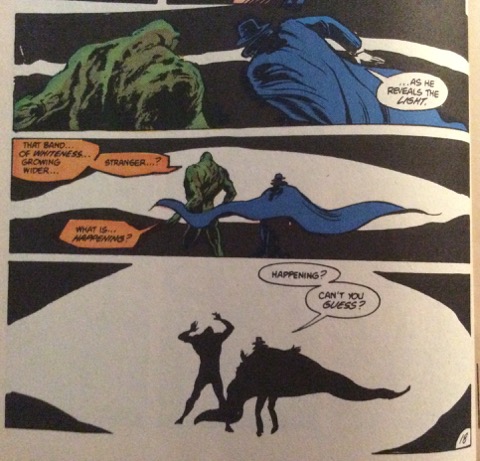 The Spectre says Abby has been consigned to Hell and must stay there; he will not side-step God’s predestine plans. Abby returning to life would render life meaningless. 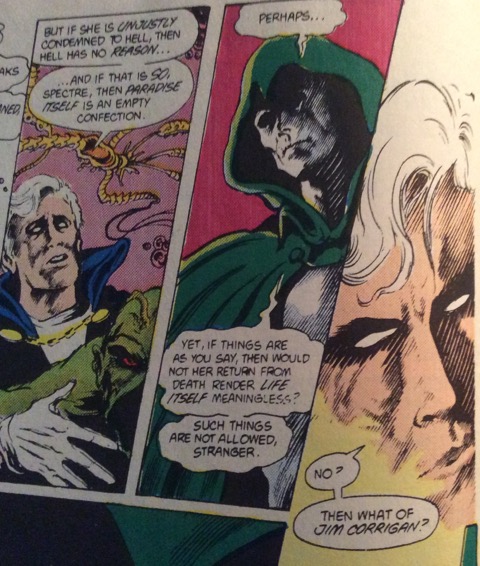 The Stranger coerces Spectre and reminds him of Jim Corrigan’s rebirth. Stranger’s cleverness amuses the Spectre and lets them pass. They are allowed to proceed to Hell. 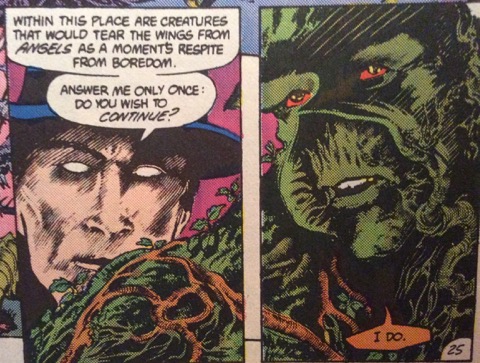 As another phase in the journey begins, another ends and the Stranger must hand Swamp Thing over to Etrigan, to continue forward into Hell.

Etrigan offers to escort him for a fee; a flower from Phantom Stranger’s lapel, the one plucked from the Western slope of Heaven. 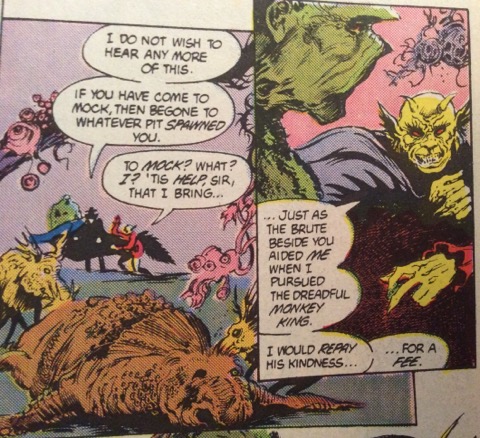 Etrigan recalls the last time Swamp Thing and he met, while fighting the Monkey King. -see SOTST #27. You may recall when Jason Blood arrives in Louisiana, warning Abigail of some looming and impending doom on the horizon…

Demons, Muttlecrunch and Flutch greet Etrigan with mockery for carrying the flower from heaven. He ignores the taunts and asks if they’ve seen Abby. Muttlecraunch is preoccupied with Sunderland, who dared to polish his demon hooves with a rag rather than his tongue—as punishment, he rips out the general’s tongue. Swampy looks on in terror

Etrigan and Swamp Thing proceed forward until they encounter… ARCANE! who’s wasting away in a pile of death, rotting, insects and filth. To Arcane, it seems like he’s been festering and suffering in hell for years. His slow, suffering is played out in what seems like a timeless torture. Arcane has lost all sense of time in hell. He asks Swamp Thing, “how many years have I been here?”

Swamp Thing responds, “since yesterday”. Arcane loses his mind in terror. Less than a day of suffering in hell feels like a lifetime. 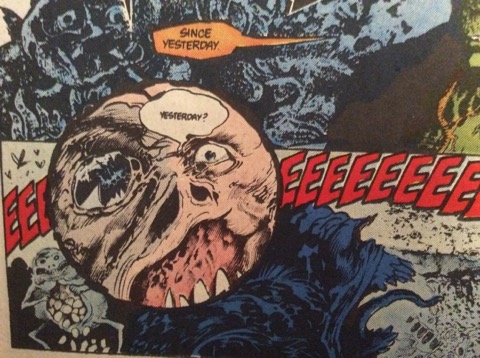 Not far from Arcane, Abby’s body lies on the ground surrounded by demons, parasites. Enraged, Swamp Thing goes to her. 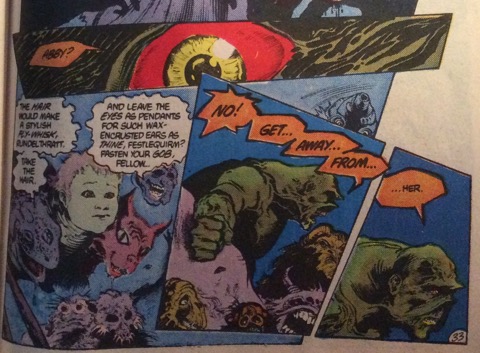 Demons, Rundelthratt and Festlequirm debate over how to use her body parts. Swampy pushes past them.

As Swamp Thing collects Abby’s body, Etrigan breaks into a rhyming monologue as he cooks up a route out of hell. He vanquishes demons who are trying to stop Swamp Thing from taking Abby, and opens a door/portal making a hole in space and time to usher Swampy and Abby back home. The long heroic travel to bring Abby back to life ends in a cacophony of  demonic proportions. All in all, not a terrible first Hell visit for Swampy.

In a last ditch effort, Arcane bites ST’s ankle. Abby and Swamp Thing fall into Etrigans portal and escape into a black void…

When Swamp Thing wakes, he’s back home in the bayou. Moore does a fantastic job of creating a chaotic, larger than life story (pun intended) and ends it with what feels like-a whisper.

Abby wakes, healthy and whole. She’s oblivious to what has occurred. She is startled to have woken up in snow.
To her surprise, Alec is crying. 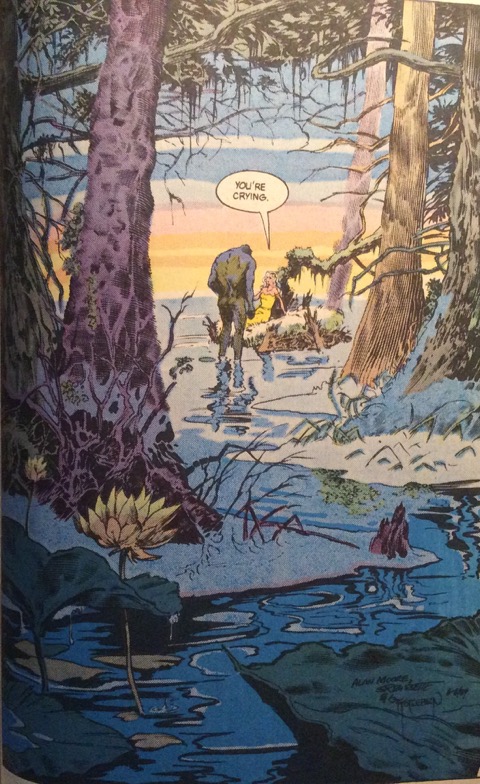